For bringing education and hope to young girls, amid the trauma of war 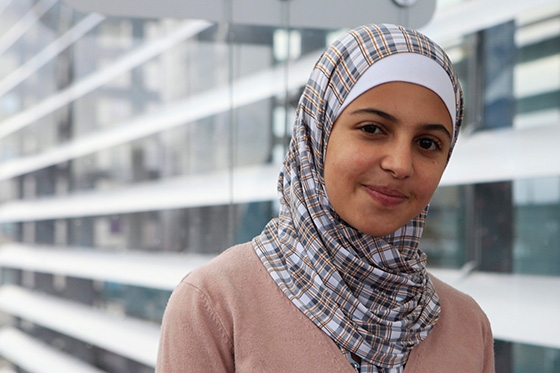 Muzoon Almellehan was in ninth grade when she fled her home in Syria in 2013. She was from the ancient town of Dara’a, the cradle of the Syrian uprising. Dara’a had seen the first protests against the regime, and some of the first crackdowns against the local population. After violence shut down the city’s schools, Almellehan and her family fled to Jordan, among the earliest in a sea of refugees that now numbers more than 5 million.

But Almellehan was also among the first — and the youngest — of Syria's refugees to work for change.

She and her family lived in the Za’atari and Azraq refugee camps in Jordan, and her focus from the beginning was education, and opportunities for girls and young women. Almellehan enrolled in the camp schools, but she soon saw that many refugee girls — some as young as 13 and 14 — were dropping out of class and getting married.

“I was lucky, because I was in a camp where there were schools,” Almellehan says. “I was lucky because my parents believed in education.”

Despite her age, Almellehan began walking through the camps, from tent to tent, to speak with parents about the value of education and the risks of early marriage. At every turn, she urged them to send their daughters back to school.

“Girls must get an education,” Almellehan says. “It’s the best protection for girls. If a mother is not educated, how can she help her children? If young people are not educated, who will rebuild our country?”

Relief organizations began to take notice. Almellehan became a campaigner for UNICEF. And when another high-profile teenager — the Nobel Peace Prize laureate and Asia Game Changer Malala Yousafzai — came to visit the Za’atari Camp, she went out of her way to find Almellehan. Malala had heard about her work, and Almellehan’s classmates told Malala that they had been inspired by Almellehan, and stayed in school because of her.

“She has faced so many difficulties in getting educated,” Malala said of Almellehan. “But she remains totally committed. We want a Malala-Muzoon army to inspire young girls to stand up for their rights.” Soon the young Syrian was being referred to as “The Malala of Syria.”

Today Almellehan is 18 years old and working to complete secondary school, with the hope of one day attending university and becoming a journalist. Above all, she remains committed to advocating on behalf of all girls denied an education around the world, especially her sisters from Syria.

“We need education, because Syria needs us,” Almellehan says. “Without us, who will bring peace?”