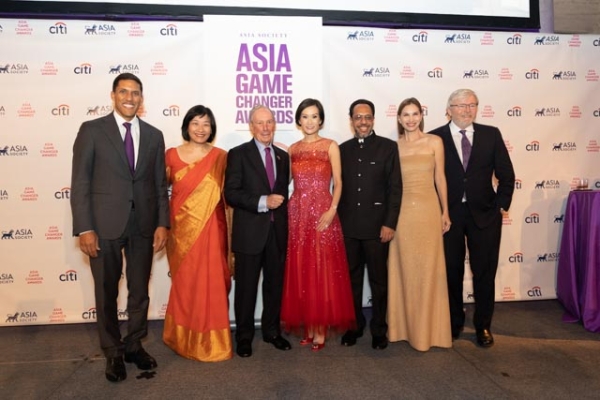 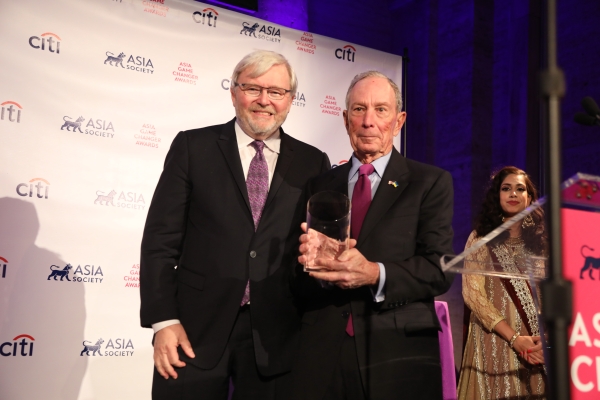 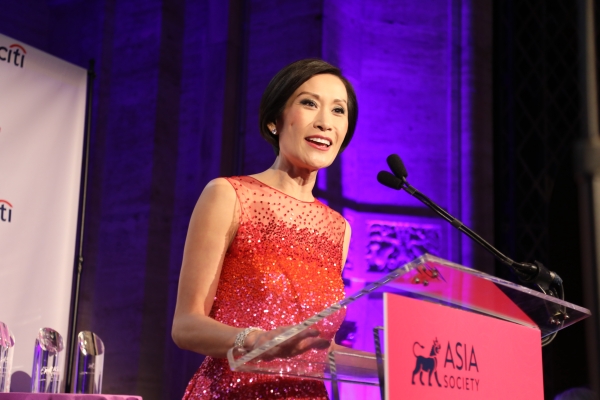 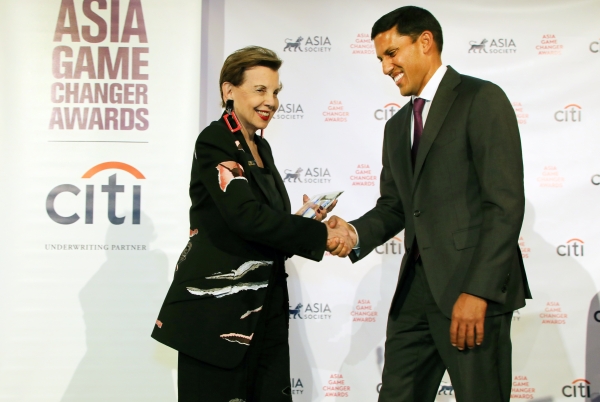 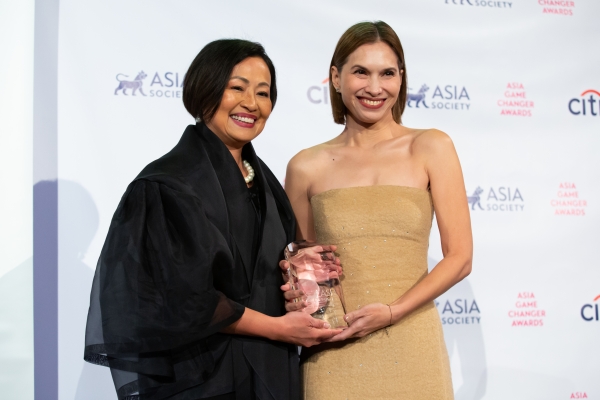 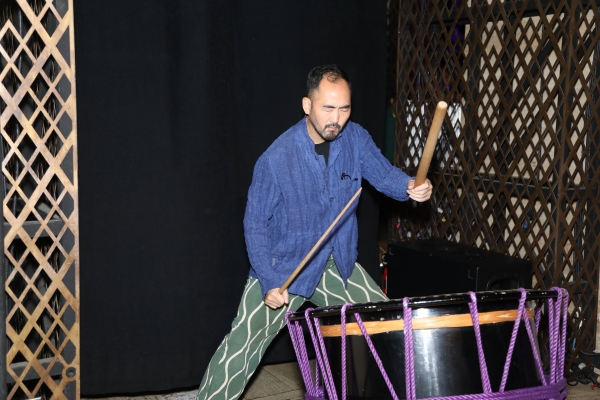 Guests are invited to take their dinner seats by the sounds of a rousing Taiko drum. (Ellen Wallop/Asia Society) 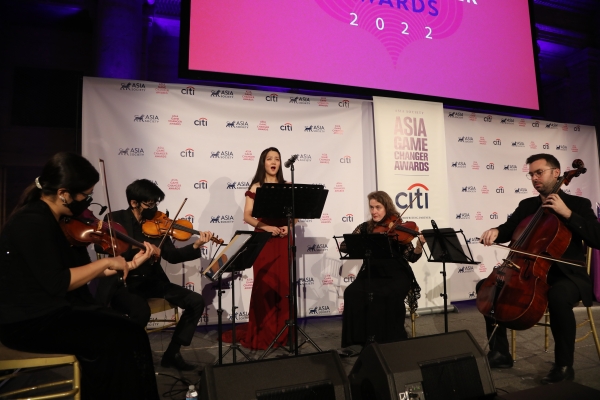 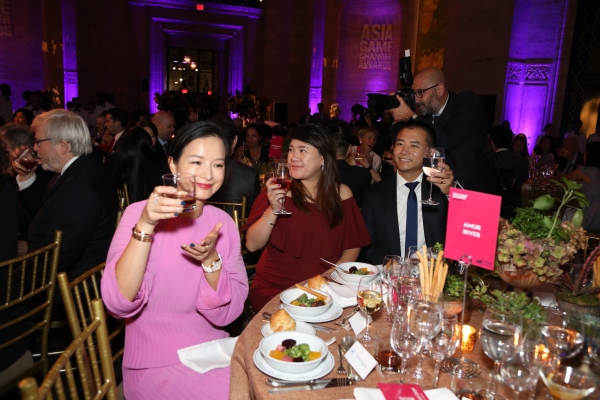 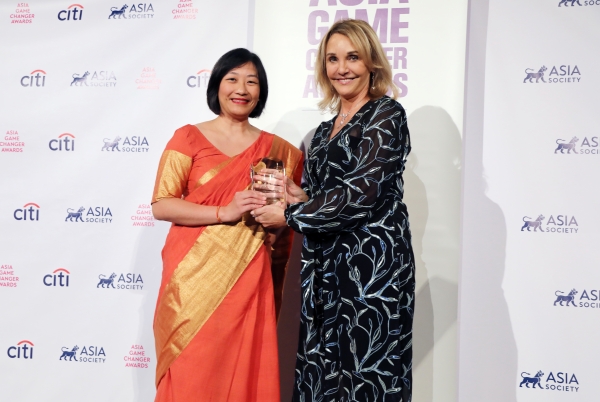 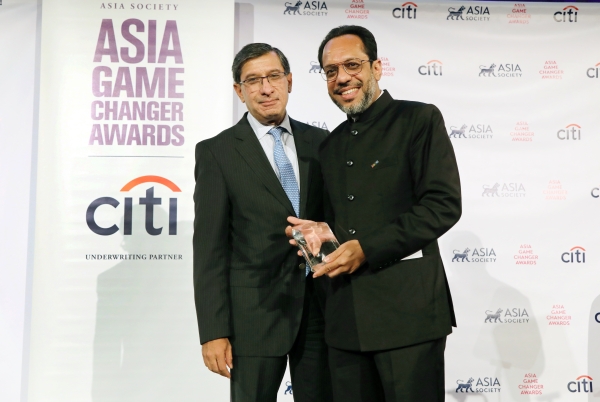 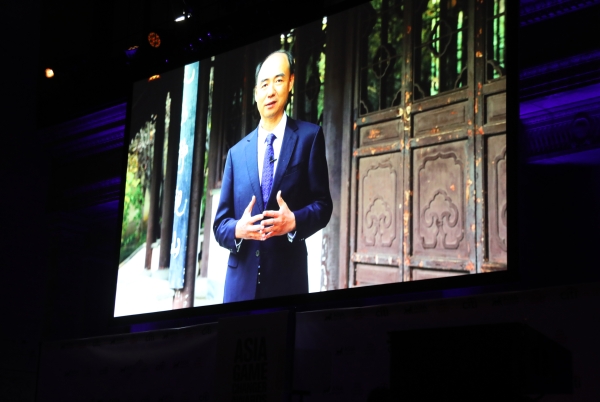 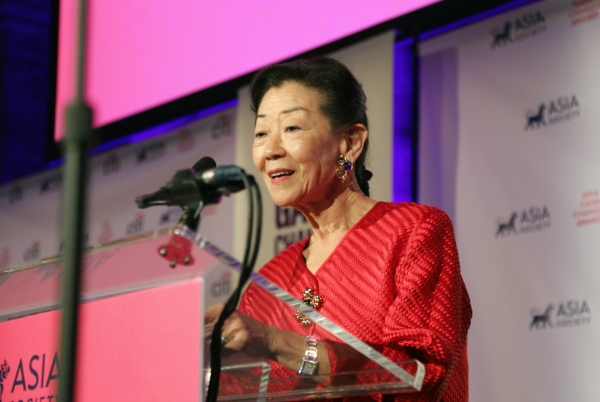 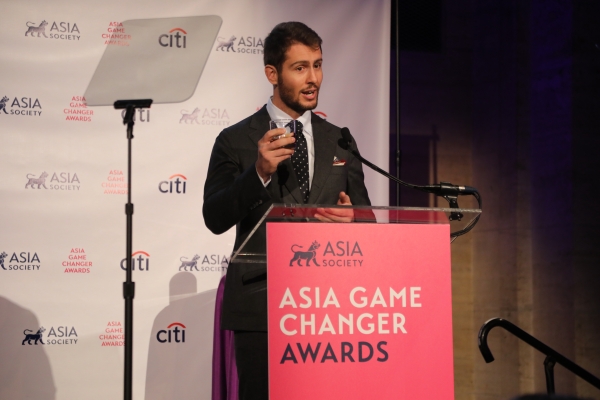 Raphael Lautrette leads a toast on behalf of Rémy Martin. 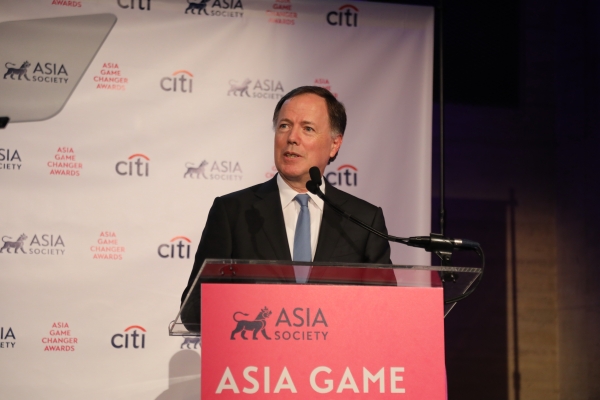 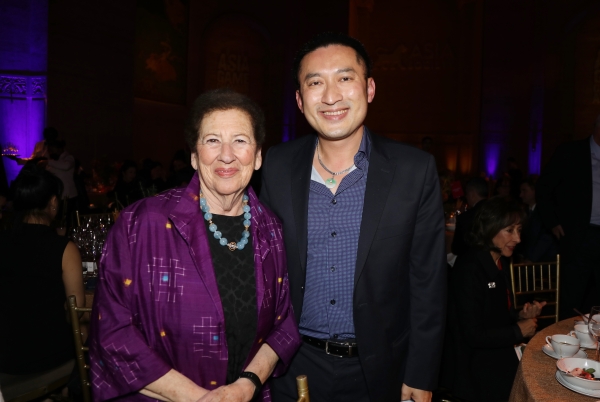 NEW YORK  — The Asia Society celebrated its ninth annual Asia Game Changer Awards in the Great Hall of Cipriani’s grand lower Manhattan location on Thursday, October 27, saluting the work of a diverse group of inspiring leaders who have made strides in combatting climate change

This year marked the first time that the awards have focused on climate-related achievements.

“Through their efforts, these Game Changers are moving the dial on this most difficult of areas because they care about the planet’s future. They are changing our reality because of their determination to move towards a peaceful, prosperous and sustainable future,” said Asia Society President and CEO Kevin Rudd, in his opening remarks.

The evening, held in partnership with Founding Partner Citi, was emceed by Ida Liu, Global Head of Citi Private Bank.

Michael R. Bloomberg, New York City’s former three-term mayor and the UN Secretary-General’s Special Envoy for Climate Ambition and Solutions, was the first honoree of the night, stepping up to accept a Lifetime Achievement Award.

“The Asia Society’s collection of programs make it one of our most important cultural institutions. For decades, it has also been a bridge-builder and an advocate for strong partnerships between Asia and the U.S,” he said.

He emphasized the importance of timely, coordinated action on climate, stating: “An all-in approach to fight climate change is so important because the threats are sadly continuing to get worse, not better. Public and livelihoods are at stake around the world right now. We really don’t have a day to waste.”

Bloomberg introduced British politician Alok Sharma, who was honored for his leadership as president for COP26.

Sharma said: “I can say from the vantage point at the end of my presidency that many of our partners in Asia are truly at the vanguard of this ambitious and absolutely urgent climate action. I’ve been struck by the scale of ambition and innovation during my visits across Asia.”

By 2050, energy-poor nations currently home to half the world’s population could produce as much as 75% of global emissions. Under the leadership of its president, awardee Dr. Rajiv J. Shah, the Rockefeller Foundation has created a $10 billion Global Energy Alliance for People and Planet to help those low- and middle-income countries accelerate and scale their energy transitions.

“The fight against climate change is not just an effort to protect the survival of our planet and our environment. It also the greatest single opportunity that we will ever have to extend the reach of opportunity and dignity to billions of people who are still left behind,” said Shah.

Awardee Nanette Medved-Po, the founder and chairwoman of the social enterprise HOPE and non-profit plastic credit program PCX, used her acceptance speech to question the definition of progress in a capitalist system.

“Business as usual fails. We need to reexamine what success should look like. If a company posts millions of dollars in profits but is responsible for the destruction of the planet or for damage to public health and welfare, can they truly be said to have created value?” she asked. “These are not new ideas but they are urgent. The world cannot afford for us to continue to try to get it right.

Midway through the evening, guests enjoyed a musical interlude from Korean-Chinese soprano Yulan Piao and the Momenta Quartet. They performed the elegy “Sounds Ever Slow” by Chinese composer Huang Ruo, who intended the piece to be a commentary on global crises such as climate change and war.

Imagery from “Coal + Ice,” an immersive documentary photography project examining the causes and consequences of the climate crisis organized by the Asia Society’s Center on U.S.-China Relations, provided a counterpoint to their number.

The program continued with veteran Chinese climate activist Ma Jun, who was honored for his work on promoting pollution-related transparency as director of the Institute of Public & Environmental Affairs (IPE). There, he developed the mobile app Blue Map, which visualizes air, water, ocean, and soil quality data to help the public monitor corporate emissions.

“It is encouraging to see the world coming together to address pressing challenges to our planet home, but surging energy prices and rising geopolitical tension have made major economies ramp up fossil fuel production, which will have a profound impact on global climate response,” said Ma. “Rarely in history has a decade been so critical to the future of humanity. There is no time to lose.”

After Ma, special Sheeran Prize awardee Kristen Kagetsu, co-founder and CEO of the social enterprise Saathi, took to the stage to describe her work providing sustainable solutions for menstrual hygiene to women and girls in India.

“We need to address both inequality and the climate crisis when developing solutions, because both are intertwined,” she said.

Arunabha Ghosh, founder-CEO of the policy research institution the Council on Energy, Environment and Water (CEEW), accepted his award with a call to greater mutual understanding.

“Climate change is only the second greatest challenge facing humanity. The greatest challenge facing humanity is a lack of empathy, a lack of understanding of our fellow human beings from other cultures,” he said. “Being right is not the same as being able to listen to others. We’ve got to create the conditions on which common ground can be found.”

She closed out the evening in a video address.

“I’ve been on the giving end of the Game Changer Award to so many worthy recipients over the years, so I understand the impact of such a distinct honor from such a distinct organization,” said Yang. “To now have this award in my name is something for which I’m not only truly grateful, but will cherish with a profound sense of responsibility.”