Asia Society honored Indra Nooyi, the barrier-shattering chairman and former CEO of PepsiCo, as 2018 Game Changer of the Year at the fifth annual Asia Game Changer Awards. In a dazzling ceremony held Tuesday night in lower Manhattan, the India-born Nooyi, who served as PepsiCo’s chief from 2006 until her retirement earlier this month, was recognized for her transformative stewardship of the iconic American company.

Former U.S. President Bill Clinton presented Nooyi with the honor, recognizing her work to steer Pepsi toward healthier products in spite of investor pressure not to.

“Yes, she’s my friend,” Clinton said. “And I’d be here under any circumstances. But she’s the real deal.”

Under Nooyi’s leadership, PepsiCo experienced remarkable financial success. But in her acceptance speech, the pioneering executive cited achievements that transcended the company’s bottom line. “I believe that a company has to be more than creating value for shareholders, but for society as a whole,” she said. “I ran a company that championed women, sustainability, health, and wellness. A company that lifted people up and built bridges. A company that did well by doing good. These were the values from my first days in India to my last days at Pepsi. They’re also the values of the Asia Society.”

In addition to Nooyi, Asia Society recognized eight other individuals and groups on Tuesday: Wang Shi, the Chinese real estate developer and great advocate for environmental sustainability; Mira Rai, child soldier turned champion distance runner from Nepal; Munjed Al Muderis, a doctor who fled Iraq only to become a pioneering surgeon in Australia; the founders of Koolulam, a musical initiative buildings bridges through song in Israel; the remarkable, award-winning Afghan Girls Robotics Team; heroes who saved lives during Japan’s Fukushima nuclear disaster; the incomparably brave and determined White Helmets of Syria; and, in their first-ever appearance on American soil, survivors from this summer’s incredible rescue at Thailand’s Tham Luang caves.

Adul Sam-on, one of the 12 Thai boys whose rescue captivated the entire world, was joined on stage by Ekkapol Chantawong, the boys’ soccer coach, and Naronsak Osatanakorn, the local governor who coordinated the international group of rescuers with efficiency and grace.

“I hope this experience inspires people to start living for others,” Osatanakorn said. “That would be a game changer for the world.”

It was a night to celebrate remarkable women from across Asia. Nooyi, a daughter of India turned celebrated leader of U.S. corporate giant. Rai, an internationally celebrated runner from a country, Nepal, where athletic opportunities for girls and women are scarce. And the Afghan Girls Robotics Team, a group of remarkable young women who overcame tremendous obstacles — and personal tragedy — to thrive in competitions around the world.

Speaking on behalf of the Afghan girls, Roya Mahboob, founder of the Afghan Citadel software company, said: “We need to cast aside the misconceptions of the past and embrace the potential of Afghan girls and women to succeed.”

The Asia Game Changer Awards was also an occasion to recognize those who have braved extraordinary risks to save lives. Syria’s White Helmets, a group of volunteers pulled from all walks of life, have rescued many thousands of innocent civilians trapped in the country’s civil war. The heroes of Fukushima worked tirelessly in the desperate days after the 2011 earthquake to contain a crisis that threatened Japan. And Dr. Al Muderis, who fled Iraq and endured many trying months as a refugee in Australia, pioneered a surgical procedure that has given injured men and women the gift of mobility.

“I dream that one day we’ll wake up and not spend money on war machines, but [rather] foresting the desert and managing the earth’s large population,” he said.

But before the 2018 class of Asia Game Changers parted ways, they made time for music. Koolulam, whose sold-out concerts in their native Israel have created a sensation, convened their first-ever performance outside their homeland. As Koolulam founder Or Taicher directed proceedings from the stage, the assembled guests, native to dozens of countries from around the world, stood and, in unison, clapped their hands, danced, and sang. It was living proof that, as President Clinton said a few hours before, “our differences make life interesting — but our common humanity matters more.” 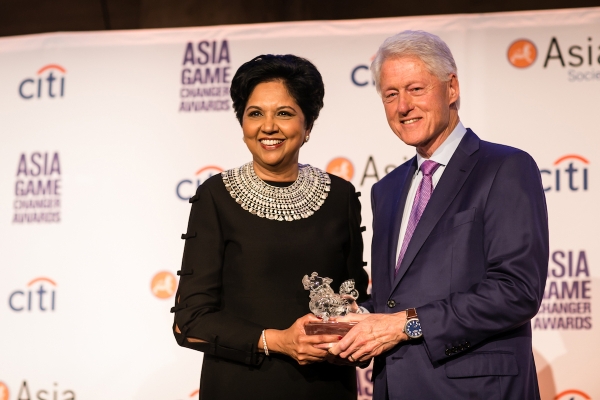 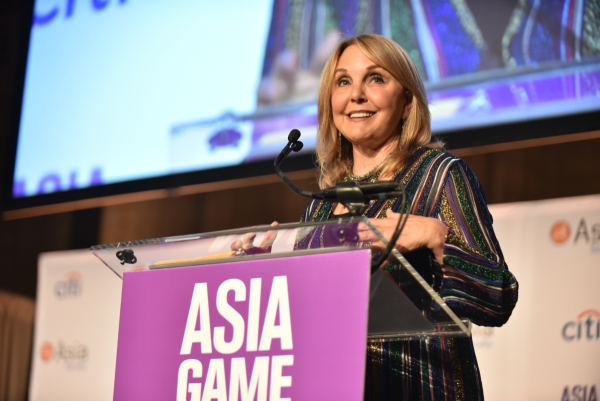 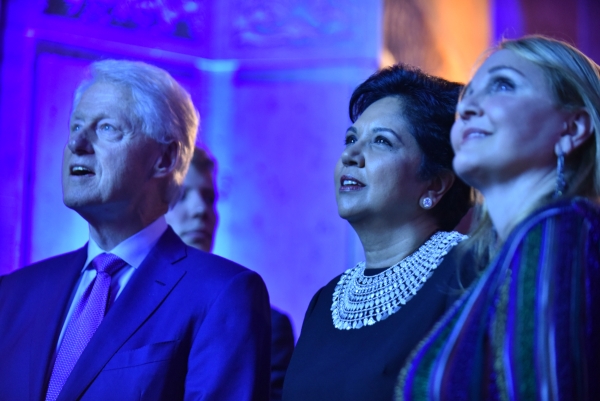 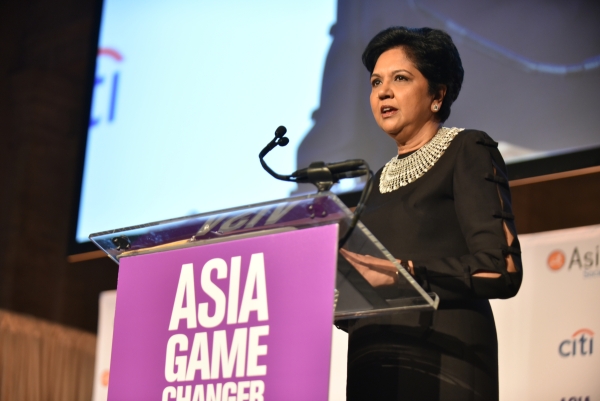 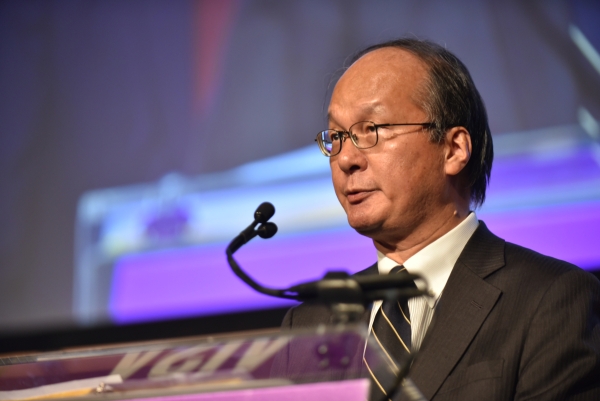 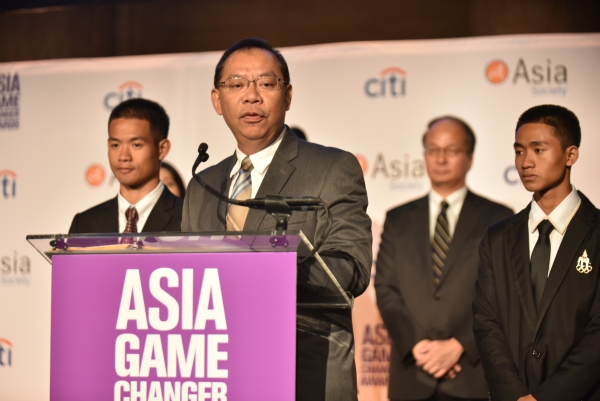 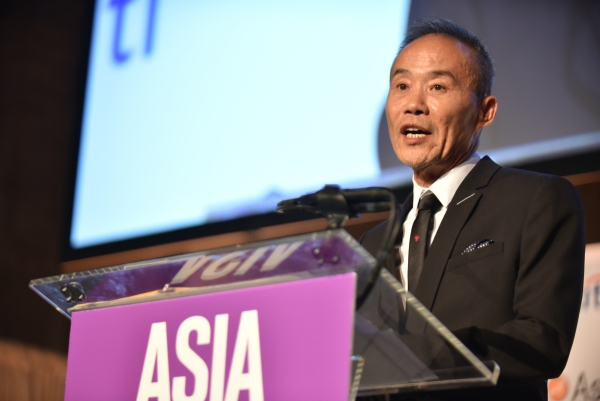 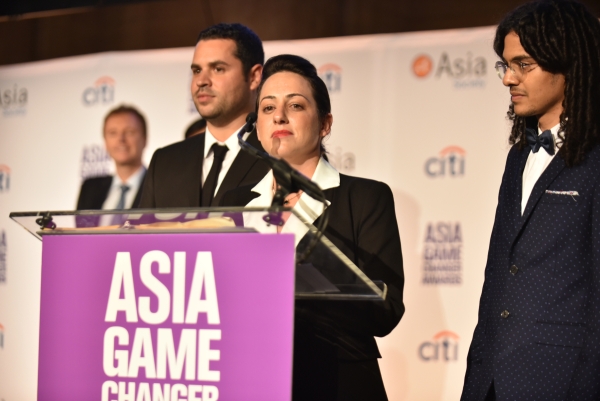 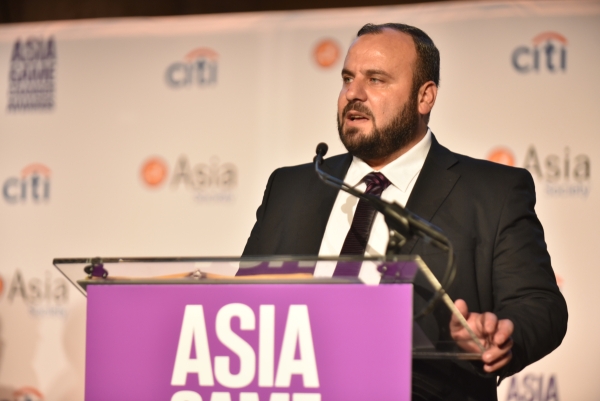 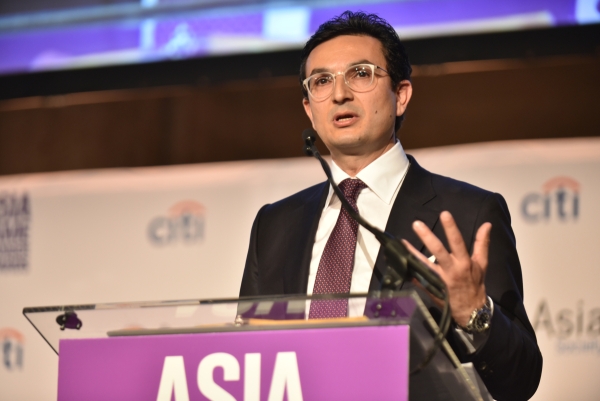 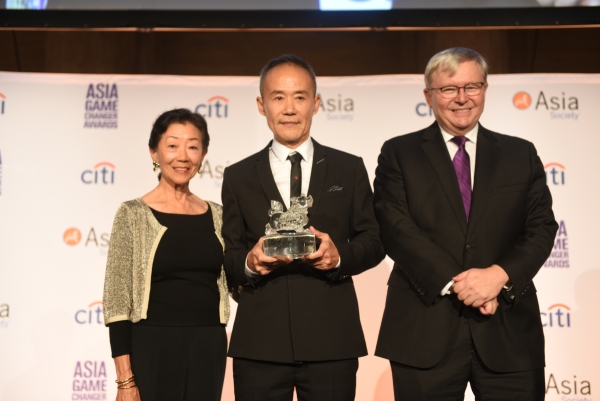 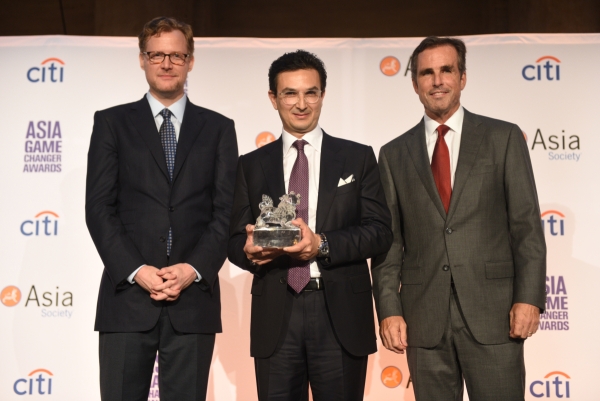 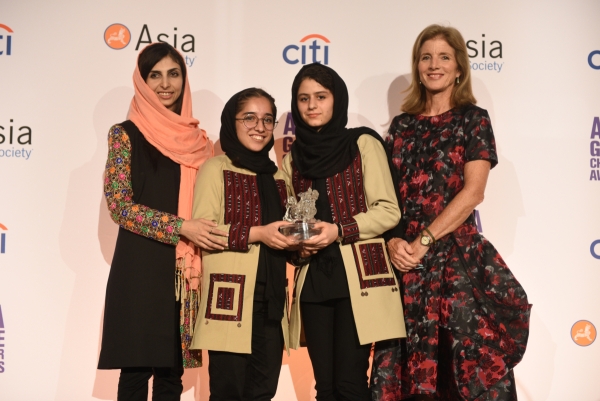 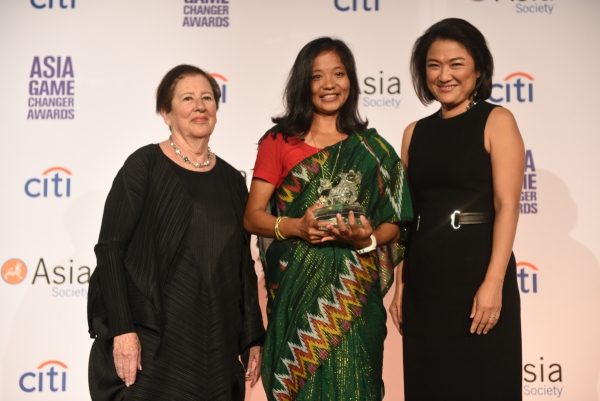 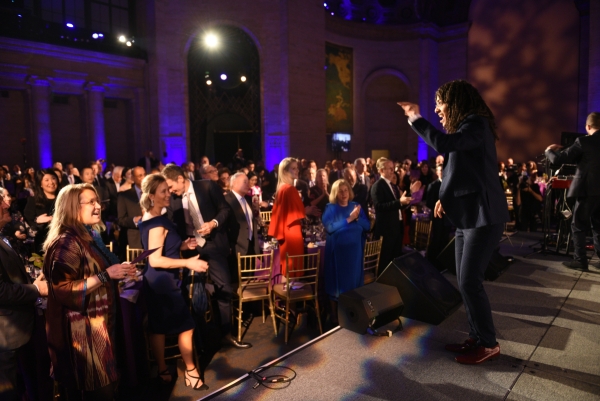 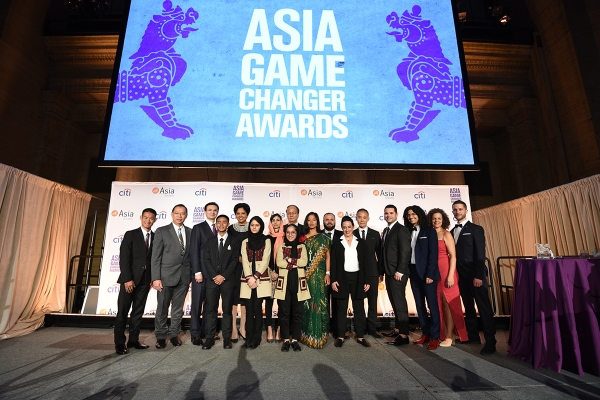 All the Asia Game Changers from the class of 2018 pause for a group photo. (Jamie Watts/Asia Society) 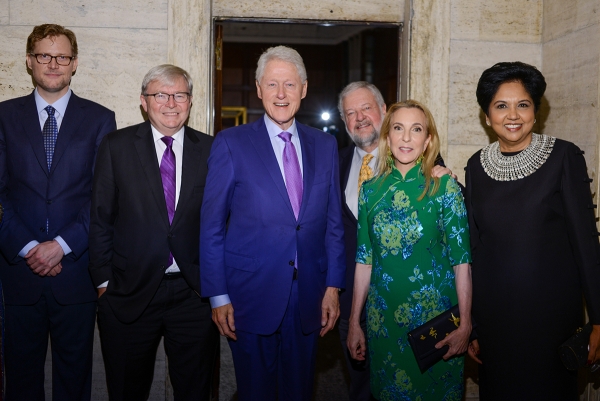 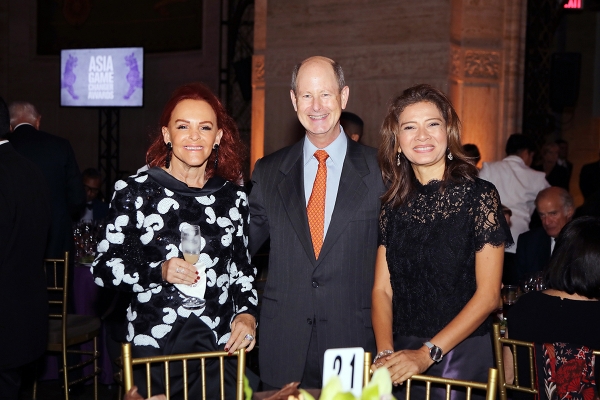 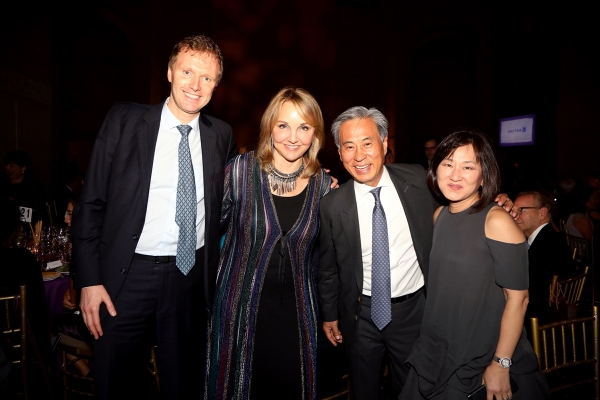 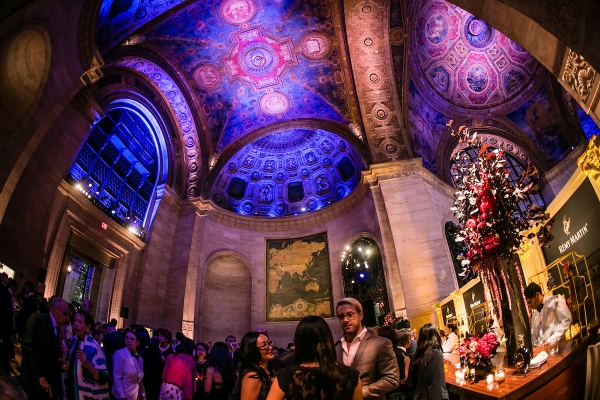 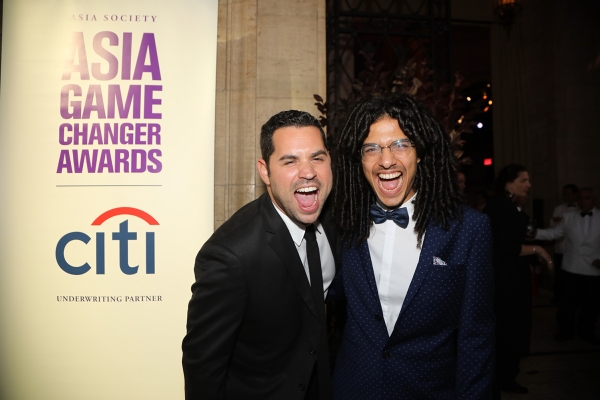 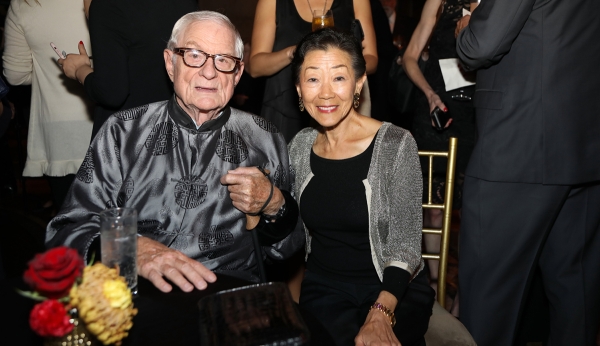 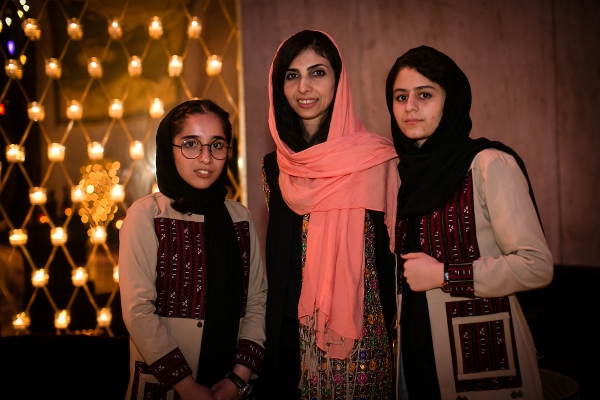 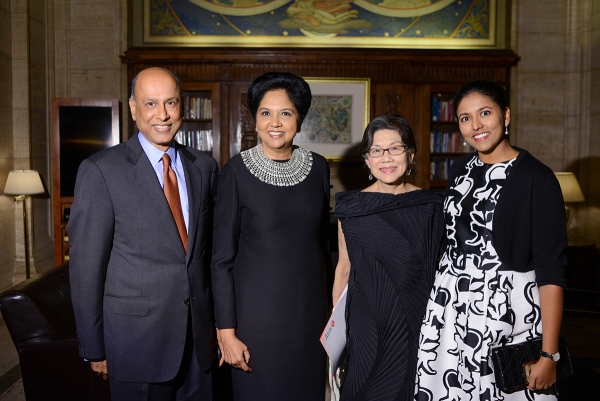 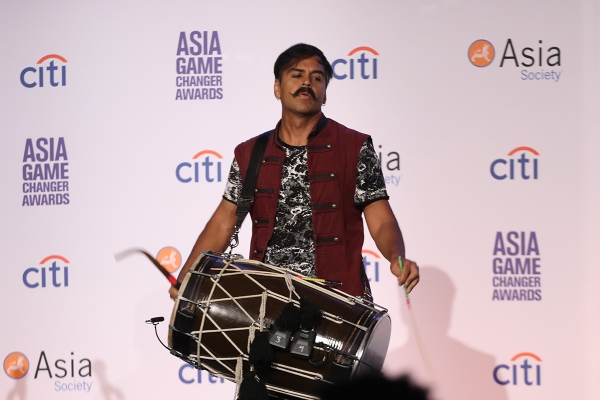 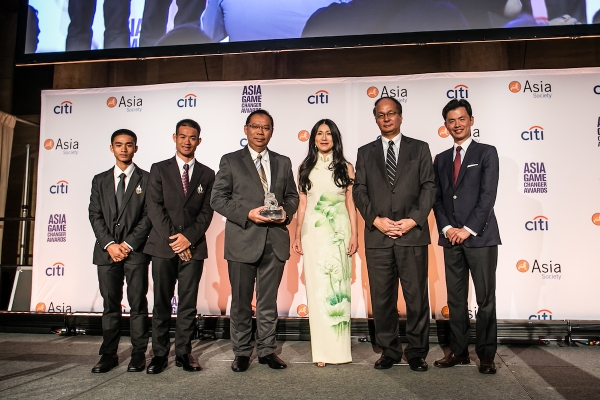 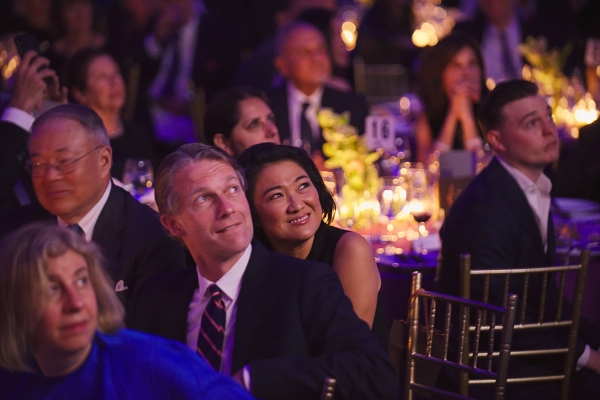 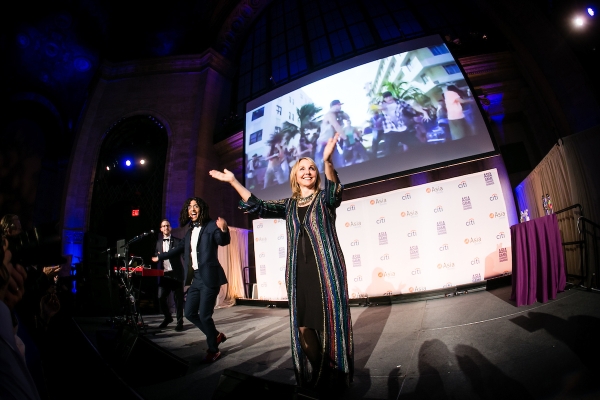