For battling stereotypes, and terror, from the air 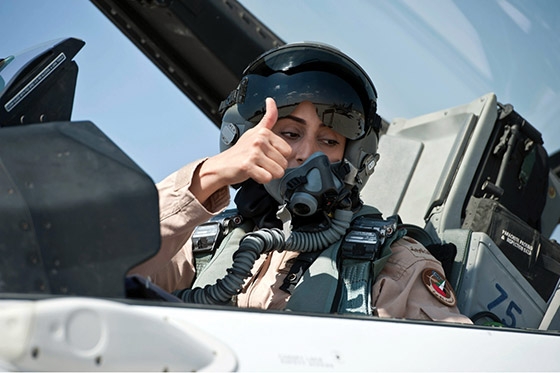 Mariam al-Mansouri was a teenager in the United Arab Emirates (UAE) when she first dreamed of becoming a pilot for her country’s military. There was just one problem: women weren’t allowed. Her dream seemingly a non-starter, al-Mansouri nevertheless joined the army in the hopes that the rules would one day change. Eventually, they did.

Al-Mansouri was one of the first women to join the UAE Air Force Academy, and upon graduation in 2007, she changed the game by becoming her country’s first female fighter pilot. But her service has taken her well beyond those initial symbolic steps. In 2014, she was called to combat, and today Major Mariam al-Mansouri flies her F-16 Fighting Falcon to lead airstrikes against ISIS in Syria.

Al-Mansouri has developed a large social media following, with some calling her “Lady Liberty” and “ISIS’s nightmare.” Her country’s ambassador to the United States has said al-Mansouri is a role model for women throughout the Arab world. But al-Mansouri has emphasized that she’s never felt the need to compete with her male peers; “competing with oneself,” she says, “is conducive to continued learning.” In an interview, she added, “A woman’s passion about something will lead her to achieving what she aspires, and that’s why she should pursue her interests.”