"The essence is the structure." 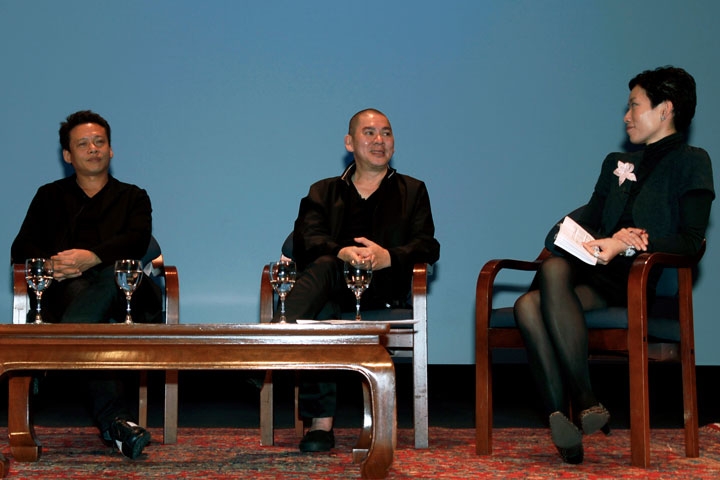 NEW YORK, November 15, 2009 — Malaysian-born, Taiwan-based filmmaker Tsai Ming-Liang and his long-term collaborator, actor Lee Kang-Sheng, met with the audience at the Asia Society New York Center for the Faces of Tsai Ming-Liang film series (November 13-21, 2009). During an on-stage discussion conducted by series curator La Frances Hui, Senior Program Officer of Cultural Programs, Asia Society, the director talked about the meticulous structure underlying each of his spare screenplays. In other highlights, Lee Kang-Sheng provided insights into how actors interpret the director's scripts, and Tsai revealed that he remains in a constant state of anxiety from first drafting a script to the finish of a film.

Watch the video above to hear Tsai Ming-Liang's remarks, or read the transcript below.

H : A lot of your films, actually pretty much all of them, are not narrative-based. They are usually made up of a lot of scenarios, composed mostly with static camera, employing very long takes with very little dialogue. What do you actually put in your screenplays? How do you describe to your actors and people involved in the filmmaking what you are trying to do?

T : The film that's without plot the most is probably Face (2009). It is made up of little scenarios. But basically, it still has a complete structure, which requires a lot of thinking. I studied Western drama in university. I studied plays by Shakespeare, Ibsen and Brecht, and also Greek tragedies. I really like these classic drama literatures. But I am aware of my medium, which is not theater. It is film. It is something I think about very much. I am also a filmgoer. I have seen many narrative films, films with plots. Some are wonderful and I like them. But when I make my own films, if I also make narrative-based films with plots and performance, then my films would be just like those. Everyone knows what sort of impact those films could make. That impact can only reach a certain level. It can't go any further.

I also received training making TV dramas. I made different narrative dramas focusing on different professions. I got really good training making those. For example, I made one about the situation of female workers in a textile factory. We wrote a script telling the stories of their loves and lives. That's a very straightforward kind of expression. With a narrative structure, the audience would understand and could feel, that's if you could make it well. But before the shoot, I felt very puzzled. Why did I always use the same way to tell a story? Why should I use the same way to tell the story of a female worker? It's as if there's only one way to deal with this subject. But could that really express the situation of these female workers? I felt I needed to think more.

I had this experience of observing the female workers in the factory. Once I saw them taking lunch break. A thousand female workers appeared in the hallway when the bell rang. It took them about five minutes to walk through this long hallway to enter a big canteen. They then lined up for food, and then ate. The whole process took less than 20 minutes. When they finished eating, the canteen became empty again. This image was shocking to me. Oh, that's the way they took lunch.

Since then, my screenplays became very simple. The more I wrote, the simpler they got. There's no need to describe any world because I just don't know. And I can't imagine it. I must see it first. But I have a rough idea what I want to do. During script writing, I spend a lot of my time thinking about the structure. That structure could take a year to come up with. I also think about the ways to express that structure. The process could take a very long time. Each of my screenplays is very thin. It doesn't have dialogue. It only includes actors' basic movements. The essence is the structure. The structure guides me through the work process. People who work with me have worked with me for a long time. They all know how to work with my screenplays, to scout locations, to find finances. The actors also get the same screenplays. They aren't exactly clear what they are going to do.

To me, a screenplay is not a film. It's always evolving, developing. It continues to transform during shooting.

I must confess that from the time of script writing to the completion of a film, I am in a constant state of anxiety because nothing is certain.

H: Lee Kang-Sheng, we have seen you live the life of Xiao Kang for many years. We've seen you watch television, cook, go to the bathroom, and stare into deep space. What kind of instruction do you get from Tsai Ming-Liang on the set?

L: He does have a complete structure in mind even though we only get a brief synopsis, possibly with a lot of meanings behind. There are instructions on actions. For example, with going to the bathroom or drinking a glass of water, there are many ways to complete the action. It's up to me to decide how to carry it out, how to complete the action in order to make the action interesting and lively.