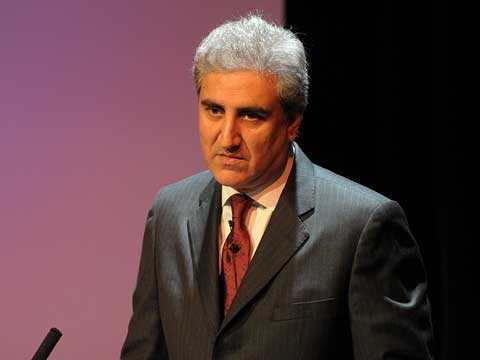 NEW YORK, August 19, 2010 - The floods devastating Pakistan are “the most extraordinary crisis imaginable" according to US special envoy Ambassador Richard Holbrooke.

His grim assessment came as Pakistan made an impassioned plea to the international community to accelerate emergency aid.

"Pakistan needs your immediate help," Foreign Minister Shah Mehmood Qureshi told an audience at Asia Society's New York headquarters. He said the current level of donations is well short of what is needed to combat what could be his country's worst natural disaster.

"What the immediate emergency response is asking for is $460 million and that will only cater to about six to eight million people for 90 days," said Qureshi. "As the floods recede and the damage asesment is done, then only will we know how serious the challenges are."

Special Representative for Afghanistan and Pakistan Ambassador Richard Holbrooke, Foreign Minister Qureshi, USAID Administrator Rajiv Shah and billionaire financier George Soros were among the speakers from the government, private sector, and international humanitarian organizations to join in the discussion.

Qureshi and Holbrooke acknowledged both Pakistan and the international community's response had initially been slow. "It started slowly in terms of international perceptions because a flood isn’t like an earthquake or tsunami, which hits immediately, and it ends,” said Holbrooke, a former Chairman of Asia Society.

At least one-fifth of the country is now innundated with water, killing an estimated 1,600 people and affecting over 20 million people in 74 districts, striking hard in key extremist and terrorist strongholds in the North, as well as, in southern Punjab.

The aid appeal came prior to a UN General Assembly special session Thursday, at which Secretary of State Hillary Clinton announced an additional $60 million in US funding for relief operations.

Financier George Soros, whose Open Society Institute and Soros Foundations work on the ground in Pakistan said "there is a certain amount of fatigue in responding to these disasters... [but] we have to come to terms with the fact that they are in fact connected, that there is climate change."

When asked if there was a connection between the floods and climate change, USAID's Shah said "while it’s very hard to attribute any single event to what we’re doing to our global environment it is very clear that that trend is leading to a greater number of large hurricanes, a greater number of floods, hotter and dryer conditions in places that are dependent on weather and rainfall for agriculture, and it’s making it very difficult for the least resilient, the most lower income communities of the world to survive."

Christopher MacCormac of the Asian Development Bank, which is leading the effort to assess the flood damage, said much of the economic infrastructure of the area has been destroyed. Major crops and livestock have been devastated, which has taken a large toll on Pakistan farmers. ADB has said it would loan Pakistan $2 billion to help the country rebuild.

A number of heads of international humanitarian organizations working in Pakistan spoke briefly about their current rescue and relief operations on the ground including George Rupp, President of the International Rescue Committee, Raymond Offenheiser, President of Oxfam America, and Save the Children's Gorel Bogarde.

Bogarde said she is most concerned about the outbreak of water-borne diseases, such as cholera, and emphasized what children most need is food, clean drinking water, and shelter: "We need everyone to step up to the plate."

More information on relief efforts can be found at www.state.gov/pakistanflooding. Community members interested in giving immediate assistance can text the word “SWAT” to 50555 to contribute $10 to UNHCR's life-saving flood relief efforts on the ground.