The Revolutionary Barons of the Sea 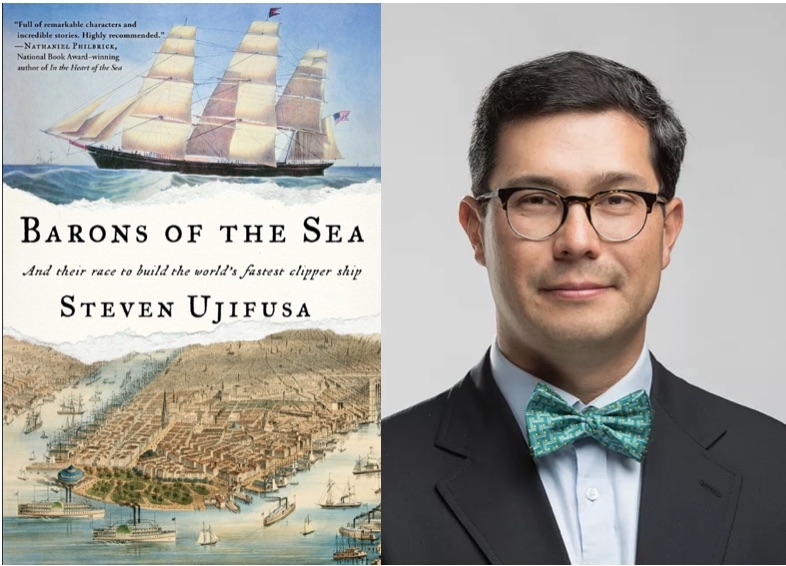 Steven Ujifusa, author of Barons of the Sea

The American clipper ship, a technological marvel, established the trading relationship between China and the U.S. in the mid-19th century. In Barons of the Sea: And Their Race to Build the World's Fastest Clipper Ship, the maritime historian Steven Ujifusa chronicles the ship’s invention and how it propelled a golden age of trade and commerce, forever changing the economies and societies of both countries. Among the risk-taking daredevils and shrewd businessmen who owned clipper ships were Franklin Delano II, the grandfather of Franklin Delano Roosevelt, and Abiel Abbot Low, whose family endowed Columbia’s Low Library. Join us for a conversation with the maritime historian Steven Ujifusa, author of Barons of the Sea, and Nick Platt, former U.S. Ambassador and President of Asia Society.

For more information about the book, visit:  https://www.stevenujifusa.com/barons-of-the-sea.

Steven Ujifusa is a historian and a resident of Philadelphia, Pennsylvania. His second book, Barons of the Sea: And Their Race to Build the World's Fastest Clipper Ship, tells the saga of the great 19th-century American clipper ships and the Yankee merchant dynasties they created. For this project, he was the recipient of a 7-week writing fellowship from the MacDowell Colony in Peterborough, New Hampshire. In 2012, The Wall Street Journal named his first book A Man and His Ship: America's Greatest Naval Architect and His Quest to Build the SS United States (Simon & Schuster) as one of the 10 best nonfiction books of the year.  He has appeared on National Public Radio, CBS Sunday Morning, and numerous other media outlets. He is a frequent contributor to the urban history website PhillyHistory.org. On May 14, 2019 Steven will join the ranks of Tom Wolfe, William Manchester, David McCullough, and Ron Chernow, as the recipient of the 2019 Washington Irving Medal of Literary Excellence from the St. Nicholas Society, for distinguished service to the City of New York.  Steven will be the second youngest, only after Tom Wolfe.

Ambassador Nick Platt  serves as President Emeritus of Asia Society. Ambassador Platt joined the Asia Society as its fifth president in 1992 after a thirty four-year career as an American diplomat in Asia. With consular postings in Hong Kong, China and Japan, Ambassador Platt’s diplomatic career culminated with his service as US Ambassador to the Philippines (1987-1991) and Pakistan (1991-1992). He is a Member of the New York Council on Foreign Relations, a Director of Fiduciary Trust Company International, and a Member of the International Advisory Board of the Financial Times.

Barons of the Sea: And Their Race to Build the World's Fastest Clipper Ship by Steven Ujifusa can be purchased at AsiaStore or through the AsiaStore website.

Click for directions
Buy Tickets
Members: $20; Students/Seniors: $30; Non-Members: $40
20190424T183000 20190424T200000 America/New_York Asia Society: The Revolutionary Barons of the Sea Join nautical historian Steven Ujifusa and Amb. Nick Platt as they chronicle the technological marvel that first enabled trade between China and the U.S., the clipper ship, which knit together two nations for centuries to come.