The Changing Landscape of Museums Today 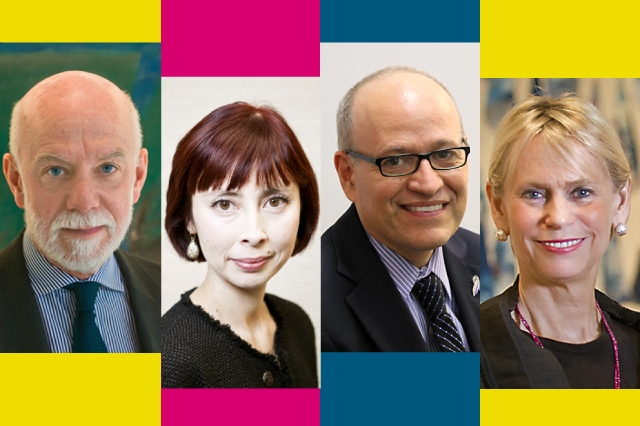 On the occasion of the launch of the Asia Society Museum publication Making a Museum in the 21st Century, join Richard Armstrong, director of the Solomon R. Guggenheim Museum and Foundation; Melissa Chiu, director of the Hirshhorn Museum and Sculpture Garden; and Tom Finkelpearl, commissioner of the New York City Department of Cultural Affairs, for a panel discussion on issues facing museums today. Moderated by Peggy Loar, interim vice president for global arts and culture and museum director, Asia Society.

Making a Museum in the 21st Century

In November 2013 Asia Society convened the inaugural Arts & Museum Summit in Hong Kong, bringing together museum leaders from across Asia, Europe, and North America. In addition to transcripts and selected discussions and speeches from the Summit, Making a Museum in the 21st Century also presents new essays in an essential overview of pressing issues faced by museums around the world in a new era of audience engagement.
Making a Museum in the 21st Century will be available for purchase at the event.

The Arts & Museum Summit is part of a new initiative of Asia Society's Arts & Museum Network, the goal of which is to strengthen arts communities through the creation of opportunities for professional exchange and to share knowledge and expertise among museum professionals globally.

Can't make it to this program? Tune in to AsiaSociety.org/Live at 6:30 pm New York time for a free live video webcast. Viewers are encouraged to submit questions to moderator@asiasociety.org or via Twitter or Facebook using the hashtag #AskAsia.

Richard Armstrong has served as the director of the Solomon R. Guggenheim Museum and Foundation since November 2008. Armstrong works with senior staff to maximize all aspects of the Foundation’s operations: permanent collections, exhibition programs, acquisitions, documentation, scholarship, and conservation. Previously, Armstrong was The Henry J. Heinz II Director of Carnegie Museum of Art, where he also served as chief curator and curator of Contemporary Art. From 1981 to 1992, he was a curator at the Whitney Museum of American Art, where he organized four Biennials, as well as several other exhibitions.

Melissa Chiu (editor of Making a Museum in the 21st Century) is the director of the Smithsonian’s Hirshhorn Museum and Sculpture Garden. Prior to the Hirshhorn, she was director (2004–2014) and curator for contemporary Asian and Asian American art (2001–2004) at Asia Society Museum, New York. At Asia Society, she negotiated groundbreaking international loan exhibitions from countries including Vietnam, Pakistan, and Myanmar (Burma); led the opening exhibitions and programs for two new buildings in Hong Kong and Houston; and launched a contemporary art collection focused on photography and video. She convened a series of cultural discussions among international museum leaders, including the Arts & Museum Summit and the U.S.-China Museum Leaders Forum. She has written and edited scholarly publications including Asian Contemporary Art (Thames and Hudson) and Contemporary Art in Asia: A Critical Reader (MIT Press).

Tom Finkelpearl is the commissioner of the New York City Department of Cultural Affairs. In this role he oversees city funding for nonprofit arts organizations across the five boroughs and directs the cultural policy for the City of New York. Prior to his appointment by Mayor Bill de Blasio, Commissioner Finkelpearl served as executive director of the Queens Museum for twelve years starting in 2002, overseeing an expansion that doubled the museum’s size and positioning the organization as a vibrant center for social engagement in nearby communities. He also held positions at P.S.1 Contemporary Art Center, where he worked on the organization’s merger with The Museum of Modern Art, New York, and served as director of the Department of Cultural Affairs Percent for Art program. His publications include Dialogues in Public Art (MIT Press, 2000) and What We Made: Conversations on Art and Social Cooperation (Duke University Press, 2013).

Peggy Loar (moderator) is the interim vice president for global arts and culture and director Asia Society, Museum. Most recently, as interim director and president of the Corcoran Gallery of Art and College of Art & Design, Washington, D.C., she facilitated the merger of the Corcoran with the National Gallery of Art and George Washington University. Loar served as the founding director (2008–2012) of the new National Museum of Qatar, Doha. She was the founding president and director of The Wolfsonian Museum and Research Center, Miami and Genoa, Italy; and COPIA: The American Center for Wine, Food and the Arts in Napa, California. Previously Loar held positions as director of the Smithsonian Institution Traveling Exhibition Services (SITES) where she was awarded the Smithsonian Gold Medal for Distinguished Service; the first program director of the Institute of Museum Services (now IMLS); and curator of education and assistant director of the Indianapolis Museum of Art. For eight years she was president of the U.S. International Council of Museums (ICOM), headquartered with UNESCO in Paris