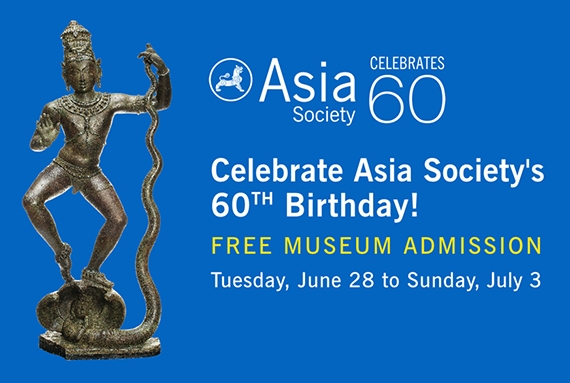 Asia Society celebrates its “official” birthday on Tuesday by offering a week of free admission to the museum, from Tuesday, June 28, to Sunday, July 3. In addition, visitors will also have a chance to win an exhibition catalogue of their choice.

On June 28, 1956, Asia Society filed its certificate of incorporation with the State of New York seeking to establish an organization “for the purpose of helping to bring the peoples of the United States and Asia closer together in their knowledge and understanding of each other and each other’s way of life.” Among its stated goals was “to foster cultural interchange between the United States and Asia through the encouragement of significant projects which will increase mutual respect and appreciation of the other’s cultural heritage and achievement.”

Expressing his congratulations, New York City Mayor Bill DeBlasio commented: “On the occasion of its milestone anniversary, I applaud Asia Society and its dedicated staff and supporters for enriching the cultural vitality of this great city and the world.”

Visitors to Asia Society will be able to see the following exhibitions:

In and Out of Context: Asia Society Celebrates the Collections at 60, an exhibition commemorating the legacy of collecting and exhibiting Asian art that Asia Society founder John D. Rockefeller 3rd (1906–1978) and Blanchette Hooker Rockefeller (1909–1992) set in motion for Asia Society. Historical and contemporary works are juxtaposed to trigger distinctive ways of thinking about the artworks, their creators, and how they are displayed.

Also on view in the lobby and A-level is a display of 60 photographs and a short film capturing key moments in Asia Society’s 60-year history.

The museum is open from 11 am to 6 pm Tuesday through Sunday.