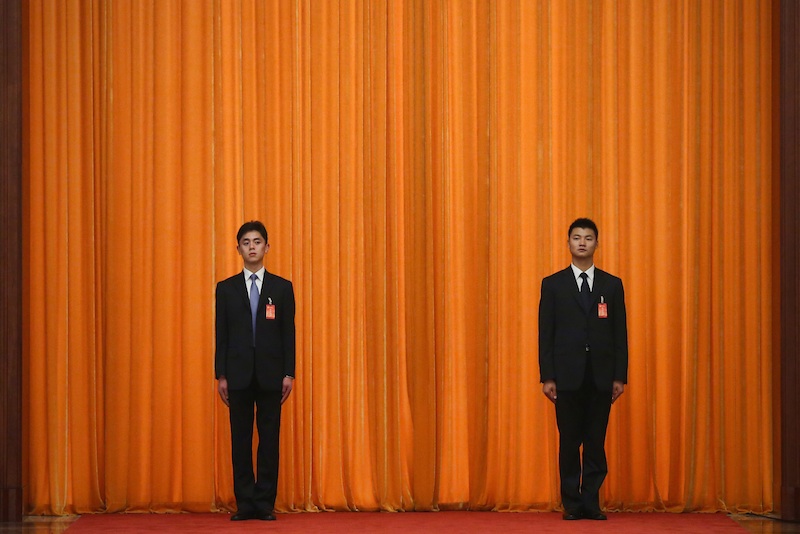 Two soldiers dressed as ushers guard in front of a curtain during a meeting of the opening session of the 18th Communist Party Congress at the Great Hall of the People on November 9, 2012 in Beijing, China. (Feng Li/Getty Images)

Former U.S. Ambassador to China Winston Lord has some advice for those attempting to make predictions about the upper echelons of Chinese leadership: don't even try.

"I believe 'China expertise' is an oxymoron," Lord, who served in Beijing from 1985 to 1989 and later became Assistant Secretary of State, said in a recent video interview at Asia Society Studios in New York. "It’s very difficult to predict, [which] particularly goes with the secretive nature and the non-democratic nature of their system."

Talking to Jonathan Landreth, managing editor of ChinaFile, a new online magazine from Asia Society's Center on U.S.-China Relations, Lord's three-part interview, embedded below, is the latest in a series of Asia Society talks with China watchers about China's ongoing leadership transition. (For links to the other videos in the series, as well as all other Asia Society content on the topic, please click here.)

Lord, who said he was "pretty confident" Vice President Xi Jinping will replace General Secretary Hu Jintao next week as the 18th National Congress wraps up in Beijing, stated that even U.S. State Department officials can't agree on what what to expect from China's next generation of leaders. To prove this point Lord recounted an anecdote from Vice President Joe Biden's trip to China last year:

Shortly after that trip, I talked to two officials in the U.S. government who were with Biden and Xi Jinping throughout that trip. In the morning, one of these officials said, "This is someone we can deal with — he’s pragmatic, he’s open, he’s warm. I think this is really good news for our relationship." In the afternoon I talked to another official in these meetings. He said, "This guy looks dangerous to me. He looks like he’s a nationalist. I think we’re going to have trouble in our relationship." So I rest my case.

In the third clip, embedded below, he said it will be interesting to see how China's new leaders address the 1989 Tiananmen Square massacre — if at all. Ackowledging the event could "send a signal that maybe they’re going to get serious about loosening up that terrible repressive system," Lord said.

Watch all three of the Lord clips below. Complete transcripts appear below each video in italics.

The 'Oxymoron' of China Expertise

We’re now witnessing a transition in the most populous country in the world, and one of the most important countries in the world, namely China. And it is completely different from earlier transitions since the Communists took over in 1949.

When I went with Kissinger and Nixon, and of course for decades afterwards, essentially the leader was anointed either by virtue of revolutionary or military credentials, like Mao Zedong, Deng Xiaoping, or picked as a successor like Jiang Zemin, and even the current leader, Hu Jintao, was picked by Deng Xiaoping. So, for the first time, we’re seeing sort of inside bargaining and consensus forming over the next leadership. It remains totally secret now. The good news is it’s collective leadership; the bad news is the Chinese people have no way of knowing how these leaders are actually chosen.

Every time there’s a leadership change in China, people start forecasting what’s going to happen. That’s very dangerous. I believe "China expertise" is an oxymoron. It’s very difficult to predict, particularly goes with the secretive nature and the non-democratic nature of their system. What we’re pretty confident is that on November 8, two days after our election, we will find that a man named Xi Jinping will be the leader and the number two person will essentially be a man named Li. Beyond that, we don’t even know on the standing committee, which is the ruling inner body of the entire Communist Party apparatus, now consists of nine people, whether they’ll be seven or nine, for example.

Also, there’s going to be a broader transition. They’re going to be replacing the top 300 people in the party on the Central Committee, something like two-thirds of those will change, as will the next body, the Politburo of about 30 people, many of those will change. So this is a huge transition. Also, the military commission, which is the ruling body of the largest standing army in the world, will undergo major changes. So this is across the board.

As far as predicting what the next leader, for example Xi Jinping in this case, will do, we really ought to be very cautious. For example, nobody would’ve suspected that Deng Xiaoping would have instituted such sweeping reforms in China and opening to the outside world. Everyone thought his successor Jiang Zemin was somewhat of a lightweight: good-natured, well-meaning, but not really much of a mover and shaker. In fact, during his tenure, China’s economy grew rapidly. Their diplomacy, with the help of a very able foreign ministry, came back from isolation after the Tiananmen Square massacre in 1989. Hong Kong was returned to China and U.S.-China relations were put on a more solid foundation. So he exceeded expectations.

Finally, the current leader, Hu Jintao, many people thought was a closet political reformer. He was close to early liberal leaders in China. He looked at political reforms when he headed up the party school which trains Communist officials. I met him during that period and all of us were hopeful that he would loosen up the political system. Instead they’ve gone backwards and it’s more repressive now than it was when he took over.

Xi Jinping and the 'Perils of Prediction'

Let’s talk for a moment about Xi Jinping, almost certainly the next leader of China. Like other recent collective leadership, he has earned his way to the top through bureaucratic and economic performance in various provinces as well as building alliances among various factions in the Communist Party and the military. Superficially, it looks hopeful in terms of reforms, and even relations with the U.S. And I stress the word “superficial."

Unlike previous leaders, in many cases, he has traveled a lot, including to United States. He’s made deals in California. He’s visited Iowa farms. He seems to be looser than the current leadership, which is very constrained in style, and so on. But I would caution anyone to start thinking that we have Thomas Jefferson coming along here.

First of all, I’ve already mentioned how we’ve been wrong on our previous predictions. And in the specific case of Xi Jinping, who I have not met, I can give you an example of the perils of prediction. He was the host for Vice President Biden last year, for a good week or two. They traveled together. They got to know each other extremely well, all of which is good news by the way.

Shortly after that trip, I talked to two officials in the U.S. government who were with Biden and Xi Jinping throughout that trip. In the morning, one of these officials said, "This is someone we can deal with — he’s pragmatic, he’s open, he’s warm. I think this is really good news for our relationship." In the afternoon I talked to another official in these meetings. He said, "This guy looks dangerous to me. He looks like he’s a nationalist. I think we’re going to have trouble in our relationship." So I rest my case.

The coming leadership in China will face a host of major economic and political challenges. But one specific issue, particularly on the political side, has to do with the official verdict on the Tiananmen Square massacre. People like to say "incident" or "situation" — it was a massacre. And we're talking of course June 1989, when the PLA killed at least hundreds of students and other citizens in Beijing.

This is a touchy subject for the Party. They’ve always called these students and others "hooligans." They’ve even refused to let the mothers of the young people who were killed know the exact numbers that were killed and see the recognition of this. Obviously those who were directly involved wouldn’t touch the verdict, they’ve kept it as is. Some hoped that Hu Jintao, the current leader, might deal with this issue because he wasn’t directly involved. That has not happened.

So, it’ll be interesting to see in the next 10 years, and that’s what we’re talking about probably for the new leadership, at least the top of it, whether they grapple with the subject. It’s important because that to me will be a very concrete indication that they’re getting serious about political reform, which they’re going to have to do at some point.

If they acknowledge at least that the demonstrators, the peaceful demonstrators, were patriots and well-meaning — they can say they’re misguided, or whatever they want to say — that will heal a lot of wounds, but more importantly it’ll send a signal that maybe they’re going to get serious about loosening up that terrible repressive system.