Video: The Evolution of Arif Lohar 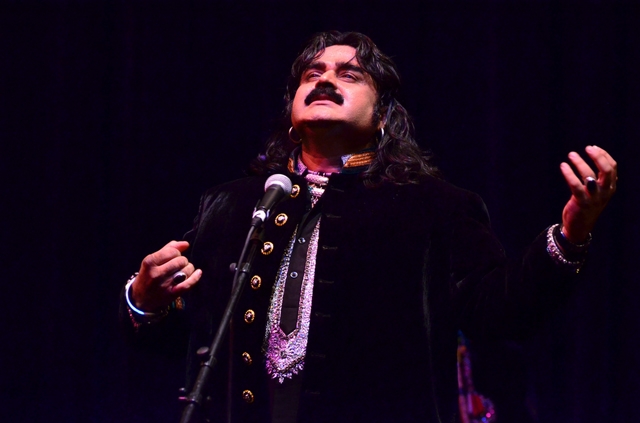 In a special collaboration, beloved Pakistani musician Arif Lohar will be joined by world music songstress Arooj Aftab at Asia Society New York for two concerts on Friday, April 27 and Saturday, April 28. Aftab's inspired songwriting fuses classical Pakistani and Sufi music traditions with contemporary jazz, folk and pop influences, creating a signature sound that has been described as "indigenous soul." Both programs are part of Asia Society's ongoing initiative Creative Voices of Muslim Asia, made possible by support from the Doris Duke Foundation for Islamic Art.

Not surprisingly, both concerts have long since sold out. If you weren't lucky enough to score tickets, you can tune in to a free live webcast of Saturday night's performance at 8:00 pm ET at http://asiasociety.org/live.

For the uninitiated, Arif represents Pakistan's vibrant Punjabi folk music tradition, which he inherited from his father Alam Lohar, the musician responsible for popularizing the unique instrument the chimta (metal tongs) and the musical narrative device jugni in Punjabi folk music. While Arif's music is very much inspired by his father's legacy, Arif has performed not only traditional folk songs but also created music for Pakistan's popular Punjabi film industry.

Although Arif's music has traditionally been popular among the Punjabi-speaking lower and middle-class population, in recent years, a new direction in his musical style has gained him a large younger, urban audience. His popularity among young people rose with his rock version of "Jugni" in 2006 and later with his 2010 performance in Coke Studio, a series dedicated to bringing together artists from different genres such as qawali, rock, pop and ghazal. “We should keep promoting our roots,” Arif said in a 2011 interview with Sonya Rehman, speaking of the new crop of Pakistani singers and musicians. “Survival can only happen when through art you shake hands with the rest of the world.”

However, in the Pakistani imagination, Arif's image can never be separated from his chimta and his sparkling, brightly colored outfits. Below is a look at how the artist's music and distinct sense of style have evolved over the years.

(Please note: Detailed information about the Pakistani film and music industry can be difficult to find on the Internet. Feel free to leave us a comment if you find any errors in dates and names for the videos below, or if you have any other fantastic Arif Lohar videos to share with us.)

Alam Lohar — "Jugni"
Ever since Alam Lohar made jugni popular in the 1930s and 1940s, this narrative device device has been used by many Indian and Pakistani Punjabi musicians in songs that are sometimes spiritual, sometimes romantic and at times political. First is Alam Lohar singing one of his original sufi versions of jugni on Pakistan's national television station PTV (possibly 1940s).

Arif Lohar — "Koka"
A popular song from the film Zindagi (1992), in which Arif acted and sang. This love song is addressed to the lady's multicolored nose ring, whose shine distracts the boy who is smitten by the girl's beauty.

Arif Lohar — "Main Pardesi Shair Tere Wich Pehle Wari Aya"
Another one of Arif's movie songs, from Pardesi (possibly mid-1990s). Lohar is trying to convince the young woman that he is a stranger who came to the city in search of a companion, bearing love in his heart.

Arif Lohar — "Jhumka"
The following video is from the film Musalman (2001), in which Arif made a guest appearance sporting a beard and a turban. The song is dedicated to the beloved's traditional silver earring (jhumka) that moves as she dances at the fair and her waist that shakes when she walks.

Arif Lohar — "Nach Lea"
Arif filmed the following video in China, where he went to perform at the opening ceremony of the Asian Games in 2004. The video shows him sporting a modern look interspersed with clips of him in his traditional garb. In this song Arif is asking the women to dance to the beat of his chimta.

Arif Lohar and Mukhtar Sahota - "Jugni"
In 2006, Arif became popular among a younger, more urban population with his electronic/rock version of the popular song "Jugni" as part of the album 21st Century Jugni in collaboration with British-Punjabi musician Mukhtar Sahota. This version offers existentialist commentary on social life.

Arif Lohar and Meesha — "Alif Allah"
In 2010, Arif and Meesha Shafi's fusion-sufi version of jugni became one of the most popular songs across the country. It also inspired a parody video which was widely shared on social media.

Arif Lohar — "Dum Gutkoon"
And finally a romantic version of jugni from a 2011 Pakistani film. Here the word jugni refers to the female narrator of the song, who is dancing to express her love.