The Musical History of Pakistan 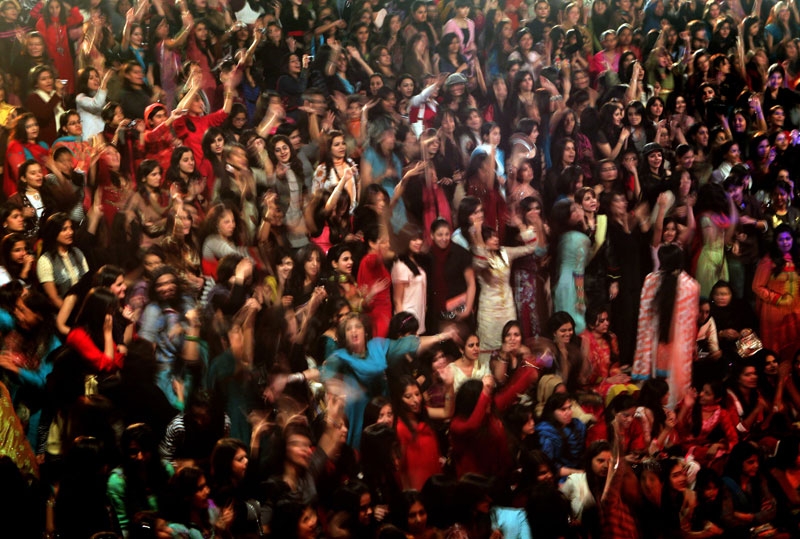 NPR published a piece on understanding Pakistan through its pop-idols on Friday, staying true to the multiple contours of the complex Pakistani society and the constant struggle between identity and what is "cool."

Pakistani music, as diverse as its multiethnic population, ranges from qawwali, a popular brand of music branched from Sufi Islam, to good ol' fashioned rock 'n' roll. It includes diverse elements ranging from music from various parts of South Asia as well as Central Asian, Persian, Turkish, Arabic, and modern day Western popular music influences. With these multiple influences, a distinctive Pakistani sound has been formed. From Pakistan's inception, music was a form of entertainment like anywhere else. But unlike Pakistan's hardline-Islamist image today, society was a just a little bit different back then.

In the 1960s, Pakistan, a place where alcohol was still legal and couples frequented movie theatres hand-in-hand, prospered, and visits from Jackie Kennedy probably helped too. The '70s and '80s saw the rise of political Islam, culminating in the conservative dictatorship of General Zia-ul-Haq. Despite this erratic political landscape, the tradition of Pakistani music remained strong.

Today, I will take you on a tour of Pakistan's music since gaining independence on August 14, 1947.

1940s:
Alam Lohar is a classic cult Punjabi-folk favorite. Born in 1928, Lohar began his career when he was just a teenager. Listen closely and you'll realize why he is considered to be (metaphorically speaking, of course) the grandfather of Punjabi MC, today's biggest bhangra music star. Using a peculiar instrument called the Chimta and an overwhelming singing stamina, Lohar wooed the crowd with the song Jugni, below:

1950s:
With a few exceptions, minorities in Pakistan appeared frequently on TV during the 1950s, singing some of the great music to come out of the entertainment industry. Sunny Benjamin John and Irene Perveen, singers belonging to Christian families, stole the hearts of young Pakistanis with their heartfelt music, their music falling into the ever popular and favorite genre of ghazals, songs of poetic expression. Also, hello color-TV:

1960s:
Ah, the golden years of Pakistan. Music in the '60s took a turn around the world. With the Beatles in the West, Pakistan produced Ahmed Rushdi in the East - arguably, the first disco star of his generation. Ko-ko-Korina, a song that earned a Platinum Jubilee, was so popular in the region it escalated the Pakistani movie industry to great heights. Many renditions of the song appeared in the next few decades both domestically and in Pakistan's next-door neighbor, India. Folks, put your dancing shoes on:

1970s:
The 1970s gave rise to a popular, risqué trend called the "hair dance." Young Pakistanis who attended dance parties were no strangers to this style of dancing. To do the hair dance, one had to shed all their inhibitions, and shake it, literally. The video is pretty self-explanatory:

1980s:
To any Pakistani who grew up in the '80s, the words "Vital Signs" were not measures of various physiological statistics, but a musical band of heartthrobs who sang Dil Dil Pakistan, literally meaning Heart Heart Pakistan. These young, leather-jacket-wearing-motorbike-riding men were patriotic, and Pakistanis realized, "You know what? It's cool to be Pakistani." Styled in Ray-Ban wayfarers, the band members of Vital Signs challenged General Zia-ul-Haq's strict regime and introduced Pakistanis to the world of pop music. Because it was a patriotic song, it remained uncensored. Earlier in the decade, the late Nazia Hassan sang Disco Deewane, or crazy about disco, a song which plummeted to the US Billboard charts, a first for any Pakistani singer. Because the 80s produced some of Pakistan's most memorable pop-stars, you get to enjoy not one but two videos:

1990s:
The U2 of Pakistan, Junoon struggled with promoting their music. The US invasion of Afghanistan left much violence on the streets of Pakistan and thus began a long, ongoing stretch of political instability. One band member, Salman Ahmed, said he made his first political statement by creating a rock band. Junoon's music, which highlighted the corruption of Pakistan's elite (Benazir Bhutto, for instance), got them into trouble. They were banned. Junoon vocalist Ali Azmat considered himself and the band to be "musical guerillas," but the ban only gained in popularity as counter-culture heroes. Watch this fascinating by VH1 documentary, narrated by Susan Sarandon, on Pakistan's greatest rock band:

The 21st Century:
In the early 2000s, the explosion of media gave young artists an opportunity to showcase their talent. A plethora of TV channels saw the emergence of fresh, new faces that are now household names in Pakistan. Halfway through the decade, Coke Studio launched. In this rendition of Live on Abbey Road, Coke Studio has created a fusion of all musical genres. From combining qawwali with bhangra, to ghazals with rock, Coke Studio has brought artists from all over the country into one studio, and made it work. Here's a little sneak-peek into the world of the hit series:

Then there are those artists to come out of Pakistan, of which Nusrat Fateh Ali Khan is considered to be timeless. A frequent collaborator with Peter Gabriel, powerhouse Khan, a qawwali singer who sang for soundtracks of movies such as Dead Man Walking, Natural Born Killer, The Last Temptation of Christ, and Gangs of New York is considered to be the greatest to come out of Pakistan. Time magazine wrote about Khan: "On [his] death in 1997, Westerners were just starting to grasp this musical treasure that Pakistan had given the world-but in South Asia women wailed and men wept as if a god had removed himself from the earth." Take a look:

Who are some of your favorite musical stars? Share your thoughts with us below: