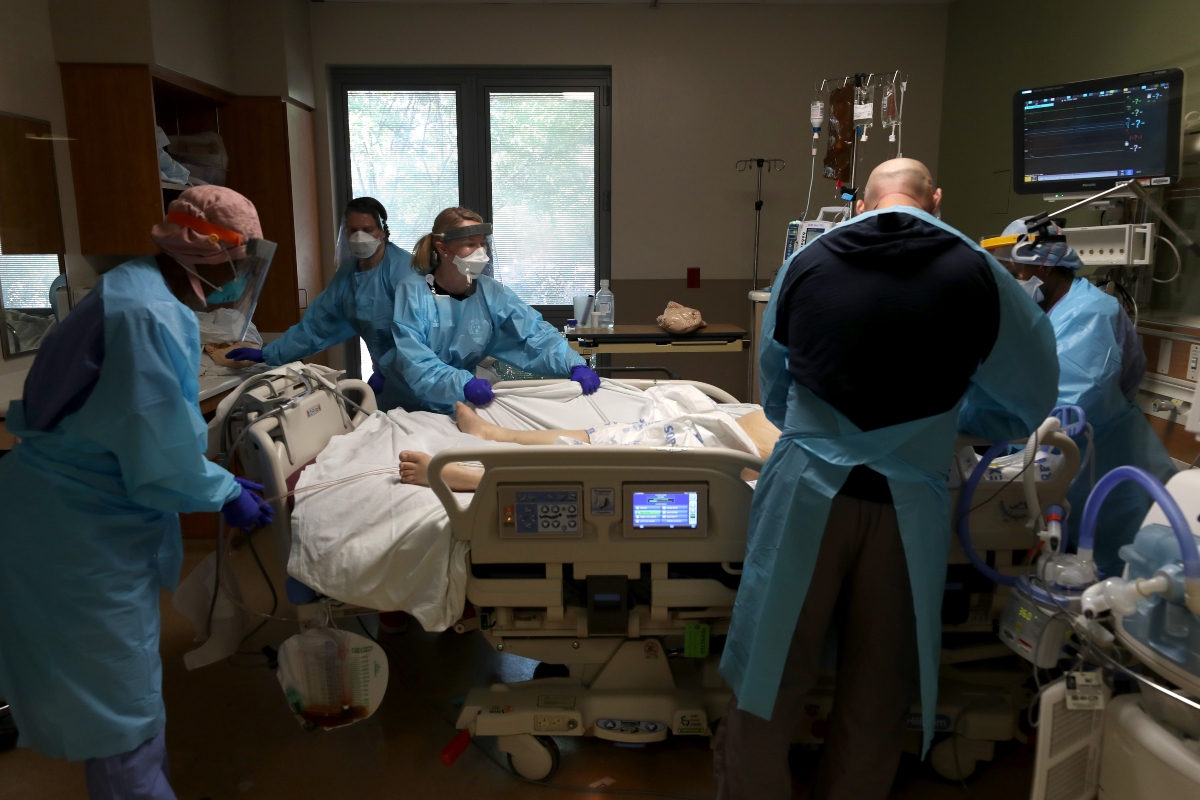 Nurses care for a coronavirus COVID-19 patient in the intensive care unit (I.C.U.) at Regional Medical Center on May 21, 2020 in San Jose, California. (Justin Sullivan/Getty Images)

Since it spread from China to the rest of the world late this past winter, the coronavirus has dominated the global conversation. But there's still so much we don't know. Why do some people get sicker than others? Why are some situations more conducive to its spread while others are comparatively safer? And when will it finish winding its way through the global population?

For medical workers, these questions are a matter of life and death: Doctors and nurses risk their lives treating patients afflicted with a novel illness that defies predictability.

To get a sense of what it's like to treat COVID-19, Asia Blog caught up with Dr. Avinesh Bhar, an Asia 21 Young Leader from the class of 2016. Born in Malaysia, Bhar is something of a Renaissance man — he is board certified in pulmonary, critical care, sleep, and internal medicine, and, for good measure, also has an advanced degree in business. Based in Macon, Georgia, Bhar also manages an integrated sleep and pulmonary virtual practice, Sliiip.

Bhar has spent the last two months treating patients infected with COVID-19. In our conversation, which has been edited and condensed for clarity, he discussed the benefits of telemedicine, the future of health care, and what he'll never forget about this time of his career.

What has struck you most in your time treating coronavirus? What makes the virus so unique and difficult to deal with?

One thing that we’ve learned over the last several weeks is how fast people seem to fall apart. They come in short of breath, requiring a little bit of oxygen, and then take a turn for the worse very quickly. Not all of them do this, and that's another thing: COVID-19 is difficult to predict. We don’t know which patients will decompensate, and when they decompensate, they do it very quickly.

We also don’t really know yet why certain patients are able to fight off coronavirus. Some get mildly ill, some get very ill, and some require hospitalization and intubation.

We’re aware that people with pre-existing conditions, or comorbidities, are more susceptible to dying from COVID-19. But to what extent do factors like one’s sleeping and eating habits contribute?

Typically, a pre-existing condition has to be something that’s been going on for a while — but there’s a lot of gray area. If you have diabetes and poor sleep, for example, does that increase your risk? Or is having really bad diabetes enough? Various things interact with each other, and that we just don’t know the answer right now. But what we’ve seen is that chronic disease is particularly important. I don’t think people with a touch of diabetes, for example, or sugar levels that are slightly above normal are truly at risk. 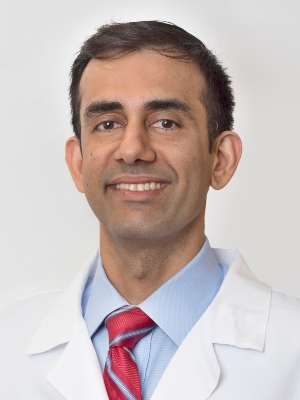 One thing that’s happened since the lockdown is a rise in telemedicine, which is something that you’ve advocated for. Why do you think the medical profession has been slow to embrace it, and how encouraged are you that it will become more widely accepted post-COVID-19?

Physicians are a heterogeneous bunch. You have doctors in rural areas who have been into telemedicine for a while now, out of necessity. They’ve bought into the concept already. But physicians in big cities haven’t needed it because patients can just jump on the subway or take an Uber to see them in person. A lot of doctors have also held onto the idea that they actually have to see the patient, to read body language, etc., in order to treat them best.

But if we’re actually being honest, and assessing how much physical examinations change our diagnoses, the answer is less than we think. And now because of COVID-19, the barriers are slowly coming down. Incentives change behavior.

How else has COVID-19 changed the way we should think about healthcare?

We’re realizing that a lot of treatment can be done remotely, and a lot of things can be tracked remotely. The old way, where patients had to walk into a doctor’s office every three months to get refills, and so on, is probably going to change. And I think that’s going to be for the better.

Another change might be how we manage patients in the hospital. We’re going to need a larger outpatient or ambulatory surgery apparatus to augment any health care system. Right now, hospitals get paid more to do the same procedures in-house than a doctor would in private practice. If we incentivize things properly, more patients can be kept outside the hospital, where they’re more likely to get an infection.

We’d like to think everything needs to have the most cutting-edge technology, but if we focus on what’s basic — caring for human beings — then I think that’s where the value of medicine will always lie.

With the decrease in elective surgery, we’ve seen how much hospitals depend on it as a form of revenue. Coupled with the rise in ambulatory surgery and outpatient care, hospitals may, paradoxically, get smaller — they’ll mainly have a large ICU unit as well as a much larger bunker for telehealth or remote care for patients. Large hospitals with 400-500 beds and a 30-bed ICU may now shift to having larger ICU and intermediate care units while cutting down the number of patients who are in the hospital.

What I’ve noticed is that a lot of care comes down to the basics of medicine. We’d like to think everything needs to have the most cutting-edge technology, but if we focus on what’s basic — caring for human beings — then I think that’s where the value of medicine will always lie.

Georgia attracted heated criticism when it eased its lockdown in late April, as many felt that this decision was premature. What were your thoughts about this?

It is easy to play armchair epidemiologist, so it's important to acknowledge it was a difficult decision to ease the lockdown. The other side of this humanitarian tragedy is the economic impact of remaining in lockdown. Every percentage point increase in the unemployment rate increases mortality rates. The honest answer is that we will probably never know the best way of opening up — but will likely have a good idea of what went right or wrong down the road. We had to make a decision based on the information available and hope for the best. Experts will have their opinions, biases, and political inclinations. Results and outcomes speak for themselves.

Have you felt that your own personal health was at risk when treating COVID-19? What was it like going to work knowing about the possibility that you and your colleagues risked infection?

I did not think much about my risk. Doctors are always at some risk of contracting a disease. However, that changed when I was exposed to a COVID-19-positive patient without my personal protective equipment for a considerable period of time and in close proximity. I questioned my "recklessness" in examining the patient (who did not exhibit any COVID-19 symptoms) and my ability to infect my family and other patients. I felt guilty and foolish for putting myself and my family in such a position. It was not a good day. One of my colleagues had even written a living will, just in case.

When you look back on this period decades from now, what’s something you’ll always remember?

There are many, but I’ll tell you two. I treated a lady who was asthmatic. Her boyfriend had been exposed to a COVID-19 patient. She came into the hospital, on the general floor. At first, she wasn’t so sick — she was comfortable — but then she began to feel much worse. I was called into the ICU at two in the morning to see her. She was in distress, rapidly declining. I was going to intubate her.

I felt so grateful that I could give her the time to talk to her daughter because I knew what direction she was going in. I wish I could give more patients the ability to do that.

I’d heard on social media — and for this, I’m grateful for Twitter — how other physicians were using FaceTime for patients to speak to their loved ones. We were so uncertain about the trajectory of the disease, and patients on ventilators had such poor outcomes, that people often didn't get a chance to say goodbye to their loved ones before they died. This woman had a cellphone that she gripped in her hand. I encouraged her to call her daughter, even though she was short of breath. And she was able to say things to her daughter that she’d always wanted to.

Thankfully, the story has a happy ending: Even though we put her on the ventilator, she recovered and is now doing well. I felt so grateful that I could give her the time to talk to her daughter because I knew what direction she was going in. I wish I could give more patients the ability to do that.

The second story is more tragic. I met a woman in her 40s who had lost her father two weeks prior to COVID-19 in my hospital’s ICU. Two weeks later, her mother was there on a ventilator and not doing well. We’d implemented some strict visiting rules, but it was confusing because they were changing on a day-to-day basis as more information was being gathered. Rules sometimes lag behind data. We were realizing that these rules prohibiting visitation were very restrictive and inconsiderate of the human soul.

The woman on the ventilator wasn’t doing well. I came by and realized that I couldn’t predict what would happen in the next couple of hours, much less whether she’d survive the day. Despite the rules, I felt very strongly that the woman’s daughter, who had already lost her father, should at least be called and given the option to visit. We were able to get her permission to come. And her mom died within half an hour after her daughter’s arrival.

For me, to see the woman at her mother’s bedside, even though it was a poor outcome — it would have been a lot worse if we had just followed the “no visitors allowed” rule. We’re glad that we were able to bring her daughter to her bedside. So these are the images that will stick with me.