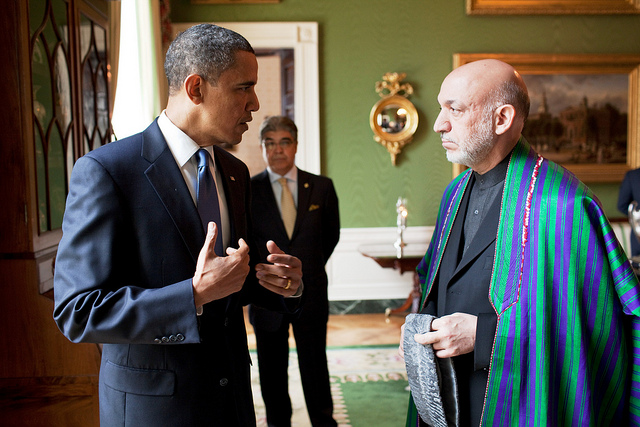 President Barack Obama converses with President Hamid Karzai of Afghanistan at the White House in Washington, D.C., on May 12, 2010. (U.S. Department of State/Flickr)

Critics have attacked the Obama administration’s announcement of a 2014 combat troop withdrawal from Afghanistan for giving too much warning to America’s enemies. Yet the defined timeline for transition sets the frame for a revised U.S. focus on a greater prize — Asia.

With the end of the Afghanistan conflict, the Obama administration has a window of opportunity not seen since the end of the Cold War to refocus its strategy in India, Pakistan, Afghanistan, and the other countries of South Asia. A failure to take advantage of this moment risks the second Obama administration being trapped in the policy priorities of the past, and risks the U.S. losing vital influence in an increasingly important region.

With an eye toward making pragmatic suggestions to U.S. foreign policymakers, the Asia Society has interviewed over 90 current and former officials who have dealt with U.S. South Asia policy for a report titled The United States and South Asia After Afghanistan. We have looked back to look forward, reaching out to officials from every Administration since Kennedy. The key historical finding: that long-term strategy has rarely been implemented towards this crucial region.

There is no better time for the U.S. to focus on a holistic Asia strategy than 2013. Finally, South Asia matters enough to Washington to merit sustained policy attention. No longer is it the “back side of the State Department globe” as former Under Secretary of State for Political Affairs Tom Pickering once famously called it. And for the first time in more than a decade, no single policy priority sucks up all the air in the room.

Afghanistan will continue to be important even as it moves to transition. The U.S.-India relationship is intimate, mature, and moving forward. Counterterrorism remains important, but Osama bin Laden’s death, along with those of many of his lieutenants, means that the campaign against terrorists is no longer a super-priority. At least for now, the U.S.-Pakistan relationship is out of the headlines and being worked on.

To take advantage of this moment the State Department should look to more fully integrate South Asia into an Asia strategy. Many, if not all, challenges in the region cross the traditional South and East Asia divide. Asian states see Asia as a geopolitical and economic space. U.S. policymakers on South Asia need to do likewise by breaking down the State Department’s bureaucratic boundaries. Imaginative assistant secretaries like Kurt Campbell have already begun to do this work by creating a front-office regional strategy team for East Asia that provides policy advice directly to the assistant secretary.

This movement can be continued by cross-posting East Asia and South Asia Foreign Service officials and by establishing stronger mechanisms for cross-bureau Asia policy. Career incentives should be introduced to encourage diplomats to serve in China and South Asian states, and progress should be made on the positive work already underway that sees the assistant secretary for South and Central Asia lead talks in Beijing and the assistant secretary for East Asia and the Pacific lead talks in New Delhi.

Finally, the State Department should look to establish a formal “South Asia cadre” of Foreign Service officers. The historic challenge to policy towards this region has not been a lack of expertise. Although the policy bench was sometimes thin, a larger challenge was that South Asia work was not highly valued within the Foreign Service. Establishing a formal South Asia cadre in the Foreign Service in which officers can formally declare a career interest in the region would provide the South Asia policy leads in the State Department with a defined community of officers.

As one former assistant secretary of state for South Asia told me in a recent interview, “there wasn’t a lot of attention given to a broad South Asia strategy” in the 1990s. A former U.S. ambassador to Pakistan, meanwhile, argued there was “close to zero long range planning on Pakistan.” This needs to change. The second Obama administration should take the opportunity not just to stock-take the U.S.-South Asia relationship, but to set out a long-range political vision of how the U.S. relationship with the region should evolve.