Obama, Climate Change, and the China G-20 Summit: An Explainer 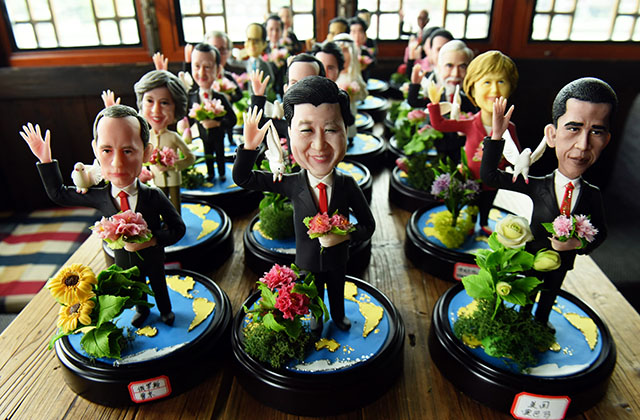 This weekend will kick off the G-20 Summit in Hangzhou, China, where the top leaders of 20 major economies will meet to discuss some of the most pressing international issues. Climate change is expected to be one of the top agenda items, with many eyes on U.S. President Barack Obama and Chinese President Xi Jinping, who are expected to have their own bilateral meeting that will include discussion of the subject. In an interview with Asia Blog, Asia Society Policy Institute Director of Asian Sustainability Jackson Ewing describes the backdrop of U.S.-China cooperation on climate change, what Obama hopes to accomplish, and what a successful G-20 summit would look like from a climate perspective.

Obama made stops for climate-related events in Lake Tahoe, Hawaii, and Midway Atoll on his way to China for the G-20. What’s the significance of that?

The Asia Society Policy Institute (ASPI) works with policymakers, scientists, economists, business leaders, and experts from other fields to assess the challenges associated with securing food, water, and energy for Asia’s burgeoning population in a way that conserves environmental resources for the future. Learn more about ASPI's sustainability initiatives.Learn more

Obama’s so-called "conservation tour" is an effort to advance his climate change and environmental policy agendas in these late days of his presidency. When campaigning in 2008, then-candidate Obama pledged to reduce climate-altering carbon dioxide emissions by 80 percent by 2050 and invest $150 billion in new energy-saving technologies. Congress rejected President Obama’s climate legislation during his first term and has been largely adversarial on climate change since. As his administration began to sunset, Obama skirted difficult legislative processes in favor of regulations such as the Clean Power Plan (CPP), and entering international climate partnerships, such as that with China.

His remarks on this trip are weaving together climate change with more classic environmental themes on stewardship for our natural surroundings. Climate change progresses fairly slowly, stems from invisible and odorless gasses, and has effects that are often not immediately apparent. This makes messaging the climate challenge difficult, and by tying it to local conditions in places like Lake Tahoe and Hawaii, Obama is seeking to lend climate change some tangibility and urgency.

There have been reports that China and the U.S. may formally join the Paris climate pact at or ahead of the G-20 summit. What does that mean? And what’s the significance of the U.S. and China joining together?

Ratification looks like it may well happen, and it would be a big deal. China and the U.S. are responsible for almost 40 percent of the greenhouse gasses driving climate change, so any international agreement depends on their participation.

Their budding climate partnership has surprised many and has been marked by the joint announcement of several major climate response commitments. In 2014, they together presented specific targets for reducing emissions over coming decades, in 2015 they came together to forge city-to-city and state-to-province partnerships, and in March of this year Presidents Obama and Xi co-announced their plans to sign the Paris Agreement (a step on the path to officially joining).

This strengthening partnership is revitalizing optimism in climate circles, and changing the tenor of international dialogues and negotiations.

What’s behind the U.S. and China climate change cooperation?

I see factors in China, the U.S., and internationally all coming together to makes this partnership possible.

In China, economic growth is slowing and the country’s goals are changing. The Chinese economy from the late 1970s through the 2010s was defined by double-digit growth, investment in heavy industry, dependence on physical exports, and low wage costs. This led to impressive economic expansion and poverty eradication, but also brought massive fossil fuel consumption, severe pollution, growing wealth divides, and overproduction in industries like steel, cement, and construction. China’s new growth model seeks to advance high-tech services and innovation, reduce inequality, and promote environmental sustainability. Fossil fuel consumption is slowing, energy is being used more efficiently, and the dominance of manufacturing is shrinking as a result — each of which creates space for China’s more ambitious climate change agenda.

In Washington, the Obama administration is keen to engage China on an issue where they can now find common ground. U.S. leaders view climate change cooperation as an oasis in a relationship otherwise brimming with strategic tension and are pursuing and then publically trumpeting bilateral agreements as a result.

Global trends also favor greater climate cooperation between China and the U.S. — which both resist being constricted by international regimes. New international approaches call on countries to publicly report their own voluntary climate goals and pathways for achieving them. U.N. bodies and other institutions provide support and reporting guidelines for reaching these goals, and countries in a position to do so offer funding and resources. This flexible structure is welcome in Beijing and Washington and has helped reduce friction in climate forums between developed and developing world camps.

What are remaining points of contention between the U.S. and China on climate?

The developed-developing world friction I just mentioned may be waning but it hasn’t disappeared. For decades, recriminations between China and the U.S. hamstrung global climate change efforts. China clung to its status as a developing country with little culpability for the climate problem, with other more pressing problems like poverty alleviation to worry about first. Like other developing countries, China argued that it has the right to industrialize as western countries did in the past, and if the international community expected it to do so without high greenhouse gas emissions, then it needed to provide support and resources to make that possible. The U.S. responded by justifying its own relative inaction through accusations of Chinese intransigence, claiming that climate agreements without strong commitments from China would not be effective and were essentially pointless.

While these traditional sticking points aren’t as hard and fast as they used to be, China and the U.S. are still in the early days of their climate change partnership and are not completely aligned on several key issues. They remain at odds on how emissions reductions are monitored, reported, and verified, where international resources should come from, and how they should be deployed, and how intellectual property rights should be handled in the transfer of renewable technologies.

From a climate perspective, what would a successful G-20 summit look like? Is anything substantial likely to change?

My hope is that China and the U.S. follow through with plans to ratify the Paris Agreement and a large selection of other G-20 countries follow their lead.

The G-20 will not produce new agreements on climate change. That’s not its role. It instead provides a platform for the world’s largest economies to affirm the importance of meeting the climate change challenge. This is important; particularly when you consider that collectively the G-20 accounts from more than three-quarters of all climate change causing emissions. The G-20 can send signals to governments, business communities, and civil society organizations around the world that climate change is high on the agendas of these powerful countries.

The G-20 also offers a venue for seeding climate change solutions, forging partnerships, and making deals. G-20 meetings last year in Turkey saw agreements reached on solar power investments for example, and this year G-20 countries are likely to discuss phasing out fossil fuel subsidies. Because it encompasses such a large portion of the global economy, and yet is not as unwieldy as forums made up of all the countries of the United Nations, the G-20 offers a real opportunity for climate change progress.