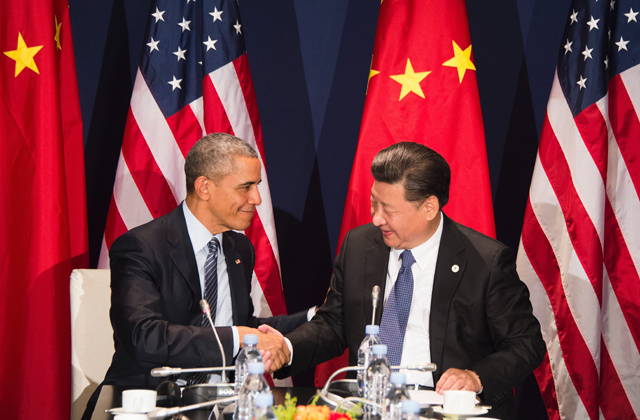 U.S. President Barack Obama (L) shakes hands with Chinese President Xi Jinping during a bilateral meeting ahead of the opening of the UN conference on climate change COP21 on November 30, 2015. (Jim Watson/AFP/Getty Images)

At a time when complex strategic challenges define much of their bilateral agenda, climate cooperation has become a vital aspect of the Sino-American relationship. This trend, which reverses longstanding friction between the two countries on the issue, is not just important for China and the U.S. It has also energized the global fight against climate change.

The relatively rapid progress is remarkable, considering China and the United States have been at odds on climate change for most of the past two decades. Beijing has consistently emphasized its continuing economic development needs, and relative lack of historical responsibility for the problem. The U.S., meanwhile, has argued that given China’s current and projected profile, climate change efforts that do not include China reducing its emissions in an internationally verifiable way are pointless. The result was mutual scapegoating that has hamstrung global climate negotiations for most of the past 15 years.

This is no longer the case.

Since 2014, China has committed to reduce carbon intensity, peak its carbon emissions, set up a national carbon market, and introduce low-carbon energy infrastructure on an unprecedented scale. For its part, the United States is moving from strong reticence toward emissions reduction commitments to putting forward ambitious quantitative targets. Through new regulations, Washington is now headed toward a possible lower-carbon future that was difficult to foresee in the very recent past.

As unanticipated as these shifts are for either country, it is equally surprising that they are pursuing them in concert — releasing a raft of bilateral agreements detailing everything from emissions targets to research cooperation and city-to-city environmental and energy exchanges.
These shifts are best explained by transformative changes occurring within both countries.

China is undergoing an economic transformation toward slower, more high-quality growth, and has placed new primacy on environmental health, income equality, and quality-of-life improvements. Air pollution and other areas of environmental decline are driving this transformation, which enjoys strong government support and is changing the energy and environmental landscape throughout the country.

Between 2010 and 2014, non-fossil energy generation capacity increased some 73 percent, and in 2014 alone China added roughly 22 gigawatts (GW) of hydroelectric capacity, more than 5GW of nuclear, 21GW of wind, and 11GW of solar energy. This move toward renewables not only seeks to redress pollution problems but also reflects China’s move away from heavy industry to the higher-tech, higher-value segments of the global economy.

In the United States, the Obama administration is seeking to implement the president’s progressive environmental agenda before he leaves office. President Obama campaigned in 2008 to reduce carbon dioxide emissions by 80 percent by 2050 and invest $150 billion in new energy-saving technologies. Upon taking office the following year, Obama addressed climate change by stating that “delay is no longer an option. Denial is no longer an acceptable response.”

After meeting with steady Congressional resistance, the Obama administration has sought to regulate its way to achieving these environmental goals. Obama’s Clean Power Plan establishes state-by-state targets for carbon emissions reductions, and seeks to reduce national electricity sector emissions by an estimated 32 percent below 2005 levels by 2030. The administration is empowering the U.S. Environmental Protection Agency to strongly regulate coal emissions, and the White House is robustly supporting clean energy investment and capacity gains.

These shifts in China and the U.S. have created the space for the two countries to scale-up their climate change cooperation, which a recent joint presidential statement called “a pillar of the U.S.-China bilateral relationship.”

The countries have also been emboldened by the more flexible international approaches to climate change diplomacy that defined last year’s landmark Paris Agreement. The current global climate regime’s emphasis on nationally-determined, nationally-appropriate climate response strategies plays to both countries’ preferences for international maneuverability. China and the United States bristled against the constrictive regimes proposed and enacted in the past, and nascent climate approaches defined by flexibility and national intentions are far more palatable in both Beijing and Washington.

Given that the U.S. and China are the largest greenhouse gas emitters globally, accounting for over 40 percent of the global total, this convergence is vital to global climate change progress. The U.S.-China partnership changed the tenor of the 2015 Paris climate summit, and raised the ceiling for the agreement reached. This partnership, difficult to envision only three years ago, is now fueling optimism about the future fight to prevent disastrous global climate change.