In Myanmar, a Former Hijacker Finds His Own 'Middle Path,' Without Regrets | Asia Society Skip to main content

In Myanmar, a Former Hijacker Finds His Own 'Middle Path,' Without Regrets 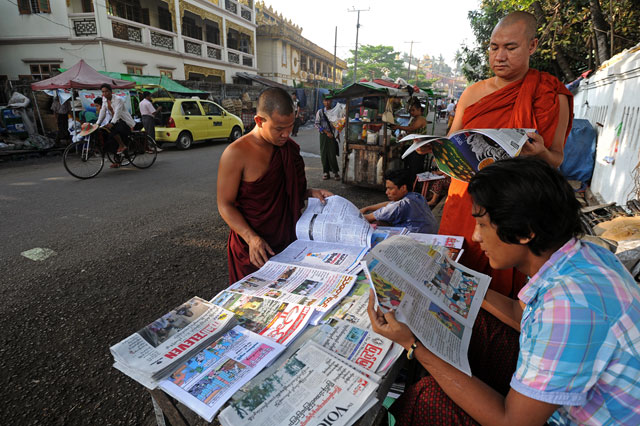 Buddhist monks read newspapers at a stall near the Shwedagon pagoda in Yangon on May 9, 2014. (Soe Than WIN/AFP/Getty Images)

Returning to Myanmar after a quarter century, one is confronted constantly by reminders of how much the country has changed. In 1989, when I last was here, a military junta ruled the nation; it had used force to crush a student protest, and was hounding the opposition figure Aung San Suu Kyi and her supporters (she was placed under house arrest two weeks after I left). Public gatherings of more than three people in the capital were banned, as was any criticism of the regime. As a result, Burma, as it was known then, lived in an almost North Korea-like state of isolation, a resource-rich nation turned global pariah, frozen in a sleepy and impoverished 1960s existence. It was like Cuba in this way; a warm and inviting place where signs of poverty and faded grandeur were everywhere.

Today Myanmar boasts a vibrant press, fancy new hotels, a crush of potential (and actual) foreign investors, and a freewheeling political system in which Suu Kyi herself is a critical player. The grandeur may still be distant, and the challenges many, but the country is coming out of its shell, and emerging slowly from a long nightmare of authoritarian rule.

I took note of such changes, walking from the Strand to the Sule Pagoda in Yangon and riding a gondola from Nyaung Shwe to a gorgeous resort on Inle Lake. But for a truly dizzying example of the country's turnaround, it was hard to beat the smiling, soft-spoken man I had tea with, one afternoon in Yangon's Chatrium Hotel. His name was Soe Myint, and he was the 46-year-old editor-in-chief in charge of Mizzima Media, one of the most respected and successful media properties in his country. When I was last in his country, Soe Myint was a 21-year-old student at Rangoon University. "If you had met me in that time," he said with a twinkle in his eye, "I would not have been able to tell you what I was planning in my mind. And if I did tell you, anyway you wouldn't have believed me."

In 1988, after the Burmese junta opened fire on student protestors, killing more than a thousand, Soe Myint and several dozen members of his Rangoon University class fled the capital and headed east for the jungle of the Thai-Burmese frontier. There they joined other young Burmese plotting resistance to the military regime, but he and his friends were quickly disillusioned. Ultimately, they crossed the border by boat — "It took two nights, and the boatman took no money from us" — and made their way to Bangkok.

Back home, the situation only worsened. After Suu Kyi's National League for Democracy (NLD) trounced the ruling party in elections, the junta simply ignored the vote and sharpened its clampdown. Thousands in the protest movement were jailed. Soe Myint and his university classmate Htin Kyaw Oo kept trying to raise awareness of the situation to provoke some international response, but they found little sympathy in Thailand, and by 1990 it seemed the world was mostly interested in outrages perpetrated by another autocrat — the Iraqi leader Saddam Hussein.

"No one at that time was paying attention to our struggle," Soe Myint said. He and Kyaw Oo grew increasingly frustrated and were increasingly convinced they needed to do something dramatic, to "do something for democracy and human rights."

Dissent can take all sorts of "dramatic" forms, of course. What Soe Myint and his friend came up with was this:

They would take a so-called "Laughing Buddha" statue (for "good luck," Soe Myint thought) and wrap it many times over in tissue paper. They would buy tickets for the short Thai Airways flight from Bangkok to Rangoon. And then they would storm the cockpit, tell the pilot the Buddha was in fact a bomb, and demand to be flown to Calcutta. India, they knew, was a supporter of the Burmese opposition.

They would tell no one in Bangkok or Rangoon, not even their families and friends. They did not wish to harm anyone. But they were prepared to die for their cause.

It was November 1990, more than a decade before the September 11 hijackings, and Soe Myint had no difficulty bringing his tightly-wrapped Buddha aboard. In any event, it wasn't a weapon; only dressed and covered to appear like one. The flight was a short one, Thai Airways' regular one-hour, 15-minute hop from Bangkok, with 220 on board. As soon as the jet had reached its cruising altitude, the young men made their move.

Somehow the door Soe Myint “stormed” brought him not to the cockpit but to a bathroom. Moments later he and Htin Kyaw Oo were face to face with the flight crew, brandishing their “weapon.” Soe Myint did the talking, explaining that they were acting on behalf of the repressed people of Burma, that they meant no harm, but were demanding to be taken to Calcutta. Once there, they would demand the release of Suu Kyi and other prisoners, and the end of martial law and military tribunals.

The Thai crew complied. The two men were jailed on landing at Calcutta, their Buddha unwrapped and confiscated. But as Soe Myint had known, the Indian government was sympathetic to the Burmese opposition, and the nation proved sympathetic to the two student hijackers. They passed the next several months in a Calcutta jail, but they were treated well. No passengers filed complaints; neither did Thai Airways. Soe Myint and Htin Kyaw Oo won formal support from the UN High Commissioner for Refugees and other international organizations, as well as more than 30 members of the Indian Parliament. They were released to a center for refugees in Delhi.

“I soon realized,” said Soe Myint, “that we had been very, very lucky.”

The men continued their dissent from inside India. In 1998, Soe Myint founded Mizzima Media – using the Pali word for “middle path” — a kind of Burmese news-agency-in-exile. Mizzima won funding from the Open Society Institute and the National Endowment for Democracy, among others. But a few years later, a full 12 years after the hijacking, Soe Myint’s already-improbable story took another bizarre turn.

In April 2002 police stormed Soe Myint's home and charged him under India’s Anti-Hijacking Act. A new Indian government had turned favorably towards the Burmese junta; in fact, the External Affairs Minister Jaswant Singh had traveled to Rangoon just that week. And of course, the September 11, 2001 attacks had happened; now a student hijacker, however noble his cause or non-violent in practice, looked more menacing. By now Htin Kyaw Oo was living in Ireland, where he had been granted asylum; but Soe Myint was hauled to court, facing the possibility of life in prison if convicted.

At trial, Soe Myint stuck to his story. He had carried no weapon; he had never intended to hurt anyone, nor had anyone actually been hurt; it had been done for a noble, if desperate cause. 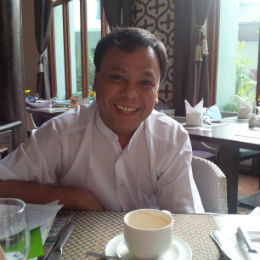 In April, 2003, he was acquitted. “I am today a free man,” he told reporters following the verdict. “But 50 million Burmese are still prisoners in Burma, under the military regime.”

A decade later, Soe Myint returned home, to his newly-democratic country. Mizzima Media is today a flourishing media property, and in another sign of the changes, its partners include business figures who were once close to the military regime. Today the press in Myanmar is a wide-open, free-wheeling institution — though it still comes in for occasional crackdowns from the government. Soe Myint himself, sipping tea in the Yangon hotel, smiles when asked about what he and his friend did on that airplane, all those years ago.

“I am sorry for pain I caused my family,” he says. His mother was jailed when the authorities raided his home soon after the hijacking. But he says his parents forgave him long ago, and that beyond that, he has no regrets.

Would he do it again? Another smile. “Today I think I would try something different,” Soe Myint said. “Today, maybe no Buddha. No hijack.”