From Jaipur to Kolkata to Tamil Nadu, Freedom of Expression Issues Roil India 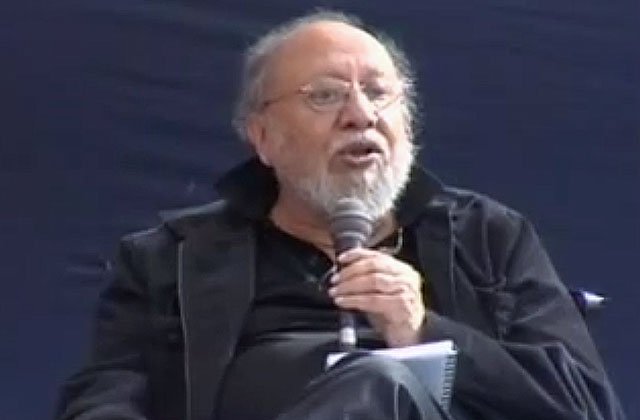 The annual DSC Jaipur Literature Festival is one of the largest gathering of writers and thinkers in the Asia-Pacific region, attended by tens of thousands of visitors from around the world. At this year's festival, held in Rajasthan from January 23-28, Indian sociologist Ashis Nandy caused a stir on the January 26 panel "Republic of Ideas," where he appeared alongside Patrick French, Ashutosh, Tarun J. Tejpal and Richard Sorabji.

In response to Tehelka editor Tejpal's comments that corruption serves as a class equalizer in India, Nandy added (at approximately 40:40 in the video embedded below) what he acknowledged as an "undignified" and "almost vulgar statement" on his part. He said, "It is a fact that most of the corrupt come from the OBCs [Other Backward Classes] and the Scheduled Castes and now increasingly the Scheduled Tribes, and as long as this is the case Indian republic will survive."

Nandy, who considers himself a psychologist to the country, ended the panel discussion by explaining his comment on the the republic's health being dependent on the number of people getting caught for corruption being higher among the poor and oppressed classes. He reminded the audience of his earlier analysis of how the rich get away with their corruption, whereas corruption among the backward classes is more conspicuous.

Seen to be anti-Dalit, the comment drew the immediate ire of Nandy's fellow panelist Ashutosh (at 41:50, below). Since then, small demonstrations have been staged against Nandy — and the Chairperson of the Scheduled Castes/Scheduled Tribes Rajasthan Manch, Rajpal Meena, filed a police report against Nandy and festival organizer Sanjoy Roy. On the other hand, writing for the New York Times, journalist Manu Joseph defended Nandy by saying, "India is a paradise for those who take offense because the first reaction of the state is to appease those who claim to have been offended."

Controversy at the DSC Jaipur Literature Festival isn't new. Last year, renowned author and perennial lightning rod Salman Rushdie pulled out of the festival at the last minute after protests and death threats in the wake of some Muslim groups' call for the author of The Satanic Verses to be banned from attending. Although he was in Delhi at the same time as the Festival this year — on a tour to promote the film adaptation of his novel Midnight's Children, along with its director, Deepa Mehta — Rushdie didn't attend the DSC Jaipur Literature Festival. Nevertheless, he was effectively censored again this year as his promotional events in Calcutta had to be canceled due to security threats. Mehta also refrained from appearing at the Kolkata Literary Meet, where she was scheduled to speak about the film.

Freedom of speech and artistic expression seem to be a hot topic in India these days. Last week the state of Tamil Nadu suspended the release of a new film, Vishwaroopam, directed by and starring Kamal Haasan. The thriller, which has been produced in Tamil, Telugu and Hindi versions, was banned by the state government after 20 Muslim groups objected to its content. The Madras High Court ordered the state to lift the ban but the Court's orders were overturned by the government's appeal. Haasan stated publicly that he doesn't believe his film is "anti-Indian Muslim" and agreed to edit out the scenes that Muslim groups had found offensive — but at the same time he announced his intention of exiling himself to a more "secular" home, either elsewhere in India or abroad.

The suspension of the film in Tamil Nadu has given rise to a debate on freedom of expression in India, with members of the film community actively supporting Haasan and his work on social media. Prominent actors like Anupam Kher tweeted that as a former Censor Board Chief he strongly condemns the banning of Vishwaroopam. "We as People of India are Shamelessly SPINELESS," he added. Actress Shabana Azmi tweeted that "the purpose of Art is not only to placate and please. It is also to provoke, stimulate and initiate discussion."