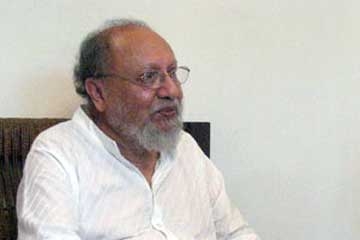 This is the latest installment of a series of podcasts entitled Another Pakistan, a co-production of the Asia Society and the Watson Institute at Brown University, with support on the ground from Aman ki Asha and Zarminae Ansari. Click here to learn more. Scroll to the end of this post to listen to the podcast.

NEW DELHI — Ashis Nandy, our sparkling Sage of New Delhi, is in effect a psycho-analyst of post-colonial South Asia. On the way home from Lahore, we stopped to ask the great man about Pakistan — and the "myth of Pakistan" which, he has written, "originates in India and dominates India's public life," too. "Pakistan is what India does not want to be… both a double and the final rejected self… the ultimate symbol of irrationality and fanaticism."

Such is the myth. The reality and the possibility of Pakistan, and Nandy's feeling about India's neighbor, come out very differently in conversation. "I feel at home in Pakistan," said the poster version of the Bengali intellectual. "I miss only the vibrancy, the stridency of the political opinions that are articulated against fundamentalism and the state." Pakistan is "a troubled country," he is saying, "but not moribund, not a failed state," and not about to become one.

I have seen other faces of Pakistan too, other faces of the Pashtuns who have supplied us with the Taliban and hosted Osama Bin Laden. Gandhi called them the finest non-violent freedom fighters of India. Not once, more than once. So there is another story, which is no longer told, which seems very old-fashioned, which doesn't seem to have a place in contemporary statecraft and contemporary political culture. I find that very odd. Human potentialities are not adequately recognized. I think we live with stereotypes, and once a stereotype becomes unfashionable, then pick up another stereotype. But there is another way of looking at it: the potentialities that are inherent in some of the cultures in this part of the world have never been fully explored. People are afraid of them, they become so nervous about the darker side of human nature that they do not like to know of them; they think this would be a compromise with realism, a compromise with statecraft. …

What we saw during the Partition was ultimately not only the pathology of rural India and urban India, but also the forces that can be mobilized for a different kind of effort, to fight the violence… I think my study of partition violence has made me more respectful towards ordinary Indians and Pakistanis, and I would in the future be more open to the multilayered selves of people in this part of the world, perhaps people everywhere.