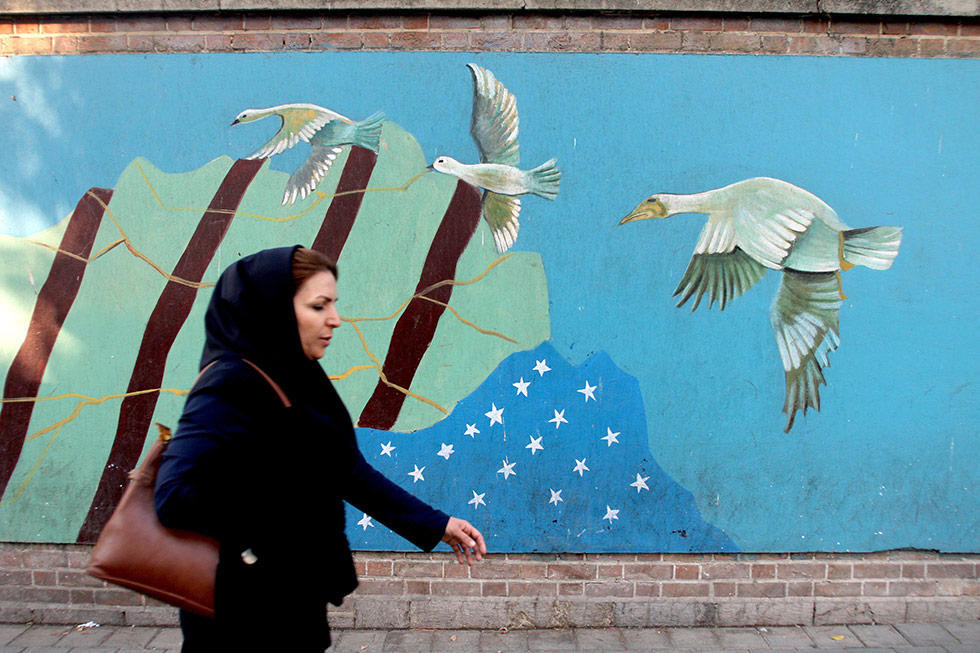 An Iranian woman walks past a mural on the wall of the former U.S. embassy in the Iranian capital Tehran on November 9, 2016. (Atta Kenare/AFP/Getty Images)

U.S. President Barack Obama has said that he considers the Iran nuclear deal one of his administration’s greatest foreign policy achievements. The deal, which was negotiated between Iran and the P5 + 1 (the five permanent members of the United Nations Security Council and Germany), went in effect early this year, and lifts economic sanctions against Iran in exchange for Iran abandoning its nuclear build-up. But since the election of Donald Trump, the future of the deal has looked shaky, as both Trump and members of his transition team have repeatedly criticised it in the past, and threatened to pull out of it.

On November 16, 2016, Asia Society Switzerland discussed the future of the deal — and the future of Iran — with Philippe Welti, former Swiss ambassador to Iran, and Ali Vaez, senior Iran analyst at the Crisis Group in Washington, D.C. Just before the event, we sat down with Ali to ask him some additional questions.

What will the Trump administration’s Iran agenda be? Will they try to kill the nuclear deal?

I don’t think that the Trump administration knows what its Iran agenda is going to be. They are probably still at the stage where they are trying to decide on their priorities. But I’m worried by the general attitude of the people in the Trump transition team, who are for the most part highly skeptical of this agreement and hostile towards Iran. And that is a source of concern because even if they don’t scrap the agreement, the deal cannot be put on autopilot and survive. By nature, it requires a lot of affirmative action to upkeep it.

But I hope that the Trump administration realizes it has enough problems on its hands, and doesn’t want to reopen an issue that — after the expenditure of much time, energy and diplomatic capital — has been resolved. The deal is actually working, and has at least removed one source of tension in a region that is already in turmoil. So a Trump administration should be as committed to the deal as the Obama administration is, and try to figure out ways of working with Iran.

Watch: A discussion between experts, including Asia Society Policy Institute's Kevin Rudd, on the Iran nuclear deal and what it means for U.S.-Iran relations and the future of regional stability. Learn more

The election in the U.S. has also been closely followed in Iran itself. Who in Iran is happy, and who is concerned about Trump in the White House?

Some people in Iran prefer a U.S. president who lacks nuance and gives credence to their anti-American sentiments. For them, it’s much easier to point the finger at an administration that is widely seen as unreasonable, and to shift the blame to them. This is mostly the attitude of the hardliners, although I’ve heard it from pragmatists as well. Others are quite concerned about what the Trump administration is going to do, but still hope that, because it is a multilateral agreement, Iran is not going to be as isolated and cornered as before the deal, because the other signatory states will stand by it no matter what. I think it’s a bit naive to believe that if the Trump administration really wants to undermine the deal, it will do it in such a brazen way that the blame would clearly fall on the U.S.

Iranian President Rouhani promised that the deal would lead to economic growth. And while that has happened, it has been pretty limited so far. Why is that?

I think there were unreasonably high expectations in Iran about what the nuclear deal could deliver. People thought it would improve Iran’s economic wellbeing overnight. This was partially because the Iranian government wanted to build support for the deal, but also because of the international attention and the sense that Iran was a growing economy, and reconnecting it to the global economy would create big dividends.

But it’s important to understand that the agreement was never about trade and investment. It never promised Iran a certain degree of economic growth. It promised to lift the sanctions, and it did. And Iran has already been able to reap some of the benefits, though admittedly they are lower than what Iranians expected.

If the deal collapses, what are going to be the global consequences? How will the world change?

It would set a very negative precedent. It would send a strong signal that multilateralism doesn’t mean much. And it could put the non-proliferation regime at extreme risk. I can well imagine that in case of an escalation, Iran would pull out of the deal and even more towards developing nuclear weapons as the ultimate deterrent. Finally, increasing tensions between Iran and the U.S. would have adverse effects on the regional level, and lead the two sides to retaliate towards each other in Syria or Iraq and else where. That would deepen those crises and make their resolutions even less likely.