Interview: Punk Music and Protest in China and Russia 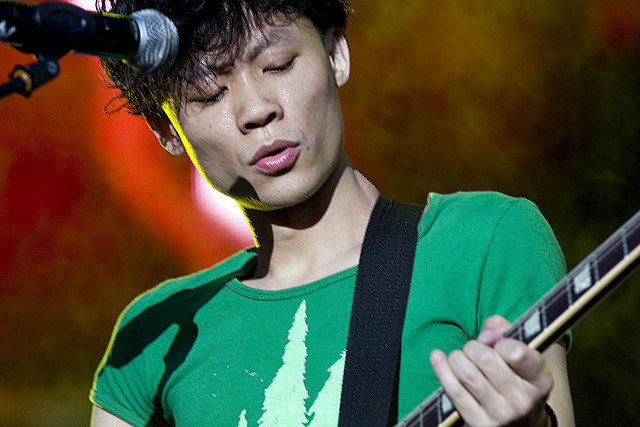 Fascinating things happen, the Pussy Riot trial reminds us, when music is used to give the finger to a stagnant government — especially an authoritarian one. In light of this, and the recent uptick in works (such as Slate editor William J. Dobson’s The Dictator’s Learning Curve) arguing convincingly that the 2012 incarnations of still-Communist China and post-Communist Russia have more in common than anyone imagined, I was interested in learning more about possible parallels between the Pussy Riot phenomenon and Chinese punks, rebels, and rockers. So I shot off an email full of questions to Jonathan Campbell. Why turn to him? Because he spent 10 years living among, writing about, promoting, and playing the music of rockers in Beijing and is the author of Red Rock: The Long, Strange March of Chinese Rock & Roll (see Ali Pechman’s review here and Dan Washburn's interview here). He answered me at length, and what follows is an excerpt from a longer version of the interview that ran at the Los Angeles Review of Books.

When contemporary China analogies have been brought up in coverage of the Pussy Riot trial, commentators have tended to veer away from music. For example, some have compared Pussy Riot's in-your-face form of dissent to that of Ai Weiwei and noted that, again, an authoritarian state's repressive moves have increased the global fame of the person or people being punished. There have also been some references to Pussy Riot's "show trial" taking place at the same time as that of Gu Kailai, a very different figure, of course, accused of a very different crime. Is there any parallel related to censorship and dissent, and contemporary Chinese music, that comes to mind for you? Or, if not, any thoughts on the Ai Weiwei analogy?

I think that what unites Ai Weiwei, Pussy Riot, and some of China’s most interesting and noteworthy rockers is that socialist legacy of the responsibility of artists to be examples to society, to use their art to make a difference. Looking at the closing statements of Nadezhda Tolokonnikova, it’s clear that this is not just about punk rock.

Are there ways, though, that you think the Ai Weiwei analogy doesn't work?

The main point at which the Ai Weiwei analogy fails for me is that he became a big international deal for his work, and, perhaps more so, for speaking out, rather than for being suppressed — that unlike Pussy Riot, who were not well known prior to this incident, Ai already had a degree of fame, though I would agree that his arrest and various punishments certainly increased that.

Also, I think that in the Chinese context, the reaction to dissent, musical or otherwise, is far more insidious than in Pussy Riot's case. In Russia, the trio has been charged with a crime and put on trial; the line they crossed is pretty clear. In China, however, that line is never clear. There's the old Sinologist saw about the anaconda in the chandelier that's apt: the dinner party goes on below, each guest fully aware of what’s coiled up above, and not 100 percent sure of what might cause an attack — though sure of the general sorts of things that might make the snake emerge. ...

Focusing on punk, when did it first make an impact on the Chinese music scene?

After Kurt Cobain died, punk, via grunge, started to seep more widespread through the Chinese underground. In 1996, a book on Cobain galvanized a lot of kids across the country. The real "explosion" happened in Beijing starting in 1996 and ‘97 and was aided by foreign residents with hardcore punk tape collections (like David O'Dell, who just wrote a memoir from that period). Within a couple years, crowds at punk gigs were equally split between fans there to see the show and journalists eager to tell the world about the Chinese punk scene. The first posse of bands was the Boredom Brigade (Wuliao Jundui): their two-disc release from 1999 provides a great window into that era.

What stands out to you as significant about Chinese punk groups?

One of the things that's interesting to me is how many of these bands are dealing with an intense patriotism alongside their beliefs. They know there are problems, but they believe, deeply, that there are domestic solutions and strategies. And they also believe that they are critical — if they are perceived as such — because of their love of their country and their desire to make it a better place. ...

To read the rest of the Q & A  — in which Campbell expands on the anaconda in the chandelier analogy, which was first proposed by Perry Link in a New York Review of Books essay (that can be accessed through the Asia Society's ChinaFile site) and discusses the roll of rock in the 1989 protests, — head to the Los Angeles Review of Books site. And here are two additional recommended readings on themes Campbell raised in the interview: for a smart and lively look at how music and protest became entangled in China in 1989, see Geremie Barme's "Beijing Days, Beijing Nights," and for some surprising connections between patriotism and both rock and classical music in China, see James Millward's "Shredding for the Motherland," a chapter in the forthcoming Chinese Characters: Profiles of Fast-Changing Lives in a Fast-Changing Land, a book that I co-edited and whose East Coast launch will be held at the Asia Society on September 17.