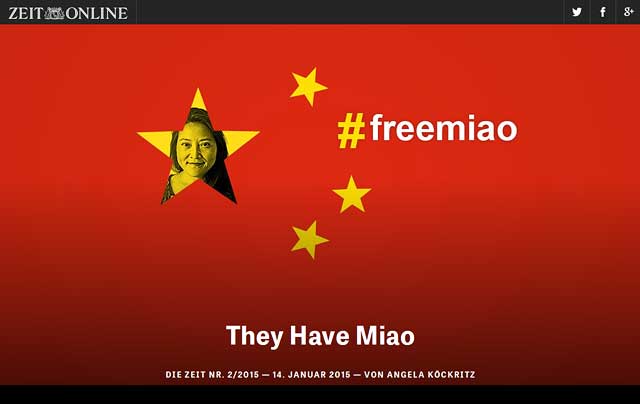 As Hong Kong’s Occupy Central protests for universal suffrage gained momentum last September, German Die Zeit journalist Angela Köckritz and her 40-year-old Chinese news assistant Zhang Miao flew in from Beijing to cover the movement. Getting swept up in the excitement, Zhang wore a yellow ribbon of support for the demonstrations and posted photos on Chinese social media. Upon her return to Beijing though, her excitement promptly ceased.

In a harrowing account published this week, Köckritz describes how Zhang was violently intercepted by police back in Beijing. Over the following days, Köckritz herself was interrogated by public security officials who accused her of conspiring with Zhang and other “agitators” to cause unrest in Hong Kong. She was also told that since Zhang was never registered as a news assistant, she was working illegally (something Köckritz admitted is true).

Zhang has remained imprisoned for the past three months on vague charges of “picking quarrels” and inciting public disturbance. According to her lawyer, she is suffering both physically and psychologically.

Jonathan Landreth, managing editor for ChinaFile at Asia Society, worked as an accredited foreign correspondent for The Hollywood Reporter and Agence-France Presse between 2005 and 2011. “Most foreign bureaus would be nothing without their Chinese news assistants,” Landreth said. He added that while harassment of news assistants has always been common, prolonged detentions like Zhang's have been extremely rare.

To get inside perspectives, we reached out to five Chinese news assistants for reactions to the Zhang Miao situation. Michael Zhao, now a multimedia producer in New York at the Center on U.S.-China Relations at Asia Society, served as a news assistant for the New York Times Beijing bureau from 2003 to 2005. The remaining four all spoke on the condition of anonymity to ensure their safety and standing with employers. News assistant #3 no longer works in media and now lives overseas. The rest are all active in China and have worked for various Western media outlets.

Can you describe what the job of news assistant is like?

News assistant #2: Overall, I think working for the foreign press makes me feel like a real journalist and I love every minute of it! I'm very lucky. However, being Chinese, one just has to accept that dealing with the authorities is part of your lifestyle. It's not just flying around the world to report news or enjoy a beach in Bali. There’s a dark side to it. But isn’t there with everything in the world? We need to know how to protect ourselves, and that might sometimes include fighting with our own organizations and correspondents. We also need to be realistic and responsible. Our job is to be journalists. We're not activists and we're not dissidents. We are journalists and we have principles and rules. It’s like surgeons who avoid becoming too involved with patients so that they can give the best care. We too always need to remind ourselves not to get too personal.

News assistant #3: Firstly, when there is trouble, there’s nobody that can really help you. After Zhang was arrested, her employer and the German embassy urged her release. However, since Zhang is a Chinese citizen living in China, her case is a “domestic affair” which foreign countries shouldn't and couldn't interfere with. Secondly, according to Chinese authorities’ rules, Chinese citizens are not allowed to be journalists in foreign media, but only allowed to play some supporting roles like translators, cameramen or secretaries. Therefore, career ceilings force many experienced people to leave. On the other hand, some media do add our names with something like “so-and-so contributed to this article” at the bottom, but in many cases we dare not even do that since we're not sure what it could mean for ourselves or our family. The worst that can happen to a foreign reporter who produces unpleasant stories in China is being expelled. But Chinese employees risk everything.

What did you think when you read the report about Zhang Miao’s arrest?

News assistant #1: Imagine African gazelles watching their mates cross a crocodile-invested river that they themselves had waded across just a short while ago. Imagine their horror when they look back as one of their mates first flounces and wails, then gets drowned and devoured. If those gazelles on the shore could speak up, their waterside distress and helplessness would be exactly my words about Ms. Zhang's plight, and that of many others. But if those surviving gazelles return next year to the same muddy water and seem blindly suicidal, it must be remembered that it's only their nature. What Ms. Zhang did is hardly any different.

News assistant #4: It sends a chill down my spine, of course. I compare Miao’s arrest to a terrorism strike, because it’s scary and meant to terrorize. I feel just like someone who witnessed the Boston marathon bombing — afraid at first, then outraged, then sad, then realize that if I panic, I lose. If you don’t panic, you see the big picture. We all know that the Party can grab anyone they want at any time. They’ve grabbed reporters, lawyers, students, accountants, scientists, teachers. Why not news assistants? I have friends who work for [state-owned] CCTV and worry about being grabbed. I know people who work for Sinopec and worry about being grabbed. NO ONE IS SAFE. It’s true that news assistants are forced to be close to politically sensitive activities, but other professionals are forced into other dangers. I know accountants and office clerks who are forced into paying bribes or falsifying books for their party chiefs. I know business owners are commonly forced into evading taxes just to survive. All of us can be grabbed at any moment. Maybe my job is 10 percent riskier, but at least I’m not forced into any illegal activities and I keep my integrity.

Michael Zhao: It was sad and frightening — definitely a lot worse than when I was an assistant. Generally the media environment in China now is not encouraging.

Does Zhang’s case make you afraid to work as a news assistant?

News assistant #3: Yes, it does. I am not a hero like Nelson Mandela or Dr. Martin Luther King. I can't sacrifice my life for what I believe. Therefore, I quit my job and went abroad.

News assistant #1: Please don't be cynical when I say my answer is an unequivocal NO. There is absolutely nothing scary about my job itself, period. But what the job incurs is another issue. It's inevitable that many assistants get jittery or even panic after nonstop government harassment. Fear is an all too natural reaction, there’s no shame in it. Yet my disposition tends to push such state-sanctioned wickedness below my lowest contempt so I can continue to approach life and work as they should be approached. Vocation is irrelevant in that every human being deserves an unperturbed and peaceful life, inside or outside China. Thus I think it would be more interesting to ask, “Does it make you afraid that you're Chinese?” My countrymen who have emigrated and pushed up property prices everywhere from London to Vancouver must have some lovely answers.

What is the general atmosphere for news assistants like these days compared to the past?

News assistant #1: This question sounds dangerously irrelevant to me. Generational changes might be of certain significance, but it's not like the regime woke up overnight and suddenly started arresting people. Harassment of the free press has never been dormant. The few cases that actually surface to public consciousness and ignite public debate do raise grave concerns, but what about all the routine intimidation day-in and day-out? It’s more covert, but is it any less vicious? Does a lack of drama make these incidents any less significant? The border between invisibility and forgetfulness is unabashedly porous. Many hear when there’s a scream in the night, but few are able to discern what it means when the darkness is simply silent.

News assistant #3: We are always like frightened birds, very careful of what we talk about online. I protect myself through self-censorship, which is very painful. I barely talk about politics on social media to avoid being targeted by secret police. I hope the next generation in China no longer lives in the fear that I have been through.

News assistant #4: The biggest impact since the new administration came to office is that there is no one left to call. Everyone we used to call up for a quote is in jail. The Party has long grabbed anyone with rebellious political views, and now it has finished grabbing the ones with modest views. Now it’s coming for anyone who speaks at all. No one wants to talk. It’s amazing how fast what little room we had to discuss public affairs just vanished.

What do you think of Angela Köckritz not officially registering Zhang Miao as a news assistant, saying it “would have meant more monitoring from the Ministry of State Security — and it’s also more expensive”?

News assistant #1: There is simply no stealth flight that can be safe and under the radar when it’s on a Beijing street. The sad and cruel reality is that, in a land where law-abiding citizens could be and have been wantonly thrown into custody, even the water-tight legality of a government-issued license is still just a weak protection. It nonetheless must be safely and firmly held in hand, no matter what. Contempt for bureaucracy only makes its snare easier. It's a reporter's imperative to have the assistant formally registered. An assistant should demand it up front as well. I prefer to believe that it was just unguarded carelessness in this case, but if monetary stinginess was somehow taken into the calculation of avoiding registration, I'm afraid no regrets can be sorrowful enough to ease the pain in event like Ms. Zhang's.

News assistant #2: I think Zeit is RUBBISH! I despise news companies that don't register their news assistants. They simply can't be bothered to make effort to try to protect their colleagues. To simply state the truth, they don’t treat Chinese news assistants as their colleagues but merely helpers or whatever. I am very lucky in this sense. Everybody is extremely cautious about my working conditions. There's absolutely NO EXCUSE not to register, apart from selfishness.

What’s the most frightening thing that ever happened to you in your capacity as a news assistant?

Michael Zhao: We once flew to Chongqing immediately after a gas explosion and then got sent back to Beijing the next morning by local police. But we were actually treated pretty nicely. There were no fights or anything.

News assistant #4: The time I interviewed a rape victim. Her whole family was threatened not to let her story be published. She cried and asked me what to do. It’s one of those situations where you never know if media attention could save her or destroy her. I was her point of contact. She asked me to keep her safe, but it was something I couldn’t promise. It was very painful.

News assistant #1: The dark humor of our trade likes to playfully scorn those who haven't yet been touched by trouble, as though they still have to prove their competence and seriousness as a news assistant by being worthy of an Orwellian audience. By that standard, I'm a crowned overachiever (in a humble and never proud way, it must be said for the record). If you have to know my worst nightmare, it wouldn't be the knock on the door, nor the lukewarm tea, nor being heckled as a traitor, nor the silvery handcuff in a black jail. It’s not even a sleepless overnight interrogation. It's after all that has receded, when one day the battery of your mobile phone dies out and you realize one hour too late how much your beloved have suffered because of that 60 minutes.