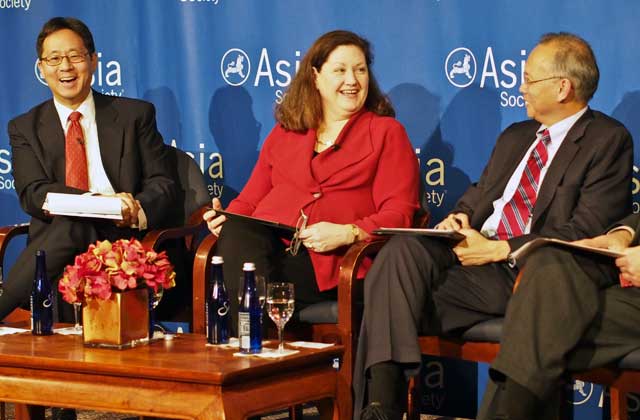 Every year, leaders of 21 Pacific Rim nations convene in the APEC (Asia-Pacific Economic Cooperation) summit to promote free trade and sustainable economic growth in a region stretching from "East Asia and Australia to the Americas" (as per the official APEC website). And every year, Asia Society and the U.S. APEC Business Coalition organize a follow-up briefing to review issues discussed at that year's APEC summit, set priorities for the next year, and assess what those trends might mean for the APEC region's future.

Held in Beijing on November 10-11, APEC 2014 was widely seen as the most productive and consequential summit in years, which makes Asia Society's 2014-15 APEC briefing — next Tuesday, December 16 — especially significant. Joining Asia Society President and CEO Josette Sheeran onstage will be U.S. Senior Official for APEC Robert Wang, incoming Chair of the APEC Business Advisory Council (and Asia Society Trustee) Doris Ho, Guillermo Luz of the National Competitiveness Council, and President of the National Center for APEC Monica Whaley. (For those who can't attend in person, the program will also be a free live webcast at AsiaSociety.org/Live at 6:30 pm New York time.)

Asia Blog reached out to Monica Whaley ahead of next week's panel for some advance insights into the discussion. Whaley was named the President of the National Center for APEC in January of 2009, after serving as NCAPEC's Deputy Director at its founding in 1994 and as the Executive Director since November of 2002.

What issues were avoided in Beijing 2014's meeting — and why?

It's important to distinguish between what the region's leaders discuss as part of the APEC agenda and what they discuss in the many bilateral meetings on the margins of the multilateral APEC meetings. APEC as an institution does not focus on security issues or issues such as the maritime territorial disputes. So when the leaders of APEC's 21 economies are meeting together they are talking about policies designed to promote trade and investment, connectivity, and sustainable growth. However, when two APEC leaders meet together on the margins of the APEC meeting they are most likely addressing key bilateral issues such as how to resolve territorial disputes in the case of China and Japan.

Coming out of the summit, how has the world's view on China changed?

The hosting of APEC provided China with an excellent opportunity to highlight efforts it is making to establish itself as a leading force in regional development. Key among these was the Asia Infrastructure Investment Bank, a China-led US$50 billion financing facility designed to support the development of desperately needed infrastructure in the region.

China also came out of APEC with strong free trade credentials by backing APEC's Free Trade Area of the Asia-Pacific and agreeing to a bilateral deal with the U.S. that will help bring negotiations to expand the Information Technology Agreement — a trade agreement that eliminates tariffs on a range of ICT-related products — to a successful conclusion.

What will be the major issues discussed in the next APEC summit in the Philippines?

Improving the environment for trade and investment is a top issue no matter where APEC is hosted, but economies do leverage their hosting to bring their own priorities to the fore. We expect the Philippines to focus on promoting the growth of small and medium-sized enterprises which make up 97% of businesses in the region, but only 35% are engaged in international business. They will also be placing a focus on the development of human capital to ensure that economies have workforces that can meet the demands presented by globalization.

Will India be granted observer status in the near future?

It's difficult to assess how close APEC is to adding any new members, something it hasn't done officially since 1998. That said, it has granted observer status to some economies in some of its working groups. For example, government representatives from Costa Rica and Colombia regularly participate as observers in APEC's Investment Experts' Group. Additionally, the United States government has made an effort to promote the participation of non-APEC members like Cambodia and Laos in APEC's capacity-building workshop on an informal basis.