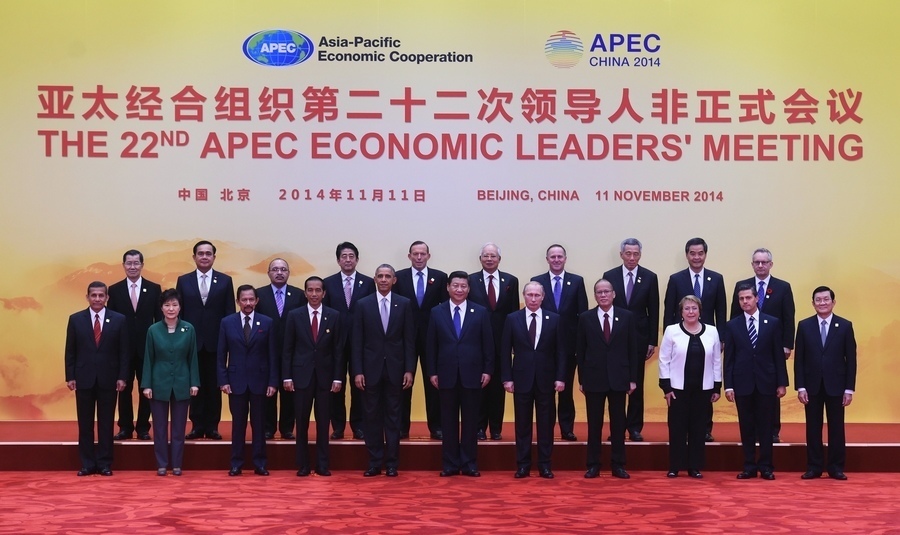 On December 16, 2014, Asia Society’s New York headquarters will host the U.S. National Center for APEC and the U.S. APEC Business Coalition in a high-level briefing on APEC, its priorities for 2015, and the region’s future. This program will feature U.S. Senior Official for APEC Robert Wang, incoming Chair of the APEC Business Advisory Council and Asia Society Trustee Doris Ho, President of the National Center for APEC Monica Whaley, and Asia Society President and CEO Josette Sheeran.

For the Asia Society Policy Institute’s AsiaConnect briefing on November 18, 2014, Robert Wang, U.S. Senior Official for APEC, and Christopher Smart, White House Senior Director for International Economics, Trade, and Investment, spoke about the key takeaways from the November 10-11 APEC summit, where President Obama met with leaders from 20 major Asia-Pacific economies. This blog post presents a condensed and edited version of their remarks, along with an audio recording of the briefing.

What were some of the key accomplishments from APEC this year?

Bob Wang: This year resulted in a wide range of outcomes. The U.S. got a lot of things done, worked very well this year with China, and developed a good set of outcomes on our priorities. In facilitating trade, we accelerated our work on our goal of achieving a 10% performance improvement for the region’s supply chain by 2015, which totals about $2 trillion per year. We did a lot of capacity building and allocated about $2 million to do this work. APEC is also beginning to focus on trade in services along the global value chain, and will look specifically at manufacturing-related services and environmental services. We hope to see this work continue as the Philippines takes over as APEC host next year.

Apart from trade, how has APEC promoted sustainable growth?

Bob Wang: There was a lot of follow through on the Environmental Goods Agreement (EGA), which was completed in 2012 and set to begin in 2015. We worked with the private sector to prepare to reduce tariffs to 5% or less for about 54 environmental products. In regard to energy, we set a target this year to double the share of renewables in APEC’s total energy mix by 2030. To do this, we expanded the number of economies participating in peer reviews of fossil fuel subsidies within APEC. Peru conducted its review this year, and Vietnam and Philippines agreed to undertake reviews next year. The U.S. and China have also agreed to participate in fossil fuel subsidy peer reviews under the G-20. The APEC economies also made new commitments on oceans, which call for protecting 10% of coastal areas by 2020, reducing fishing subsidies, and taking action against illegal and unregulated fishing in the APEC region.

What is your assessment of China’s APEC host year?

Christopher Smart: The Chinese government took their APEC host responsibilities very seriously. They wanted this opportunity for China to put an imprint on the broader economic agenda in Asia. The U.S. reached an agreement with the Chinese government on a path forward for the International Technology Agreement and announced expanded visa regimes for both countries for business, tourism, and education.

Going in to APEC, there was a great deal of attention paid to China’s goals of establishing a Free Trade Agreement of the Asia-Pacific (FTAAP) and shaping how APEC and the region more broadly move forward on that vision. This is a vision that the U.S. supports, but it has to meet the standards we are trying to set for 21st-century trade agreements. High standards for labor and the environment and comprehensive agreements are central principals in our negotiations for the Trans-Pacific Partnership.

With China’s increased focus on combatting corruption, how did that issue play a role in the APEC meetings?

Bob Wang: This year, we were glad to see that the 21 APEC economies adopted the APEC anti-bribery principles and elements of corporate compliance along the lines of international standards. This was very significant because corruption and bribery are serious challenges throughout the region. Last year, APEC established the Anti-corruption and Transparency Network to give officials in charge of bribery issues in APEC countries an arena to exchange views on best practices and help understand each other’s legal systems regarding the management of cross-border bribery cases. No one favors protecting corrupt officials or executives, and this network aims to increase cooperation on specific cases.

What steps has APEC made toward inclusive growth and regional connectivity?

Bob Wang: We have developed and adopted a 10-year regional connectivity blueprint to 2025, which would include plans to improve infrastructure development in the region, regulatory convergence, and people-to-people initiatives. We have created a dashboard to measure women’s economic participation, which allows us to track where we are doing well and where we are not doing well using about 80 different indicators. By May 2015, we will complete the study to reflect where we are in terms of women’s participation in various APEC economies. From there, we hope to establish goals to improve our work in this area. APEC has already set up a women’s entrepreneurship network to facilitate connections and accelerate access to markets for woman-owned businesses.

What is the APEC scholarship/internship initiative and will it be expanded?

Bob Wang: The United States took the lead in launching an APEC scholarship/internship initiative, which is co-sponsored by eight other economies. In the United States, private companies and universities have offered to sponsor about 30 scholarships/internships. This year, we were able to put on the list up to about 200 total scholarships/internships from these eight participating economies. This is an ongoing, sustainable initiative, and we hope more companies and universities will join in. Over the long term, we hope that these APEC interns and scholars will join to form an alumni association that will promote cross-border networking across APEC economies once they return home.

Listen to the AsiaConnect briefing with Robert Wang and Christopher Smart using the audio player below.