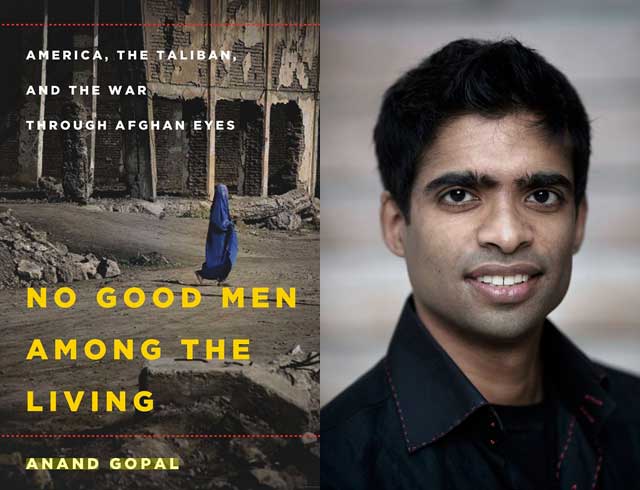 "No Good Men Among the Living: America, the Taliban, and the War through Afghan Eyes" (Metropolitan Books, 2014) by Anand Gopal (R).

2014 will an auspicious year for Afghanistan. Tomorrow, its citizens go to the polls. It is also the year the U.S. and NATO are expected to draw down the level of troops and transfer security responsibility to the Afghan government.

Anand Gopal is a fellow at the New America Foundation and has served as an Afghanistan correspondent for The Wall Street Journal and The Christian Science Monitor. Publishing on April 29, his new book No Good Men Among the Living: America, the Taliban, and the War Through Afghan Eyes (Metropolitan Books) has already drawn praise from veteran Afghanistan-watchers like Ahmed Rashid and Peter Bergen.

Via email, Asia Society caught up with Gopal in Afghanistan, where he is covering the election, on his book, what the future holds for the country, and what hope there is for peace for its people.

In No Good Men Among the Living you put together a rich collection of individual stories to provide a nuanced understanding on how the war is being seen through Afghan eyes. Could you speak a bit on how you chose the people to interview or to include in your book?

I don’t believe any particular story is every truly representative, because the truth of a story lies in its specificity. Real lives are too complex, too multifaceted to fall into neat categories like "friend" or "foe." Yet this is how we tend to see the war, so I wanted to find people who appear to conform to our notions of the enemy, the friend, the civilian, and interrogate whether this is indeed the case.

In my years in Afghanistan, I’d met dozens upon dozens of remarkable people whose stories taught me so much about the war and ourselves. In the end, though, you might say that the three main figures in the book chose me. Akbar Gul, Jan Muhammad, and Heela are gifted storytellers in their own right, with a vivid memory and an eye for detail. Just as importantly, they allowed me to do everything necessary to verify their stories, which included interviewing friends, relatives, even enemies, about personal details. Understandably, not everyone is willing to do this, and in fact, there were many stories from others I’d met that I ended up dropping because I could not check certain details, or because I could not travel to their home village.

One of the most intriguing stories is that of Akbar Gul and the involvement of the Pakistani intelligence service (ISI) in playing a double game in Afghanistan. How common was Akbar Gul’s story in relation with the other Taliban commanders you have met? Or was his story in meeting the ISI exceptional from your experience?

In some ways, Akbar Gul’s story is unique, because field commanders at his level usually don’t meet ISI officers. But Akbar Gul was a bit of a firebrand, one reason why I suspect he didn’t last long in the Taliban. The ISI’s direct contact is usually with more senior elements of the leadership — although I know of exceptions—which, among other things, helps minimize the risk of exposure. What is common at all levels, though, is the way the ISI exercises leverage — through the threat of arrest or simply by favoring certain commanders over others — to help influence the strategic course of the insurgency.

The U.S. drawdown of troops in 2014 is around the corner. On the one hand, the Taliban have reclaimed areas in Afghanistan but you also describe a Taliban that no longer has the capacity or unity to overthrow the government. What do you expect will happen?

As long as the U.S. continues to fund the Afghan government and Afghan security forces, I believe it is unlikely that the Taliban will be able to overthrow the government. They lack the firepower, manpower, unity, or popular support to be able to capture Kabul or other major urban centers. And despite reckless acts that kill civilians, such as suicide strikes and roadside bombings, they appear to be unwilling to go as far as the mujahedeen in the late 1980s and early 1990s, who laid siege to entire cities that killed thousands.

On the other hand, the Afghan government isn’t likely to win the war either. They won’t be able to uproot the Taliban from their rural enclaves in the deep south, in part because of its rampant, continuing human rights abuses, which give the insurgency a rallying cry. Sadly, this means there doesn’t appear to be an end in sight for Afghanistan’s 30-year-war.

It is unlikely that either side will get serious about negotiations unless they see no other option. Currently, the Afghan government is pursuing a negotiations tack that amounts, in effect, to asking for surrender: the Taliban should lay down their weapons and accept the Afghan constitution. While more radical proposals are sometimes floated, none have been seriously considered. The Afghan government can afford to put off negotiations because its survival is not at stake; so long as it continues to benefit from U.S. patronage, there does not appear to be an incentive to head to the bargaining table.

You can say the same, in a way, about the Taliban. While it is true that a section of the Taliban — no one knows how large — would likely be open to giving up the fighter’s life, an important section of the movement (perhaps the majority) still believes it can capture Kabul. Like the government, the Taliban are also not facing an existential threat. Moreover, they continue to enjoy Pakistani protection in the form of a safe haven for its leadership. This doesn’t bode well for peace.

A recurring theme in your book is U.S. money playing a significant role in propping up the Afghan state and security apparatus, but also in being a major hindrance to reconciliation. What is the worst that could happen if the U.S. decided to drastically reduce that support? What would happen to women like Heela Achakzai?

If the U.S. cuts off all funding, it will likely mean that the commanders of the hundreds of armed groups around the country will privatize their forces in order to keep them together — by setting up roadblocks, shaking down travelers, robbing homes, or worse. The Afghan army will disintegrate, and the Afghan police will fissure into its component factions, run by various strongmen. This all happened in 1992, when the Russians stopped funding their proxies, and there’s little reason to believe it would be different this time around.

On the other hand, if the patrimonial relationship between the U.S. and the Afghan government continues, it will be likely that Afghanistan will remain a collection of networks of strongmen and warlords in perpetuity. Unless there is a massive restructuring of the way money is spent, and a de-emphasis on the role of counterterrorism — which empowers local strongmen and militias at the expense of the central government — it appears unlikely that robust formal institutions will ever develop. This is Afghanistan’s tragedy, its catch-22: cutting funding will lead to a civil war, but continued funding will only perpetuate the failed status quo.

This means that the idea of the future, of planning for old age or grandchildren, has a different meaning for someone like Heela than it might for you or I. Even as she tries to build her life, she is always ready to flee.

Tomorrow Afghanistan will be going to the polls, and voting is likely to go to a run-off. Are you concerned about voting fraud? In No Good Men Among the Living you describe how votes are bought, including the story of how Heela was voted in herself. Does the result even matter, or is there a better trajectory for Afghanistan if a particular candidate wins?

In the insecure areas, voter turnout will likely be low because of Taliban threats. Polling centers in these areas will mostly remain open, however, meaning that local officials will likely stuff ballots. This is what occurred in the previous two elections, and there’s little indicate a major change this time around.

It’s unlikely that whoever comes out on top — through a combination of deals with rural elders, cultivating warlords, stuffing ballots, and old-fashioned campaigning — will dramatically alter the trajectory of Afghanistan, because so much of the country’s course depends on issues outside its borders. What will Pakistan’s role be in the coming years? Will the U.S. continue to prop up the state? These issues will ultimately structure Afghanistan’s future. With that being said, a handover of power from Hamid Karzai could be a positive step — assuming the rest of the country’s elite accept the final results — because it could set a constructive precedent.

John Hwang is Assistant Director for Policy Programs with Global Initiatives at Asia Society New York. Previously he served in the U.S. Army in the Military Intelligence Corps.