How a Tiny Southeast Asian Country Changed the CIA Forever 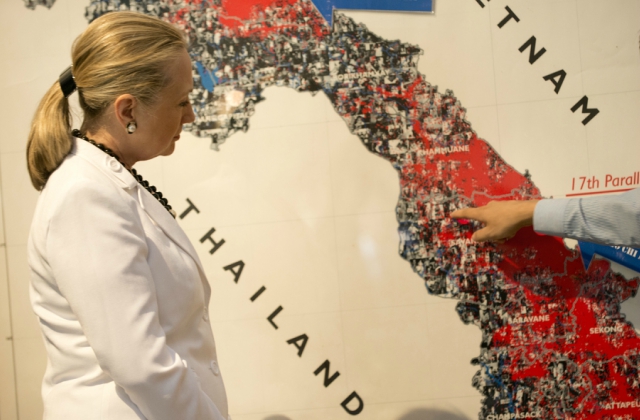 No country in world history has been bombed more on a per capita basis than Laos, a landlocked nation of 6.9 million nestled between Thailand, China, Cambodia, and Vietnam in Southeast Asia. Once a part of French Indochina, the sleepy, largely-rural Laos played a central — if little publicized — role in America's attempt to roll back communism in Asia.

Just before leaving office in January 1961, President Eisenhower approved the CIA's Operation Momentum, a secret plan to foment an anti-communist insurrection in the country. The operation grew steadily over the next two decades, resulting in the death of hundreds of thousands of Laotians and devastating the countryside. In the end, Communist forces retained control of the country — which they hold to the present day.

In his new book A Great Place to Have a War, Joshua Kurlantzick discusses Operation Momentum and describes how its consequences extended far beyond Laos. Kurlantzick argues that the operation transformed the CIA — once an agency devoted to analysis and intelligence collection — into a war-fighting entity of its own.

In a recent chat with Asia Society, Kurlantzick, a Fellow for Southeast Asia at the Council on Foreign Relations, discussed the origins of Operation Momentum, its connection to the Vietnam War, and how a tiny Southeast Asian came to occupy so much of America's foreign policy attention. The interview has been lightly edited for length and clarity.

Why did the Eisenhower Administration decide to launch Operation Momentum?

The United States had actually been involved in Laos even before the end of the Eisenhower period by supporting various conservative factions vying for control in the country. In 1960, a coup by an unknown low-ranking military officer in Laos took the U.S. and others by surprise and led to civil conflict in Laos. Although that officer wasn’t necessarily a communist — in fact, he was relatively apolitical — he was against the conservative military establishment. This triggered a civil conflict that had been already building up since the first Indochina war in the late 1940's and early 1950's. The coup contributed to the persistent fear in American politics at the time that any country that became Communist in Southeast Asia would lead to other countries becoming Communist — the domino theory.

So, Eisenhower and then [President John F.] Kennedy decided to launch this covert operation in Laos. It started out with training and arming a small number of anti-communist fighters, mostly ethnic Hmong, and then grew into a massive operation that went on for years before the U.S. ever planned to bomb and strike the Ho Chi Minh trail. The Laos war wasn’t completely separate — there was some overlap — but it was largely separate.

Why was this kept secret? Do you think that Congress would have balked at this operation? Why was the Laos War not as widely discussed as the Vietnam War itself?

First, in general, I don’t think you can ever underestimate the desire to obfuscate especially when, at that time, the U.S. had just fought to a bloody stalemate in Korea and there wasn’t a great public appetite for war. Don’t forget that what we call the Vietnam War escalated from an incident that is unclear really ever happened in full — the Gulf of Tonkin Incident — and wasn’t presented with all of the facts to the Congress and the public.

The Eisenhower and Kennedy administrations embraced the idea of using stepped-up covert action in many places, including Laos, as a means for war fighting in several reasons. One, they took the lesson from Korea that a large-scale conflict including the regular army would be politically unpopular, though ultimately, of course, they set the stage for that in Vietnam. Secondly, they thought that at least at the beginning in Laos that covert ops were effective enough that there was no need for large-scale U.S. forces. There were options presented to Kennedy for a huge land invasion of Laos but he considered them unwise.

This was an operation that really made the CIA into a major player in Washington and a paramilitary actor, a change that comes with much less transparency than the U.S. military. All those things combined to reduce transparency. But I think that overall you can never underestimate the desire for a complex operation to be done with little scrutiny because that allows it to be conducted in a way that is most amenable to executive power.

And despite Laos being considered important to U.S. strategy, it was a very remote country. Journalists were mostly unable to access bases where the Hmong and other Laotian forces operated. Congress was willing to mostly go along with the war until the late '60s and early '70s and not ask too many questions, and the American public didn’t even know that much about Laos.

Finally, you had a situation in which the CIA was exerting greater influence and saw Laos as a ticket to this influence in the foreign policy process.

How would you characterize the activity of the CIA prior to the Laos operation, and how did the operation transform the CIA?

Before the Laos operation, the CIA, created in the '40s out of World War Two, was still a spy agency focusing on analysis and intelligence collection. They did do some political operations, such as fomenting coups and political sabotage, but that wasn't most of their work. They weren't focused primarily on killing people. That didn’t mean they didn’t kill people, but that wasn’t their primary focus. There was some training of foreign fighters, but not that much.

In Laos, a small training program developed into a larger training program and finally into an operation that, by the mid to late '60s, CIA operatives were commanding troops or working to command troops on the ground in Laos, not just training them. The CIA and the U.S. embassy added in massive bombing runs to support the operation, and eventually, the training program grew so large that it included an army of tens of thousands and maybe even over 100,000 troops. What you had was the CIA and the U.S. embassy essentially running a war. Their mission had shifted from not only collecting intelligence but to also overseeing a large-scale conflict.

Despite reforms to the CIA in the ‘70s, this was a shift that never really went away. It's even been dramatically pronounced.

How did the Laos operation fit in with the U.S. war in Vietnam and the secret bombing of Cambodia?

Of course, the wars were interrelated and the overall goals were somewhat broadly shared. But the CIA and the U.S. Ambassador to Laos worked their hardest to ensure that U.S. military commanders managing the war in Vietnam kept their hands off the operation in Laos. The ambassador in Laos, Bill Sullivan, and the CIA went so far to keep U.S. military advisors assigned to them stationed in Bangkok, where they could not offer significant advice at all. They kept the U.S. military at arm’s length.

As the overall Vietnam War grew, what happened in Laos began to reflect the overall U.S. aims. What started with the U.S. helping local people fighting against Communist forces ultimately changed, and eventually the aims of the U.S. and the aims of the local people diverged dramatically and tragically. And that's a really important part of the story. The Americans didn’t even have the same aims as the people they were assisting.

Originally, Laotian anti-Communist fighters wanted American fighters to fight back alongside them and preserve their territory and shaky political system, and the U.S. was doing that. But by the late 1960s, the U.S. and to some extent, Laotian commanders were throwing Laotian forces into large-scale battles rather than using them as guerrillas — large-scale battles against the North Vietnamese army, the most hardened and successful army in Southeast Asia in the 20th century. They were getting killed. And the reason the U.S. implemented this shift is because they saw the war in Laos as an opportunity to kill more North Vietnamese and thus make the war better for the U.S. in South Vietnam. So Laos got the bad end of the stick there.

Is the transformation with the CIA permanent? Or is it possible for the CIA to go back to the role it occupied prior to Laos — being an intelligence collection and spying agency?

CIA Director John Brennan has said several times, publicly, that he wants the agency to go back to intelligence collection and analysis. But that's a very challenging goal at this point. Since the war on terrorism began, the White House, especially under the Obama Administration, has relied on the CIA along with special forces to handle the majority of low-level conflicts the United States is involved in around the world. And of course, remember, they’re also overseeing much of the drone program. I see that as very hard to go back on.

What was the significance of President Obama's visit to Laos in 2016? Was it mainly symbolic?

In the 60s and early 70s to the end of the war, Laos was a major security concern for the U.S. Whether it should have been or not is something we can debate, but it was. We'll never go back to that. Laos is a small country on the periphery of U.S. interests at best. It's a very small economic actor whose most important partners are China, Vietnam, and Thailand. So the relationship with the United States is minimal and cordial.

Obama spoke about the secret war which really devastated Laos, destroyed much of the country, and included the heaviest bombing on a per capita basis of any country ever. He discussed how the legacy of that bombing is still enormous and promised greater U.S. aid in recovering ordnance. This has some symbolic value, but not much. Although the U.S. has stepped up its cooperation with Laos on some things in recent years, including environmental issues and economic assistance, its role is still pretty small.

What’s interesting to me is not whether the U.S. and Laos — a small country with a population smaller than Los Angeles — has a very modest relationship today, but that in the ‘60s the United States decided that this same country, that was even smaller then, was of such critical national security importance. Things have reverted to the mean. But there’s certainly a lot more the U.S. can do to clean up the legacy of the substantial bombing in Laos.