How Taiwan's Election Highlights the 'Failure' of China's Cross-Strait Strategy 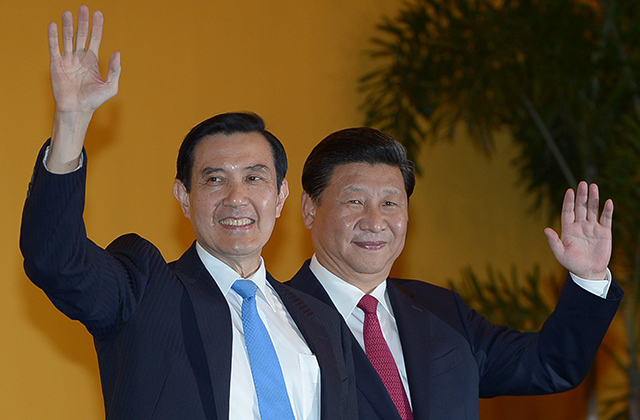 Chinese President Xi Jinping (R) and Taiwan President Ma Ying-jeou wave to journalists prior to a meeting at Shangrila hotel in Singapore on November 7, 2015. It was the first time in nearly seven decades that the top leaders of China and Taiwan met. (Mohd Rasfan/AFP/Getty Images)

When Kuomintang Party (KMT) candidate Ma Ying-jeou was elected Taiwan’s president in 2008, the news was welcomed in mainland China. The years under his predecessor Chen Shui-bian, whose Democratic Progressive Party (DPP) has traditionally favored Taiwan's independence, had strained cross-strait relations. But Ma’s more conciliatory approach to China — aimed at easing tensions and boosting the economy — opened new trade channels and made it easier for ordinary citizens to travel between the two sides. For Beijing, Ma's policies were in line with a longstanding political goal: that the two sides would grow closer until it eventually made sense to reunify.

But the landslide victory of Tsai Ing-wen and the DPP in Taiwan's presidential and legislative elections last week suggests that mainland China's strategy isn’t panning out — and may even be backfiring.

On January 27 at Asia Society in New York, Orville Schell will moderate a conversation with Jerome Cohen, Yu-jie Chen, and Douglas Paal on the implications of Taiwan’s recent election and how it could impact cross-strait relations.Learn more

For Jerome Cohen, director of the U.S.-Asia Law Institute at New York University (NYU), this outcome isn't necessarily a shock.

“Sometimes familiarity breeds contempt,” he said, "Just because you have more people from another place visit you doesn’t mean they’re going to love you. They may find more reason to vindicate their prejudice against you.”

The opening of exchanges under the KMT was a continuation of the “Three Links” policy — referring to trade, transportation, and postage — first proposed by mainland China after it launched economic reforms in 1979. The idea was simple: By first linking the economies and the people of the two sides, political reunification would eventually follow.

As Taiwan's president, Ma Ying-jeou implemented this policy and achieved unambiguous results. The number of Taiwanese tourists to the mainland increased from 4.4 million in 2008 to 5.4 million in 2014, while the number of visitors going in the other direction grew more than ten-fold from 300,000 to 3.95 million during the same period. The total trade volume between the two sides nearly doubled from $105 billion to $198 billion.

Cohen says that these exchanges have by-and-large endeared Taiwan to mainland Chinese people, but the feeling hasn’t been mutual. While Chinese visitors to Taiwan tend to admire the self-governing democracy’s political freedoms, legal system, and level of economic development, Cohen explains, Taiwanese encountering the mainland are less impressed by its social system and one-party rule. “Although you have almost a million Taiwanese people living on the mainland long-term and successfully doing business, they’re clearly aware of the big differences between the way the mainland is run and the way Taiwan is run,” Cohen said.

Tsai Ing-wen's victory was seen, in part, as a rebuke of the Kuomintang’s integration policies and a lack of transparency in dealing with China. This skeptical attitude toward the mainland was made most evident in the 2014 Sunflower Student Movement, when young protestors stormed the offices of Taiwan’s legislature over a KMT-backed trade bill with China. Critics said the measure was pushed through without due process and would leave the island vulnerable to Chinese encroachment.

Even before last week's election, however, the trend across the island has been clear: Polls taken in recent years have shown a steady psychological retreat from China. A survey conducted by Taiwan’s National Chengchi University since 1992 showed last year that the number of respondents who identify themselves only as “Taiwanese” grew from 48 to 59 percent between 2008 and 2015. Those who consider themselves both “Taiwanese” and “Chinese” fell from 43 to 33 percent, while those identifying solely as “Chinese” hit a record low of 3 percent. Meanwhile, the proportion advocating immediate or eventual unification with China fell from 20 percent in 2003 to 7 percent in 2015.

“The DPP victory represents, and will continue to enhance, a growing Taiwan identity that is different from China’s and will further increase the psychological distance across the Taiwan Strait,” said Yu-jie Chen, a research scholar on human rights developments in Taiwan and China at the U.S.-Asia Law Institute at NYU. Chen noted that an increasingly skeptical attitude in Taiwan doesn’t necessarily indicate a failure of China’s engagement strategy, but rather an indication of how Beijing’s wider actions are being perceived internationally.

“The recent disappearance of five Hong Kong publishers, including Mr. Lee Bo, who appeared to have been kidnapped from Hong Kong to mainland China, has been widely reported in Taiwan as a horror story of the failure of ‘One Country, Two Systems,’” Chen said. “The incident, along with China’s suppression of Hong Kong autonomy and domestic dissent, serve only to further alienate Taiwanese, despite more economic engagement and exchanges.”

But Douglas Paal, formerly an unofficial U.S. representative to Taiwan as director of the American Institute in Taiwan, says that, in spite of frequent comparisons, Hong Kong’s situation has had a limited impact on the Taiwanese public. “There was always a problem trying to sell Taiwan on the Hong Kong model,” Paal said. “People were very skeptical of ‘One Country, Two Systems.’ I don’t think [Hong Kong] has any more of an effect than it had before.”

Paal says that as Taiwan grapples with a slowing economy, the public’s growing aversion to China may have more to do with globalization than politics, especially when it comes to people under 30 that are relatively new to the workforce — a demographic that disproportionally votes DDP and rejects “Chinese” identity. “You’ve got a lot of people entering workforces at lower wages in these newly opened economies [like China], and they’re getting some of the jobs that used to be done in Taiwan,” Paal said, adding that China’s demand for highly skilled Taiwanese workers is also diminishing as it develops its own skilled workforce.

Jerome Cohen agreed, saying that “the mainland policy of President Ma has been very good in many respects, especially for big businesses operating in China. But the smaller business people and the average working person are not very happy.”

Paal says that from Beijing’s perspective, Taiwan’s election result likely indicates that the “Three Links” strategy has fallen short. “Some people would say ineffective, others would say failure, but clearly this is not what they were hoping to achieve.”

In addition, China seems to lack an alternative strategy to win the hearts and minds of Taiwan’s people. “[Chinese President] Xi Jinping has had many issues to deal with,” Chen said, citing the anti-corruption campaign, slowing economy, suppression of civil society, and conflicts in the South China Sea. “Under these circumstances, Xi certainly does not want to risk war with Taiwan when there is no provocation from across the Strait.”

“What Tsai Ing-wen did in this campaign was focus on domestic issues,” she continued. “Including the economy and social justice, and downplayed the issue of cross-strait relations by maintaining that she will keep the status quo and seek peace and stability with China, which was obviously a successful strategy.”

Watch: Yui-Jie Chen explains why Taiwan is not interested in adopting a "One Nation, Two Systems" arrangement with mainland China: