How China's Taiwan Strategy Is Backfiring 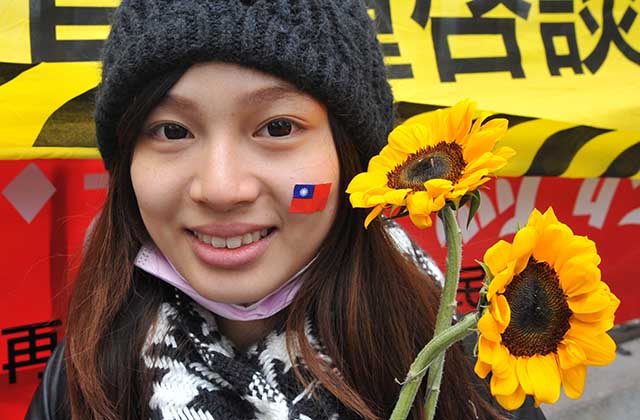 An activist holds sunflowers and wears a sticker of Taiwan's national flag on her face in support of student protesters occupying the parliament building in Taipei on March 21, 2014. (Mandy Cheng/AFP/Getty)

For decades, there has been uneasy détente between Taiwan and mainland China, which split at the conclusion of the Chinese Civil War in 1949: China continues to claim Taiwan as a province, while Taiwan self-governs but has not made any formal declaration of independence. In 1992, this “consensus” was formalized with both sides agreeing that there is only “one China” — though each side has a different definition of what that means.

Earlier this year, the traditionally pro-independence Democratic Progressive Party (DPP) won control of both Taiwan’s legislature and presidency for the first time ever in a landslide victory. The result was widely seen as a rebuke to the Cross-Strait economic policies of the long-ruling Kuomintang (KMT), which has increased the island’s economic reliance on mainland China. Newly elected Taiwanese President Tsai Ing-wen has neither affirmed nor renounced the 1992 consensus and Chinese President Xi Jinping has said reunification cannot be postponed forever, adding to a sense of tension.

In the new book Taiwan’s China Dilemma, Chinese University of Hong Kong Professor Syaru Shirley Lin describes how Taiwan is in a tough position: If it restricts trade with mainland China, it cuts off a major export market, a source of investment, and a driver of economic growth. But if it increases economic reliance on China, it gives more leverage to a government bent on reunification and leaves the island vulnerable. Taiwan’s evolution in dealing with this dilemma has been shaped by a rapid shift in Taiwanese identity and how its people see themselves. In an interview with Asia Blog, Lin describes how this shift unfolded and how Beijing’s reunification strategy appears to be backfiring.

Your research focuses on how identity in Taiwan has had economic implications that aren’t necessarily rational. Can you elaborate on that?

I initially started off trying to understand the puzzle of why Taiwan's economic policy toward China has oscillated so dramatically over the last 30 years, especially as Taiwan has invested and trades more and more with China. Today, trade and investment have both reached over $150 billion, so there's no doubt that Taiwan's economic future is very much tied to China's. 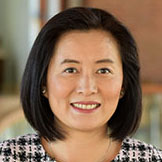 Until Taiwanese identity was consolidated and fully debated, Taiwan was unable to choose a consistent economic policy toward China because most of the discussion was not focused on whether opening trade and investment with China would bring about more jobs or more equity in society, but was much more about Taiwan's political future and who Taiwanese are as a people.

Since 2009, a majority of the population have said they are Taiwanese and nothing but Taiwanese. Today, only 3 percent identify solely as Chinese, compared to 1989, when 52 percent of Taiwanese said they were Chinese and nothing but Chinese. This is a dramatic shift in identity in 30 years. This consolidation from 2009 onwards means that people no longer focus on whether you’re “Taiwanese” and support one economic policy, or are “Chinese” and therefore support another policy.

Now discussions of Taiwan’s policy toward China are less emotional and more focused on economic impact than in the past, since more than 90 percent of Taiwanese believe they are either exclusively or partially Taiwanese. So how can they sustain Taiwan’s vibrant democracy? This is what Taiwanese identity has increasingly become: It is a way of life in which anyone who embraces democracy, the rule of law, freedom of speech, and freedom of the press is considered Taiwanese and can join the debate. Without the contestation over national identity, economic policy can be based on economic logic and extreme economic policy options have become less appealing.

That doesn't mean consensus is easy — a community still has to prioritize economic growth vs. equality vs. economic sustainability, among many national interests. All of these interests involve tradeoffs, and even for a group of people with a consolidated national identity, this can still produce a very intense debate. But at least that debate is much more focused on the economic consequences of further economic liberalization — whether it will create jobs to integrate with China more, or actually destroy jobs, for example.

In 2014 there was the Sunflower Movement, where young Taiwanese stormed the offices of the legislature over a KMT-backed trade bill with China, and the KMT’s China dependent economic policy has been seen as a major reason why Tsai Ing-wen and the DPP swept to power earlier this year. But how much of this is a China problem, and how much is just fallout from those who’ve lost out on globalization — a situation many countries are grappling with?

In Taiwan's case, its challenge with regard to globalization is both unique and common. It is common in the sense that Taiwan is facing widening inequality, an aging population, and stagnating real wage growth — all problems that plague other high-income Asian countries like Korea, Hong Kong, Singapore, and Japan.

Many European countries have similar issues with widening inequality, youth unemployment, and a battle between the haves and the have-nots. We saw with Brexit a backlash in the UK against European integration. But in Taiwan’s case, globalization is primarily mainlandization because Taiwan is sending 60 to 70 percent of its global outward foreign direct investment into China. So globalization and integration with China are closely linked and perceived by many to be the same thing.

The Sunflower student movement is a very interesting case study which shows how identity can become salient again when it is undermined. The perception that a consolidated Taiwanese identity that was forged over several decades was increasingly being threatened by China’s assertive attitude and policy led students and many other Taiwanese to be concerned about a service trade agreement negotiated by the government. Many thought the trade pact would not only deepen Taiwan’s economic dependence on China, but also promote further socio-economic integration with China because it will allow Chinese investments into Taiwan, which may erode values that Taiwanese cherish.

What do you make of Donald Trump’s recent call with Tsai Ing-wen?

It should not be overly alarming because it doesn't indicate a permanent shift in U.S. policy. It could be a one-off, which has happened several times in the last 30 years — an action taken by Beijing or Washington that seems to be contrary to established policy, but does not produce any lasting change because it was not repeated or was even modified or revoked. And if Trump is using Taiwan as a way to balance China, then that would mean Taiwan is simply a means to an end rather than important to the U.S. in its own right, and the welfare of the Taiwanese people may be overlooked.

There are many advisors close to Trump who are sympathetic to Taiwan's plight and I think that supporting a vibrant democracy and hoping there will be a peaceful solution to the Taiwan issue is something that Americans should stand for. America as the leader of the free world should support the first Chinese democracy. If a lively democracy cannot continue to exist simply because China overwhelms it through the exercise of superior military and economic power, then this will be another case of a formerly independent political entity being taken over by force or coercion. But we don't really know whether Trump is wedded to any long-term change in Taiwan policy yet.

Since the beginning of China’s reforms in 1979 — starting with the “Three Links” policy — China’s strategy toward achieving reunification with Taiwan has largely been to increase economic and people-to-people ties through increased contact, trade, and tourism. At this point, can this approach be seen as a complete failure from Beijing’s perspective?

Listen to the Asia Society Podcast explore the implications of Taiwan's 2016 election, and what it could mean for the future of relations with mainland China.Learn more

It is highly disappointing to Beijing. Over the course of 30 years, when China believed it was giving so much economic benefit to Taiwan, Taiwan’s self-identification went from a majority of Taiwanese thinking they were Chinese to only 3 percent. Not only that, but only 1.5 percent of Taiwanese support immediate unification.

Beijing can double down on this strategy, which is to continue using economic benefits — not just with Taiwan but with the rest of the world, whether through One Belt One Road or initiatives like the Asian Infrastructure Investment Bank — and hoping that those economic benefits will bring about a political spillover so that China will gain international respect, and specifically, make the Taiwanese voluntarily lean toward unification.

Economic relations can change one's identity, as many empires have tried to achieve in the past, but it takes a very long period of time. And this entails not only providing consistent and equitable economic benefits but also accepting multiple identities within the larger empire. Taiwanese should be able to consider themselves both Taiwanese and Chinese and not have to choose between them. Moreover, economic benefits have not been consistent or equitable enough to create that kind of soft power.

Beijing also has other options that are not ideal from its perspective. It can exercise its hard power or change China domestically to bridge the gap in political values and institutions between the two sides.

Do you think more contact between Taiwanese and mainlanders has been counterproductive toward Beijing’s goal of reunification?

Yes. In fact, the younger generation in Taiwan that is feeling less and less Chinese is a generation that grew up being able to go to China very frequently. So they have absolutely no problem understanding China. They go there all the time — maybe for school, maybe for work, maybe just for a weekend party or a midterm break, and yet they have become more Taiwanese than ever. So why is that?

I think that people-to-people exchanges, just like economic interactions, can propel a further understanding but can also make you more aware of how different you are. The Taiwanese thought they were Chinese, but once they went to China, that interaction actually made them more aware of how different they were — especially in terms of the democratic values that Taiwanese espouse.