Experts: Reform in the Middle East Must Come From Within | Asia Society Skip to main content

Experts: Reform in the Middle East Must Come From Within 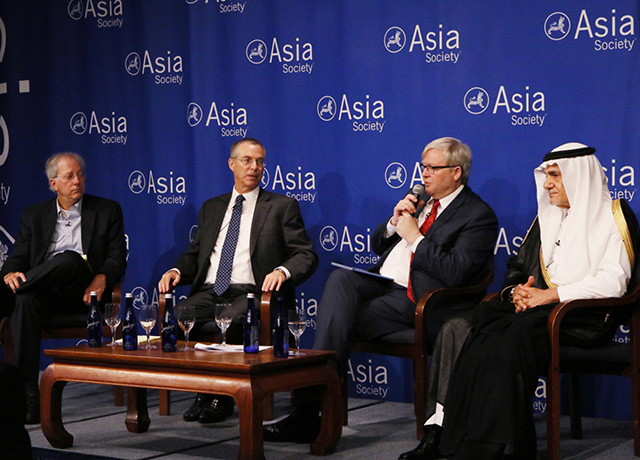 The outside world cannot ignore what's happening in the Middle East — no matter how much it might like to.

"I often say the Las Vegas rules don’t apply here — what takes place in the Middle East doesn't stay in the Middle East," said Dennis Ross, counselor and fellow at the Washington Institute for Near East Policy, during a high-level discussion at Asia Society on Friday. "We the United States cannot insulate ourselves from the region."

But while intervention by the U.S. and other external forces has in some ways been constructive in the region, Ross and other experts say that implementing homegrown solutions is the best strategy for achieving long-term stability.

During the conversation, which was moderated by Asia Society Policy Institute President Kevin Rudd, panelists including Ross, a veteran diplomat in the region, Michael Herzog, the Milton Fine International Fellow at the Washington Institute for Near East Policy, and Prince Turki Al-Faisal, member of the Saudi Arabia royal family and chairman of the King Faisal Center for Research and Islamic Studies, all cited internally driven changes as a significant contributor to the future stability of the Middle East alongside diplomatic dialogue and deal-making.

“We all talk about political solutions, but we neglect the fact that the region suffers from very structural, basic maladies, that are within the societies,” Herzog said. “So you need to provide long-term, bottom-up solutions. You need to rebuild the social structure, the social fabric, and invest in long term education plans and economic plans.”

Herzog added that this will stem the region's most urgent issue: “Provide an alternative ideology to [the Islamic State] and its likes,” he said. “That is the real antidote to ISIS. Not only top-down political solutions.”

Prince Turki added that in Saudi Arabia, such reforms are not just limited to economics — basic changes in the kingdom's society were also needed.

"Part of that reform includes dealing with issues of, let's say, bureaucratic corruption in the kingdom, which affects everyday life,” he said. “It also includes an emphasis on elevating the role of women’s participation, public and otherwise.”

Check out the video below to watch the full program.