Dan Rather on the Biggest Story He's Covered in Asia [Video]

This is the third in a series of exclusive video interviews with veteran journalist Dan Rather, former anchor of CBS Evening News, who visited Asia Society Studios in New York City in late June. Rather, 80, currently hosts the investigative news magazine Dan Rather Reports, which airs on AXS TV. Rather's memoir, Rather Outspoken: My Life in the News, came out in May.

In the segment embedded above, Rather tells me what he considers to be the biggest story he's covered in Asia. The answer may surprise you.

Gosh, I have so many memories, both small and large. On a large scale, coming to understand, and I did understand, what it was about, what it was really about, and that is a tightly contained, tightly held dictatorship and young people, led, as frequently is the case by students, rising from below and just saying, "This won’t do. We won’t stand for this." Won't stand for what? Things like you couldn't get a ticket for a train ride out of Beijing to some fairly well known city in China, such as Wuhan, unless you went to the train station three days ahead of time, managed to find somebody to pay off so you could get grandmother on the train with you to take you back. It these sort of real people in real time with real problems that caused this explosion from below, saying, "Listen, we're not trying to topple the whole government, we're not trying to topple the whole Marxist-Leninist-Maoist system. We want these outrages to stop." To understand then, it was never a [inaudible] experience.

There were smaller things, I was camped out on Tiananmen Square with the students at the very beginning of our coverage there. And I’d taken, which every foreign correspondent does, my, you know, kit, and I woke up one morning to the following scene: I always carried as kind of an emergency food supply, peanut butter in a tube — you can buy it, peanut butter in a tube. And I woke up one morning, and a student, a very bright student, was brushing his teeth with my peanut butter, and saying, "This toothpaste tastes terrible." 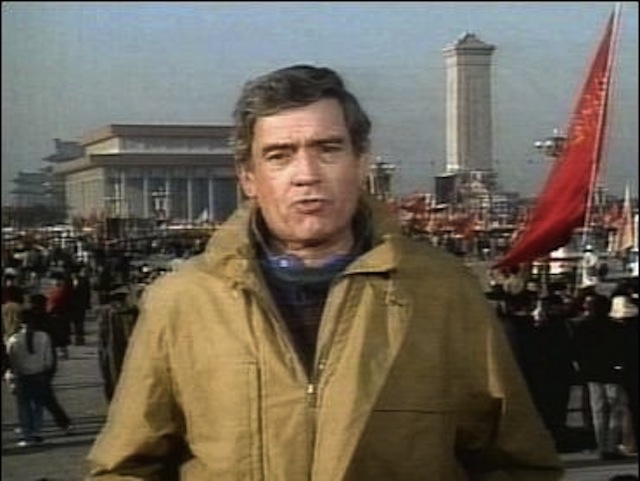