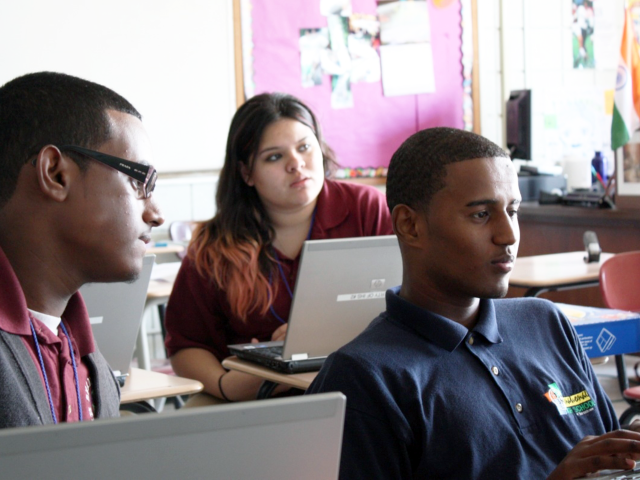 The other day I drove a stretch of US-59 from Houston's Bush International Airport to a high school in a fairly beaten-down neighborhood. A few years ago, Sharpstown High School was on what its principal called a "death march." Six years later, Sharpstown International is among those earning the district's highest rank: "exemplary."

"Six years ago, we didn't have anything," Sharpstown International Principal Chang Yu says. Faced with a failing school, the Houston Independent School District asked Asia Society to help start a new small school, Sharpstown International School, in the same neighborhood. The idea was to use proven reform efforts to make unsuccessful schools successful. Chang adds, without prompting or hesitation: "Without the Asia Society we wouldn't be here."

It was great to hear that, of course. I had read the Asia Society position papers and listened to Education Department chief Tony Jackson speak about his team's work for months, but before this day I hadn't walked the halls of one of our hallmark schools, schools now part of our International Studies Schools Network (ISSN), where the proposition is basic: learn about the world, and you'll be better prepared for the world once your school days are done.

So here was Hiwot Gabreyes, a teenager of Ethiopian descent, just back from a semester in India. "It's changed my life," she said. Hiwot and her classmates have studied the globe and developed a passion for the world well beyond their backyards. "My eyes are open now," Hiwot says.

In every class, there is an emphasis placed on some global angle. So Kyle O'Heron's math classes examines the way trigonometry can be used to map climate change; Oscar Le's biology class takes up global health issues; current world affairs and the Model U.N. are standard fare. And so on.

It's not that the meat and potatoes — reading, writing and arithmetic — are neglected; in fact, students' performances on standardized tests have risen sharply. What's different at Sharpstown is that the words "world", "Asia," and "global" are in the air, painted flags decorate hallway floors, and students are fluent not only in Mandarin, say, but in what you might call the language of globalism.

"I see and understand the world in a whole new way," says Eric Medina, who credits the curriculum with sparking an interest in global studies, and then a semester in China with firing a passion to do more. Medina returned and founded something he calls the "World Scholar's Group" aimed at motivating other Sharpstown students to study abroad, and then helping them find opportunities to do so. "I'm just brainstorming with these kids," Medina says. "I want to help them have an experience like I had. It's all about getting ready for the world. About opening your mind."

Every encounter at Sharpstown inspires. The band that mixes James Brown with Indian dance music; the administrator who says his job is to "make these kids just a little uncomfortable"; and a girl named Arsema Kidama, who says that for her, a global education is an education in the power of diversity. "You realize," she says, "that you might eat differently, dress differently, or speak some different language. But you realize that we aren't really that different from each other. We have so much to learn from others." Well put, Arsema.

The student body at Sharpstown is 70 percent Latino, 20 percent African-American, and only six percent white. Many are from tough neighborhoods, places where gangs and drugs and other vices are common. At other schools in this neighborhood, says Josue Zayala, failure is common, and it isn't "cool" to study. But this, says Josue, "is a school where all you ever hear is success, success, success."

Well said, Josue. Nice to hear. And nice that Asia Society has played a part.