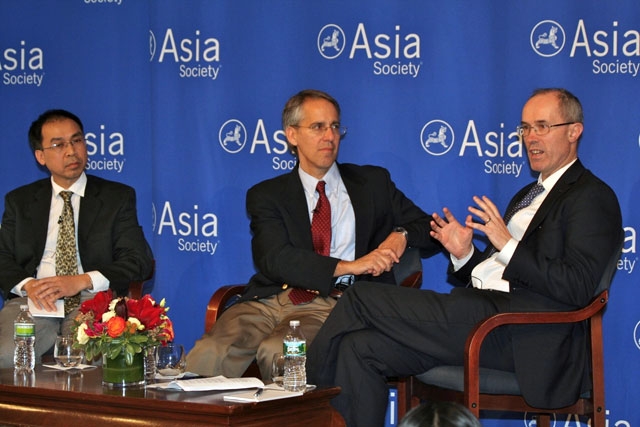 In New York last Thursday, Financial Times journalist Richard McGregor received Asia Society's 2011 Bernard Schwartz Book Award for The Party: The Secret World of China's Communist Rulers, an honor for which he was presented a $20,000 prize at an Asia Society luncheon.

Now in its third year, the Bernard Schwartz Book Award is the only award that recognizes nonfiction books for their outstanding contributions to the understanding of contemporary Asia or U.S.-Asia relations. The Party was selected from more than 100 nominations submitted by U.S. and Asia-based publishers for books published in 2010.

Also on hand for last Thursday's luncheon was University of Oregon Political Science professor Tuong Vu, whose study Paths to Development in Asia was selected as a runner-up for the 2011 award. Asia Society Associate Fellow Jeffrey Wasserstrom, who reviewed The Party for The Daily Beast in 2011, moderated the program.

Following are some highlights of the discussion.

McGregor describes how his book has been received inside China's halls of power (1 min., 42 sec.):

Responding to a question from CFR Fellow Jerome Cohen, McGregor and Vu describe the emerging legal frameworks in China and Vietnam, respectively, and how they're seen as helpful to economic development (3 min., 34 sec.):

McGregor describes how China's Communist Party has evolved and adapted over the last 25 years (2 min., 9 sec.):