Looking Ahead: Learning to Speak Each Other’s Languages, Again 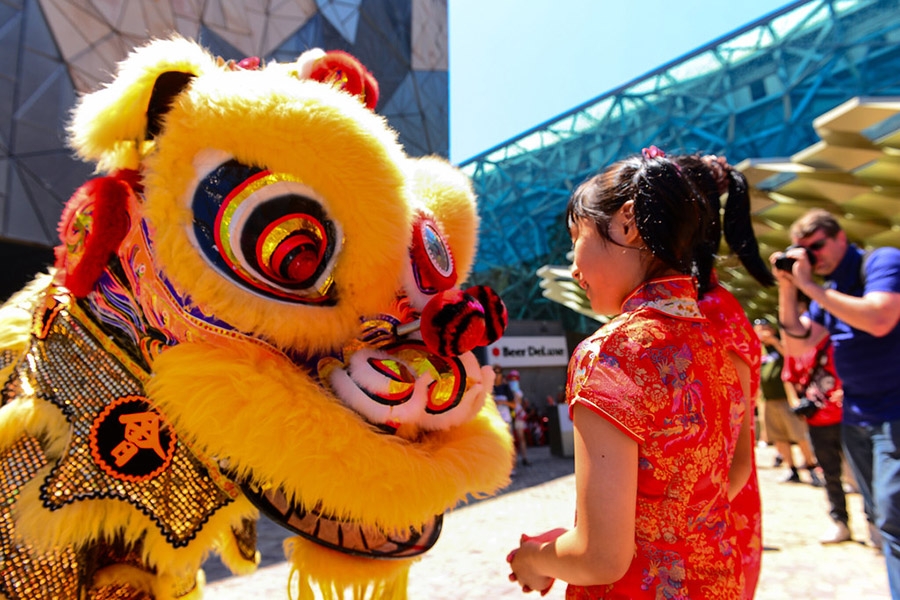 Melbourne’s locked-down neighbourhoods are home to one of the world’s most culturally diverse communities. Here you can find most of the world’s major cultures, more than one hundred nationalities and as many languages.

Melbourne and Sydney are also our gateways to Asia – with an equally diverse community of nations whose prosperity and peace are strongly interlinked with our own.

Crises often create dangerous fault lines within societies and between nations, when the blame for domestic or global problems is attributed to a country, or to an ethnic, religious, or cultural group.

The COVID-19 is a crisis like no other. It has put enormous pressure on our health, economy, and society. It has also exposed vulnerabilities in our multiculturalism and our ability to engage with our region. If uncertainty about the future course of the pandemic and a recession deepen, we may see fractures in our social cohesion. Beyond our borders, a more strategically-contested, and less affluent, region will be more difficult for Australia to navigate. Yet it is in this region that we will need to preserve peace and continue to grow our prosperity.

Speaking each other’s languages and understanding the basics of each other’s cultures is a good place to start thinking about these challenges. It will help us communicate with our neighbours across the street as well as across the ocean.

Too often, the issues of Australia’s Asia competency and multiculturalism have existed in parallel policy and intellectual universes. The fact is that they are directly interlinked.

An inclusive and connected community contributes to better social cohesion. It also lifts our capacity to engage with our region and enables a more creative and resilient economy.

Speaking with our community

Successive Australian governments have been consistent in their commitment to protect the diverse social fabric of our multicultural community against ugly manifestations of racism, xenophobia and intolerance.

Australia’s multicultural community is as resilient as it is diverse. But the pandemic has exposed invisible but nevertheless real boundaries between these communities and the rest of Australia. These boundaries are economic, social and linguistic.

Insecure work pushed many of our young and new Australians to work multiple jobs across different sites, with no sick leave and in fear of losing their incomes. One of the other factors is a breakdown in communications between government and community, due to the quality of the messaging in community languages on the one hand, and poor command of English and overall knowledge of the Australian system on the other.

The two go hand in hand. A functional knowledge of English is critical to understanding how Australian laws, workplaces, education, and health systems work. Equally, a working knowledge of our core community languages is a critical asset for those government agencies providing services, our education sector, and the Australian community at large.

Both involve sharing the responsibility for proactive learning: about your new country, and the new and different members of your community.

The pandemic has also led to an increase in incidents of racism towards Australians of Asian heritage, migrants, students and visitors from Asia. In February 2020, the Australian Human Rights Commission recorded more race-related complaints under the Racial Discrimination Act than in the past year.

These issues are concerning, but they do not yet indicate systemic flaws in our multiculturalism or breakdown in social cohesion. The Scanlon Foundation’s authoritative, longitudinal “Mapping Social Cohesion” report for 2019 indicates a continuing public support for multiculturalism for the period from 2007 to 2019.

But the survey – taken before the pandemic – also reports a subtle but nonetheless real long-term deterioration in perceptions of safety, discrimination, economic opportunity, acceptance of immigration and a sense of belonging.

The risk of a collapse in public and political support for multiculturalism and immigration – gradual or sudden – is likely to grow if the pandemic and the recession are prolonged.

Speaking with our region

The strength of our multicultural society is also a significant asset in our engagement with Asia and the world.

For decades, Australia has been building – some argue with varied degrees of success – our Asia literacy and ties with the region. We have a lot to show for it: our economy is plugged into Asia’s burgeoning markets and, in better pre-COVID times, a rising flow of migrants, students, tourists and investors, has contributed to our economy, enriched our society and brought us closer to the region.

But remarkably, the study of a second language by Australian students has decreased drastically from the 1960s when some 40 per cent of high school students studied another language, to around 10 per cent today. A perceived lack of value attached to learning Asian languages has created a self-perpetuating cycle of declining supply of teachers and resources and dwindling demand from students, parents and employers.

It is not all bad news. Australia is developing its Asia literacy elsewhere. Despite the decline in traditional language studies in schools, the last decade has seen a rise in university and professional programs aimed at improving our understanding of Asia.

Before the pandemic, the New Colombo Plan – a signature scholarship program conceived and delivered by Julie Bishop – has been sending hundreds of Australian university students to Asia.

The past decade has also seen the emergence of volunteer-led youth dialogues, building professional networks between the new generations of Australian and Asian leaders.

The new National Foundation for Australia-China Relations – a better-resourced and empowered successor to the 40-year-old Australia-China Council – will be an influential new player in growing our China competency and facilitating increasingly narrow channels of engagement with the People’s Republic of China in a difficult bilateral and global context.

But the pandemic threatens to reverse these gains, with education exchanges on hold, immigration intake dramatically decreased and government, philanthropic and family budgets under stress, threatening the future of Asia engagement institutions and programs. Yet, as Australia searches for new sources of growth amidst a global recession, and for partners to maintain a rules-based order and a balance of power in Asia, it must find them in the region. It means our businesses, governments and community need to know better than ever how Asia’s markets, political systems and societies work.

Australia cannot afford to lose the gains of decades of successful, bi-partisan and whole-of-society efforts to build the world’s most successful multicultural society. Neither can it afford to step back from the deepening of our understanding of Asia. Both efforts should be an integral part of our post-COVID economic and social recovery.

Here is where we can start:

First, we must begin by reaffirming Australia’s commitment to be an open society and economy. We must always remind ourselves why Australia needs to be – in Prime Minister Scott Morrison’s own words “an outward-looking, open and sovereign trading economy”. Our leaders can extend this description to include a welcoming, culturally competent and inclusive society. It is a message that will be critical to the recently established Taskforce to attract global business and talent to Australia. The strength of our multicultural and multilingual society will certainly be attractive to the world’s best minds.

Second, English language is fundamental to the success of Australian multiculturalism. Knowing and using it saves lives (especially in pandemics and other emergencies), improves education and economic prospects, and builds vital societal ties. Australia already has a highly effective program – the Australian Migrant English Program (AMEP). A review by the Scanlon Foundation recommends seven steps to renew the program. The announcement by Alan Tudge, Acting Minister for Immigration, Citizenship, Migrant Services and Multicultural Affairs, to grow the AMEP suggests that the Government is moving to implement these vital changes. AMEP should be supplemented by state initiatives, working in tandem with each other, but customised to different local circumstances.

Third, we need to preserve the institutions that build our Asia competencies. The pandemic is also an opportunity to reinvent our national approach to Asia literacy. Too often, Asia literacy in Australia has been defined in narrow academic terms of linguistic competency. The policy of mass Asia literacy programs with a focus on schools has not delivered the results we expected.

There is a place for deep, academic, multi-year or lifetime study of Asian languages with complete fluency as the outcome. But we also need to enable Australians to learn about Asia at different points of their lives, through a wide range of education, lifelong-learning and professional development and experiential pathways. Such an approach will create an Asia competency ecosystem which will connect different tiers of our education system, employers and community, and unlock the power of digital technologies.

Finally, the solutions to the challenges above lie within our own community.

By enabling greater participation of Asian-Australians (and Australians of other non-European migrant groups) in the leadership of our institutions, we will build a more culturally competent leadership pool, representative of our society. The 2018 ‘Leading for Change’ report found on average only 3 per cent of Australian senior business, political, public service and university leaders are from non-Anglo-Celtic and European backgrounds. This challenges Australia’s egalitarian self-image and undermines our prosperity.

A diverse leadership will embed a vital cultural intelligence in our public service, politics, media, business, and education institutions, so its leaders can speak with our community and our region more confidently and effectively. We are already doing it. But we can all do better. We have Parliamentarians Gladys Liu and Penny Wong, Ambassadors James Choi and Harinder Sidhu, and CEOs Shemara Wikramanayake and Vik Bansal. And we are a better country for them, not only because of their talents and intellect, but because they serve as role models to those that will follow.

Australia is at a critical juncture. The pandemic has exposed our vulnerabilities. But it also showed the strength of our national character. Our multiculturalism and our knowledge about Asia are intrinsic features of this character. Both are holding up against the adversity of this once-in-a-generation crisis. But cracks are appearing. It is within our reach to ensure they do not become the fault lines that divide us.

Philipp Ivanov is CEO of Asia Society Australia. Shazleen Lateef is an independent education consultant. They have worked in education, development and government in China, Lebanon, Taiwan, Poland, Russia and Australia for over two decades.

An edited version of this essay first appeared in the Melbourne Asia Review on 10 September 2020.