For lighting our world in a groundbreaking and sustainable way 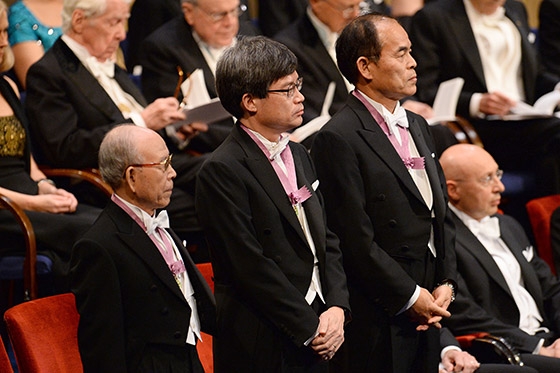 By now you’ve probably seen an LED light bulb, or even used one in your own home. And you likely know they are energy efficient, environmentally friendly, and, over time, easy on the pocket book. But few actually stop to think about the remarkable technology housed inside these devices — or the three history-making Japanese scientists who made it all possible.

The introduction of LEDs, short for light-emitting diodes, has sparked a transformation of the lighting industry, but it also marked the end of a long, arduous journey for the scientific community. White LED lamps require a combination of red, green, and blue light, and while researchers were able to create red and green LEDs back in the 1950s and 1960s, they struggled for three decades to create the elusive blue. The barrier was finally broken when Isamu Akasaki and Hiroshi Amano of Nagoya University first made a simple diode from semiconductors in the late 1980’s, followed by Shuji Nakamura of the Nichia Corporation, who discovered the remaining missing layers needed to produce a bright blue light emitting diode in the early 1990s.

Sound confusing? Arcane? Maybe, but the consequences have proved game-changing on a global scale. Lighting accounts for one-fourth of the world’s electricity consumption, and LED technology contributes to conserving the Earth’s resources, as well as providing an affordable source of light for millions around the world without access to electricity grids (due to low wattage requirements, LEDs can utilize cheap solar power).

For their innovation, Akasaki (Meijo University), Amano (Nagoya University), and Nakamura (University of California, Santa Barbara) were awarded the 2014 Nobel Prize in Physics. Frances Saunders, president of the Institute of Physics, hailed their accomplishments: “This is physics research that is having a direct impact on the grandest of scales, helping protect our environment, as well as turning up in our everyday electronic gadgets.”