For changing the world, one building at a time 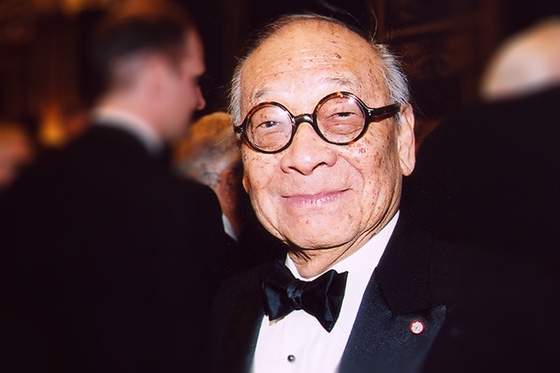 Even if you don’t know his name, you’ve seen his work: the white blocks of Washington’s National Gallery of Art; the tall, stunning, angular Bank of China building in Hong Kong; and, of course, the dazzling glass pyramid which greets visitors to Paris’ Louvre Museum. Each structure is a jewel, and each one a masterwork of I.M. Pei, who has left his imprint on nearly every corner of the globe, and is widely regarded as one of the greatest architects the world has ever known.

Born in China in 1917, Pei arrived in the United States in the 1930s and, in 1948, began work as the in-house designer for the New York property developer William Zeckendorf. As his country of birth became engulfed in revolution and chaos, Pei dove into large-scale projects across the U.S. Seven years later, he had a firm of his own.

But in the 1970s, the lure of Pei’s native land proved too strong to resist. Although decades of post-revolutionary turmoil had destroyed much of China’s architectural heritage, Pei went to work, undaunted, on a hotel in Beijing’s Fragrant Hills. Initially shunned by China’s Communist leaders, the hotel now plays host to state dinners and other official functions. Later, Pei would add another jewel to his architectural legacy in China: the stunning Suzhou Museum north of Shanghai.

More than three decades ago, in 1983, Pei was recognized with the Pritzker Prize, considered architecture’s equivalent to the Nobel. At the pinnacle of his profession, he decided to give back. Pei used the $100,000 in prize money to establish a scholarship fund for Chinese students to study in the United States — provided that they returned to China to practice their profession.

Today those students — and the thousands of architects whom Pei has taught and mentored over his long life — stand as another towering legacy, beyond the buildings themselves.

“Architecture is the very mirror of life,” Pei says. “You only have to cast your eyes on buildings to feel the presence of the past, the spirit of a place; they are a reflection on society.”