For breaking the glass ceiling, transforming an industry, and reaching the masses 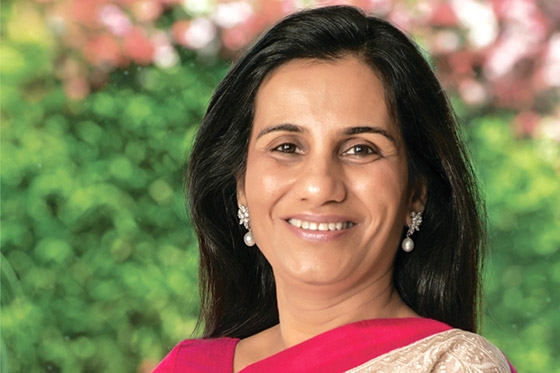 Chanda Kochhar was just 22 years old when she joined ICICI Bank as a management trainee in 1984. By the time she was 47, she was CEO. Kochhar not only made history — she became the first woman to head an Indian bank — she also transformed the entire Indian retail banking industry.

Under Kochhar’s leadership, ICICI Bank has achieved great milestones year-after-year by expanding its businesses, leveraging technology to bring value to its urban and rural customers, and partnering with the public and private sectors to create new opportunities.

By shattering the proverbial “glass ceiling,” Kochhar has been an inspiration to many young women and has racked up numerous awards and accolades. These include winning the prestigious Padma Bhushan, one of India’s highest civilian honors, in 2011; being featured in Time’s “100 Most Influential People in the World” in 2015; ranking 36th on the Forbes “World’s 100 Most Powerful Women” in 2015; and ranking second in Fortune India’s list of “Most Powerful Women in Business” in 2014. Kochhar received an honorary Doctor of Laws degree from Carleton University in Canada in 2014 in recognition of her pioneering work in the financial sector, effective leadership, and support for engaged business practices.

Today many young women look up to her as a role model. She tells them to fight their “unconscious inhibitions” and move forward, even if they think they will fail. “Whenever there’s a challenge, I see an opportunity in it,” Kochhar has said. “You have to find a way of converting challenges into opportunities. That’s the way one learns and moves forward.”