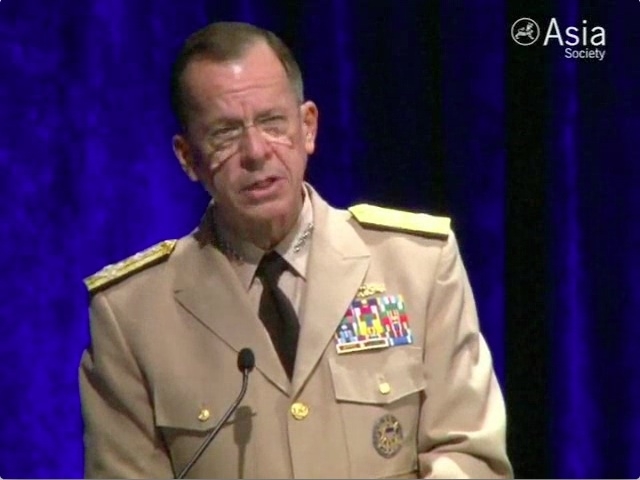 WASHINGTON, June 9, 2010 - Admiral Mike Mullen, Chairman of the US Joint Chiefs of Staff, said he is "genuinely concerned" about China's increasing military ambitions and "the gap... forming between China's stated intent and its military programs."

The Admiral also expressed his disappointment over the recent rejection by China of an invitation by the US for military-to-military contact, since such collaborations offer the opportunity to "listen and to learn from and about each other."

Mullen made his remarks at Asia Society Washington's 2010 Awards Dinner, where he received the Public Policy Award on behalf of America's two million armed forces.

Saying the recent sinking of a South Korean naval ship by North Korea was an "egregious breach of the fragile peace on that peninsula," Mullen called on Beijing and the international community to take a tougher stand on the issue.

Asia Society Washington Chairman Leo A. Daly III kicked off the evening at the Ritz-Carlton, which was attended by more than 350 guests, including dignitaries and diplomats from more than 20 countries and the US Congress.

Kong received the International Business Award. He said CITIC, which was formed in 1979, exists only because of Deng Xiaoping's forward-thinking market reforms. CITIC was one of the first Chinese firms to invest overseas.

Kong helped CITIC navigate its role as both a state-owned enterprise, which must implement state policy, and a Western-style private enterprise, with a focus on long-term growth.

Shirin Sharmin Chaudhury, Bangladesh's State Minister for Women's and Children's Affairs, was recognized with the Humanitarian Service Award, for her work on gender equality and the empowerment of women. Chaudhury outlined her innovative approach, which involves increasing the economic participation of women through all options, including self-employment and even "construction work."

"Women are often denied access to assets. We need more gender-responsive budgeting," she said, noting that both the World Bank and most development economists agree, "empowering women is smart economics."

Earlier in the day, Asia Society President Vishakha Desai led a group of some 90 Asia Society Board and advisory council members on a visit to key US government leaders, including Senator Jay Rockefeller, son of the Asia Society's founder, John D. Rockefeller, III.

She explained mutual cultural understanding was critical to "informing and also forming policy" in order to "build a community of like-minded leaders," a core mission of the Asia Society. "Learning about the people and cultures of Asia must be the backbone of policy making," said Desai.