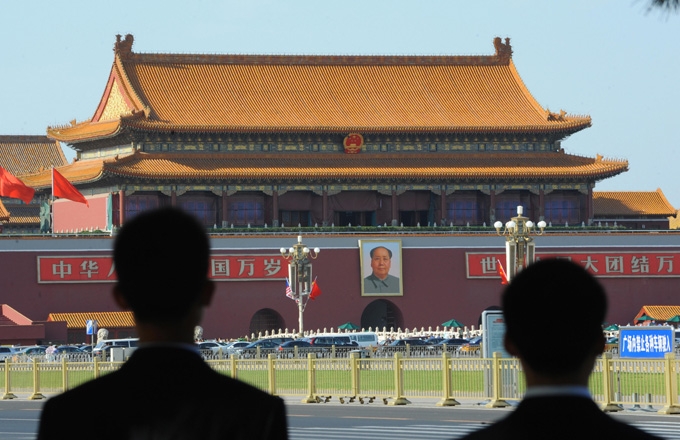 Ever since 1989, Chinese leaders have been haunted by the fear that their days in power are numbered. The regime was shaken to its roots by six weeks of student protests in more than 130 cities and the divisions within the Communist Party leadership over how to handle them. The regime remained standing only because the military followed Deng Xiaoping's order to use force to disperse the demonstrators.

Just months after the crackdown, the Berlin Wall was torn down, a popular uprising overthrew the Romanian communist dictatorship, and communist regimes in Eastern Europe were toppled in rapid succession. The Soviet Union itself, the strongest communist power the world had ever seen, collapsed two years later. China's leaders watched with horror and had every reason to believe they could be next.

Today, two decades after the "life-and-death turning point" of Tiananmen, Chinese Communist rule has survived, but its leaders remain anxious about the possibility of another revolutionary challenge. To foreigners, China appears like an emerging superpower, strong economically and influential internationally; but its Communist leaders feel much weaker as they struggle to stay on top of a society roiled by thirty years of market reform and opening to the world.

Although never publicly articulating it, the Chinese Communist Party has devised a formula for survival based on the lessons they drew from the Tiananmen experience. First, prevent large-scale protests. Second, avoid public leadership splits. And third, keep the military loyal to the Party.

The three rules are interconnected. If the leadership group remains cohesive despite the competition that inevitably arises in it, then the Party and the security police can stop the protests from spreading. Unless people receive some signal of "permission" from the top, protests are likely to fizzle out or be extinguished before they grow politically threatening. But if the divisions among the top leaders come into the open as they did in 1989, people will take to the streets with little fear of punishment. Then, if the military splits too, or refuses to use force to defend the Party leaders, the entire regime could collapse. For the past twenty years, with the spectre of another Tiananmen crisis haunting them, China's leaders have worked hard to shore up all three fronts -- social quiescence, elite unity, and military loyalty.

The fear of large-scale protests makes economic growth a political imperative for China's leaders. The economic boom and improvement of living standards discourage people from rocking the boat politically. The CCP calculates that the economy must grow at a certain annual rate (7 or 8 percent) to create enough jobs to prevent widespread unemployment and labor unrest.

Anxieties about unrest have spurred the central government to address problems that anger the public, such as taxes on farmers, environmental pollution, tainted food and medicine, and inadequate health care. But getting the local officials to implement central policies is a persistent dilemma for central leaders.

The possibility of gradually introducing direct elections from the bottom-up as Taiwan successfully did has been on the table for decades, but the CCP leadership has felt that its hold over society was too tenuous to risk losing control over the selection of officials, which is the linchpin of Party rule.

In the absence of elections, Beijing increasingly relies on the media and Internet to serve as watchdogs over local officials. Central officials have learned that when they suppress news of epidemics like SARS, tainted food and medicine like the melamine in baby formula, environmental disasters like the poisoning of rivers by chemical plants, it aggravates crises. The trend is to allow the media to report problems—official mouthpieces like the Xinhua News Agency are beginning to publish exposes and reporting protests—but to spin the coverage so the public is persuaded that the government is competently solving problems.

Worries about political unrest also cause China's leaders to do everything they can to impede organized collective action against the regime. Every organization must be licensed and its leadership approved by the political authorities.

Party leaders go all-out to prevent Internet activism from spilling over into the streets. Using ingenious filtering technologies, site managers who screen and censor postings, paid stooges who post pro-government views, and career incentives to encourage self-censorship, the Party maintains a surprising degree of control, but not air-tight control, over Internet content.

At the same time, China's leaders are hyper-responsive to media and online public opinion. CCP leaders are particularly sensitive to nationalist criticism. They are well aware that the previous two dynasties, the Qing and the Republican government, both fell to revolutions in which the discontents of various groups were fused together by the powerful emotional force of nationalism. Foreign policy related to Tibet and other issues that arouse popular nationalism is motivated in large part by political self-defense. When Chinese Netizens were infuriated by the March 2008 violent attacks by Tibetan protestors against Chinese shopkeepers in Lhasa and the feeble government response, the leaders reacted by vilifying the Dalai Lama and intensifying their campaign to isolate him internationally.

Whenever protests over domestic issues do break out, central leaders deflect blame away from themselves to local officials; buy off the demonstrators by satisfying their economic demands, and punish the organizers.

The CCP leaders appear to have learned the lesson of Tiananmen. If they don't hang together, they could hang separately, as the Western saying goes. Still, each individual politician has moments of temptation, when an interest in gaining more power for himself might cause him to exploit a crisis situation and reach out beyond the inner circle to mobilize a mass following, as many Chinese officials believe that Zhao Ziyang attempted to do during the Tiananmen crisis (Zhao denies this charge in his recently published memoirs).

Changes in the mass media heighten the risk of the public being drawn into elite disagreements. To reduce this risk, the CCP bans all reporting of leadership competition or decision-making at the top, even though the Hong Kong media has provided lively and sometimes accurate analyses of Beijing politics for many years.

Beginning with Deng Xiaoping, CCP leaders introduced fixed terms of office, term limits, and mandatory retirement age to regularize leadership competition and prevent splits. When Jiang Zemin, having reached the age of seventy-seven, retired as CCP general secretary (2002) and president (2003), it was the first time that a leader of a large communist country had ever handed down power to a successor without putting up a fight of dying.

Today's leaders—President Hu Jintao, Premier Wen Jiabao, and the seven other members of the Politburo Standing Committee—constitute an oligarchy that strives to prevent divisions among themselves or at least to hide them from the public. The top leader is first among equals, reversing the decades of domination by the top leader. Judicious balancing of major institutional constituencies—the party apparatus, government agencies, and representatives of the provinces—in the Politburo and its Standing Committee is aimed at inhibiting any one group from dominating the others.

On the surface, relations within the CCP's inner circle appear impressively smooth even in the face of the tension created by China's current economic downturn and this year's important political anniversaries. But in a society undergoing explosive change, political outcomes are unpredictable because the political game is evolving too.

When Deng Xiaoping led China, he was so confident of the loyalty of the PLA that he squeezed it financially in order to concentrate on the civilian economy. Official defense spending stayed almost flat during the 1980s at a time when investments in the domestic economy were dramatically increasing.

Today's leaders have not served in the military, and cannot count on its automatic allegience. Hu Jintao, like Jiang Zemin before him, lavishes resources on the PLA to make sure that he can count on it to defend him. Defense spending has risen in real terms and as a percentage of GNP since 1999. Official military spending has increased at double-digit rates up to the present.

Today, twenty years after the Tiananmen crisis, most Chinese citizens probably have forgotten all about it, or been kept ignorant of it because of the official silence imposed by the Chinese Communist Party. The memory of Tiananmen is felt most intensely by China's leaders who still worry that it could happen again.

Susan Shirk is an Arthur Ross Fellow at the Asia Society Center on US-China Relations.