Far from Geography: A «Free and Open Indo-Pacific» 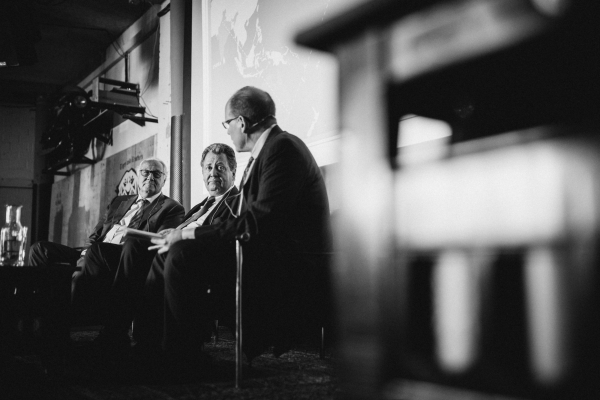 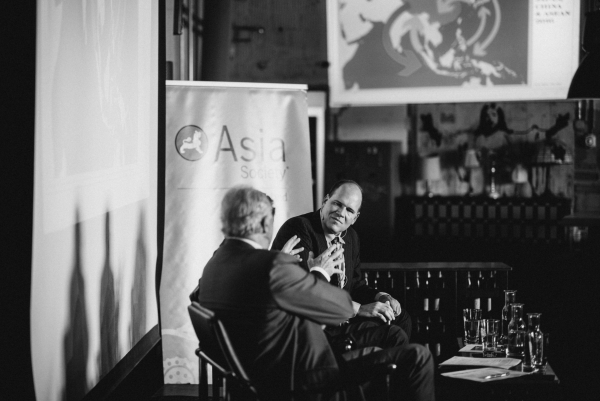 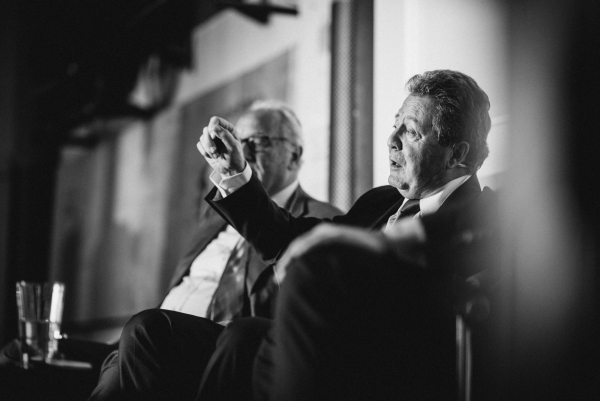 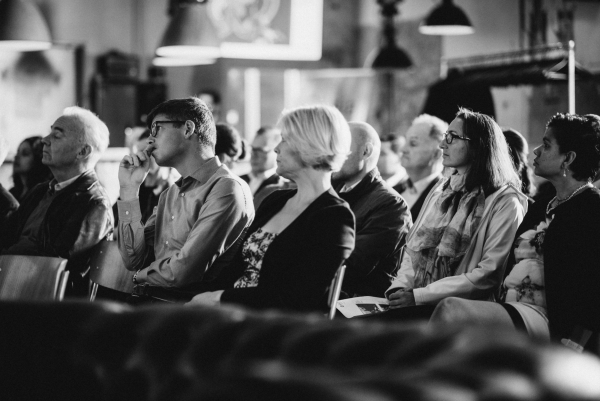 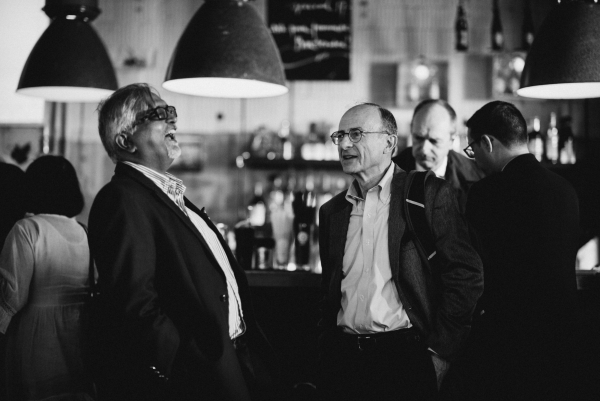 Among the many regional organizations in Asia one in particular has made headlines recently: the «free and open Indo-Pacific». An initiative by India, Australia, Japan, und the U.S. – officially held as a Security Dialogue – brings these very different countries together. On September 25, 2018, former Swiss Ambassador to India, Philippe Welti, and former Swiss Ambassador to Australia, Daniel Woker, have talked with U.S. citizen and long-time Japan resident Jeffrey Bohn, head of the Swiss Re Institute, about the meaning of the concept, whether a different description would be more accurate and the true intentions of each county behind promoting a «free and open Indo-Pacific».

Jeffrey Bohn lead through the discussion with a cartographic angle – on the basis of four maps:

What is the Indo-Pacific? 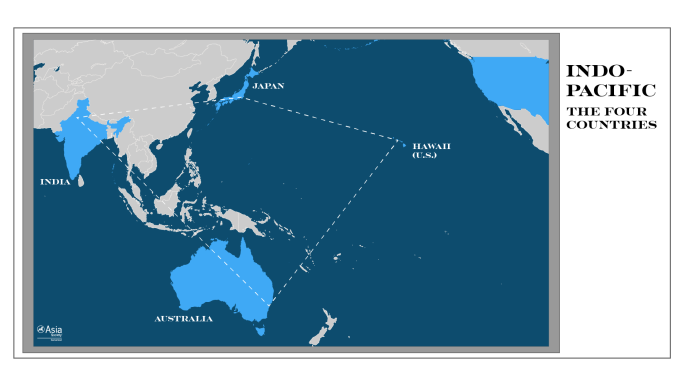 In 2017 India, Japan, Australia, and the U.S. have restarted the «Quad» (short for Quadrilateral Security Dialogue), an approach that first emerged ten years earlier but had been suspended in the meantime. They promote the concept of a «free and open Indo-Pacific» and regularly use the expression as a fixed term.

Philippe Welt explained that the term itself has maritime roots, first mentioned by an Indian naval officer and shortly thereafter taken up by Japanese Prime Minister Shinzo Abe during his first term in 2007. To Welti it is clear: the four countries do not think of the «free and open Indo-Pacific» in geographic terms, but in strategic terms with an explicit intention.

Is the only intention to counterbalance China’s growing influence, economically and geopolitically? Daniel Woker, answered: yes and no. Yes: against Chinese assertiveness in the region; and no: because «the elephant is already in the room», meaning China’s actions are a reality that cannot be prevented, but only reacted to. 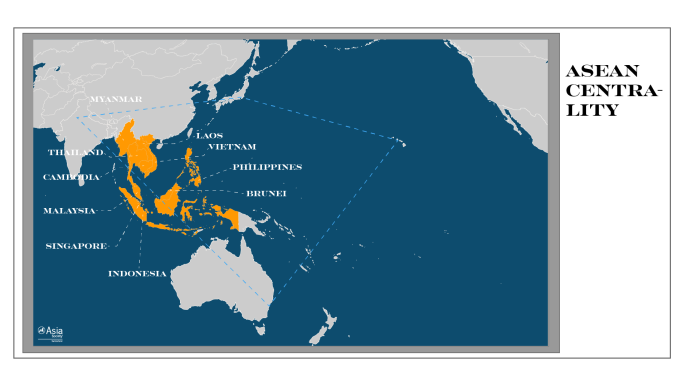 They are hesitant to join, though, because the term does not even contain the word «Asia» – a fact that resonates poorly in an organization that thinks of itself as «truly Asia» (a slogan originally coined by Malaysia), as Daniel Woker pointed out. And Philippe Welti added: Almost all of them have disputed borders with China and most of their trade happens on maritime routes that, to them too, need to be «free and open».

What shapes the relationship of the ASEAN countries to China, Woker explained further, is an interplay of current developments and historical legacies: As important as China is economically to all of these countries, they also emphasize being respected as sovereign states, bearing in mind that a lot of these countries have a recent history of colonial occupation.

Woker added: One of the first actions of the newly (re-)elected Malaysian Prime Minister Mahatir Muhamads was to tell China – more or less – to go away. However, this has not translated in any of the already existing projects around the «Belt and Road Initiative» (BRI) in Malaysia being suspended – they are only halted.

India & the Chinese String of Pearls 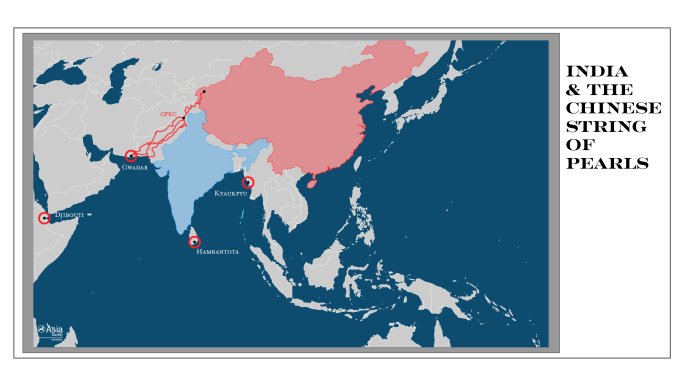 All countries have their own understanding of the term Indo-Pacific, which becomes very clear in the case of India.

The former Swiss Ambassador to the country, Philippe Welti, explained that the two giants India and China were allies as developing countries until China took a different road with communism. As for India, the trauma of losing the border war against China in 1962 in the Himalayans remains active and drives India’s dream of overtaking China both demographically and economically.

Today, as for most neighbors, India has friendly relationships to China. As the map shows, India is surrounded by a Chinese «String of Pearls»: deep water ports in the East, South and West, and the numerous infrastructure project around the China-Pakistan Economic Corridor (CPEC) running along its Western border – all controlled by China. But India’s foreign policy acts smartly, as Welti puts it, reacting to the situation in many different ways. One: Officially denying that there is such a thing as the String of Pearls – what does not exist must not be met with measures. Two: It builds its own deep water ports, like in Iran to bypass the port in Pakistan. Three: Taking care of its Russia relations as well as the relations to the U.S. Four: Promoting a «free and open Indo-Pacific». Welti emphasized that in an Indian context the term can absolutely be understood as a confrontation with China, invoking India’s British legacy of democracy and the rule of law. And in this well rounded package of reactions lies India’s smartness. 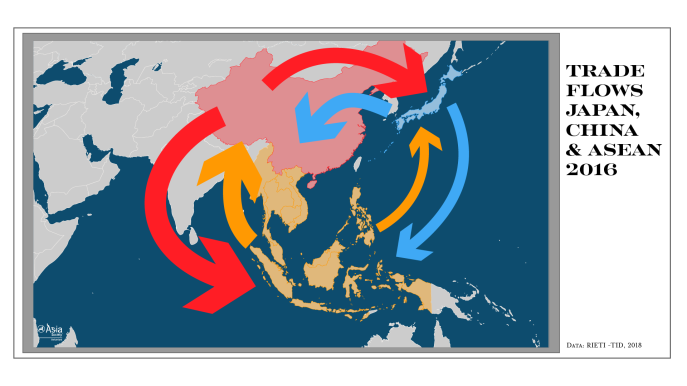 Japan, as a driving force behind the «free and open Indo-Pacific» as well as a major investor in the whole region, seems to challenge China in the role of the leading power in the region. With the U.S. slowly retreating from the region – or at the least becoming an unpredictable force – shifts happen all around. Japan plays its cards aiming at jumping into that gap.

Moderator Jeffrey Bohn pointed out that under Prime Minister Shinzo Abe Japan’s military improved a lot. He is even aiming at an amendment of Article 9, the clause in Japan’s constitution banning war as a legitimate mean. Japan at the same time is heavily investing in Thailand and Myanmar.

Economics obviously play a large role in the region that is not only interconnected through trade of goods – as seen in the map – but also in value and production chains, as Daniel Woker added. He reminded us also, closing the talk, that trade flows don’t prevent confrontation: «To trade with each other doesn’t mean that there are no strategical interests.»

Read our «Behind the Scenes» interview with ambassadors Philippe Welti and Daniel Woker here: A Life as Ambassador

Philippe Welti is the former Swiss Ambassador to India and to Iran. He retired from the Swiss Diplomatic Service after an impressive career, during which he acted as Political Director of the Swiss Defence Ministry, in diplomatic postings in Bonn, London and New York. Before joining the diplomatic service in 1979, he served as liaison officer in the Swiss delegation NNSC to Korea in the DMZ. He is president of the Economic Chamber Switzerland-Iran (ECSI), member of the London-based International Institute for Strategic Studies (IISS) and co-founder of «Share-an-Ambassador – Geopolitical Coaching».

Daniel Woker is the former Swiss Ambassador to Kuwait, to Singapore and to Australia. He studied in Geneva, Zurich and the US, and soon after joined the Swiss Foreign Ministry where he had postings in Belgrade, at the UN Mission in New York, in Stockholm and in Paris. Back in Berne he acted as Development Officer, Deputy Director for Europe and the first Director of the Geneva Centre for Security Policy (GCSP). His present publishing activities concentrate on the greater Asia Pacific and on an international perspective of Swiss foreign relations. He worked as a Senior Lecturer at the University of St. Gallen and is co-founder of «Share-an-Ambassador – Geopolitical Coaching».

The event was moderated by Jeffrey Bohn, Director of the Swiss Re Institute. Bohn has extensive knowledge about Asia, having served as the head of Risk and Regulatory Financial Services consulting practice at PWC Japan as well as having established the Portfolio Analytics and Valuation Department within State Street Global Markets Japan in Tokyo. He further served as head of Portfolio Analytics and Economic Capital at Standard Chartered Bank in Singapore.