A Life as Ambassador | Asia Society Skip to main content

A Life as Ambassador

Philippe Welti and Daniel Woker on Their Careers as Ambassadors, Their Experiences in Asia and Their Collaboration 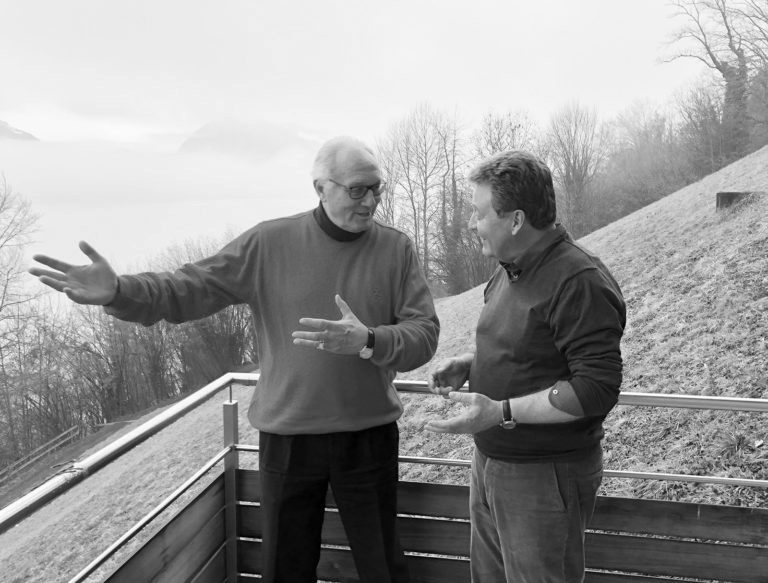 A concept that was recently highly discussed in the media was the 'free and open Indo-Pacific'. In an event in late September, we invited the former Ambassador to India, Philippe Welti, and the former Ambassador to Australia, Daniel Woker, to assess the concept's meaning based on four explanatory cartographical maps. Before the event, we had the chance to talk to both of them about their professional careers, their experiences in Asia and their collaboration under 'Share-an-Ambassador'. Thereby, we found out that the idea for 'Share-an-Ambassador' was actually born at one of our events in 2016.

Anna Zwald: How did your interest for the Asian continent come about?

Philippe Welti: My first experience with and in Asia was my appointment in the Neutral Nations Supervisory Commission in Korea in the 1970s. There, I discovered that China is culturally for Asia what Greece and Rome are for Europe: the regional cradle of civilisation. Later, I discovered the mythical “Orient” with my ambassadorial mission to Iran. That was magic! After Iran came the posting to India. Since then, I see Asia and its dramatic development through Indian eyes.

Daniel Woker: My first ambassadorial position was on the Arab side of the Persian Gulf, then six years in Singapore, then Australia.  I covered the greater Asia-Pacific from its Western to its Eastern fringe with a long stay in its heart - South East Asia. During all these years, I came to realize how game-changing the developments in Asia were to become for the rest of the world. The transformation of the continent into the most dynamic and defining region for the future stability of the world led everyone to look eastward.

From your experiences: How strong are Asian influences noticeable in countries situated at Asia’s geographic border such as Australia or Iran? How did it change?

Daniel Woker: In Australia, you can clearly observe how the growing influence of Asia in the world has changed their outlook. Having adopted a western culture their close ties reached to that side of the world for centuries. This has changed very much. Australia’s trade relations and engagement with Asian countries increased exponentially and surpass its economic bonds with the US and Europe. Furthermore, Australia in itself became more Asian. Sitting in a café in Sidney today, you can witness this change. Newspapers and signages in Chinese are frequent and the number of Asian expats and tourists are very high.

Philippe Welti: Iran is “Western Asia”, but Persian and Iranian culture, which always had its own understanding of “centrality”, had historically a strong orientation towards the West, i.e. Europe, beyond its Turkish, Arab and Central Asian neighbours.

What particularities have the two of you noticed over the years when it comes to dealing with Asia?

Philippe Welti: That’s a difficult question to answer considering the size and diversity of Asia. I think what we have to keep in mind when speaking about Asia is that there is much less cohesion than in other continents. There is not “one Asia”. Asia must be seen as a compilation of very different universes: the Indian, the Chinese, the Japanese universe – each of them with its own strong identity of “centrality”, plus South East Asia, which I do not know closely.

What recommendations can you give to someone who strives for a similar professional career?

Philippe Welti: Most importantly to be curious. Curious for different cultures, conventions and ways of living. Beyond curiosity, it is important to be able to develop some sort of liking for these different societies and civilisations. Surely, an interest for global politics and developments is essential but, as the years have proven, ambassadors come from all kinds of backgrounds.

Daniel Woker: A good diplomat is thoroughly familiar with her/his guest country's framework and background but does not try to integrate into its society. He understands but stays at arm’s length.

When did the collaboration between the two of you begin? How did you meet?

Philippe Welti: We actually met way before we both entered the diplomatic service as ambassadors: In high school. Both of us played handball and we bumped into each other when practicing or at games and other sports related events. Later on, we then met over work within the Ministry, i.e. the Department of Foreign Affairs. To be frank, working as an ambassador one ends up having many colleagues but only a handful of friends. Daniel became one of them. Somehow, we always enjoyed a particularly good professional exchange whenever we met. Furthermore, I frequently read his political reports on the countries he was positioned which were written with journalistic flair.

Daniel Woker: Besides feeling flattered (grins at Philippe), I can only return that compliment. With Philippe mutual understanding and interest in each other’s endeavours was always given. Whenever we came together we had an insightful exchange and talked even over far distances. So, over the years, we developed a friendship.

What was your motivation to found ‘Share-an-Ambassador’?

Daniel Woker: The idea for ‘Share-an-Ambassador’ actually came up in 2016 at one of the first events of Asia Society Switzerland on the topic “What’s next for Iran?”. Philippe Welti was one of the two speakers while I was sitting in the audience. During the event I realized how Philippe’s first-hand insights and experiences of his time as an ambassador in Iran were not only absorbed by the guests but also considered highly valid contributions to reflect on the issue.

Philippe Welti: During the subsequent aperitif, our conversation circulated around that even though we were retired, we did not have to halt our professional initiatives. Having been engaged in the foreign service for so many years, I did not only acquire an in-depth knowledge on global politics and the countries I have been deployed, I also understood how to assess current affairs. We both felt an intrinsic motivation to share what we have learned over all the years. Therefore, we decided to set up ‘Share-an-Ambassador’, a platform offering coaching enabling clients to do their own geopolitical due diligence, indispensable at the beginning of all trans-border economic and commercial activity.

Ambassador Philippe Welti is the former Swiss Ambassador to India and to Iran. He is president of the Economic Chamber Switzerland-Iran (ECSI), member of the London-based International Institute for Strategic Studies (IISS) and co-founder of «Share-an-Ambassador – Geopolitical Coaching».

Ambassador Daniel Woker is the former Swiss Ambassador to Kuwait, to Singapore and to Australia. Back in Berne he acted as Development Officer, Deputy Director for Europe and the first Director of the Geneva Centre for Security Policy (GCSP). His present publishing activities concentrate on the greater Asia Pacific and on an international perspective of Swiss foreign relations. He is co-founder of «Share-an-Ambassador – Geopolitical Coaching».

Ambassadors Philippe Welti and Daniel Woker joined us on September 25 2018 for an event on the topic of the Quadrilateral Security Dialogue (QUAD), also known as the «free and open indo-pacific». Read our recap of the event here: Far from Geography: A «Free and Open Indo-Pacific».