Stephen Roach: A Hard Look at the Next Asia | Asia Society Skip to main content

Stephen Roach: A Hard Look at the Next Asia 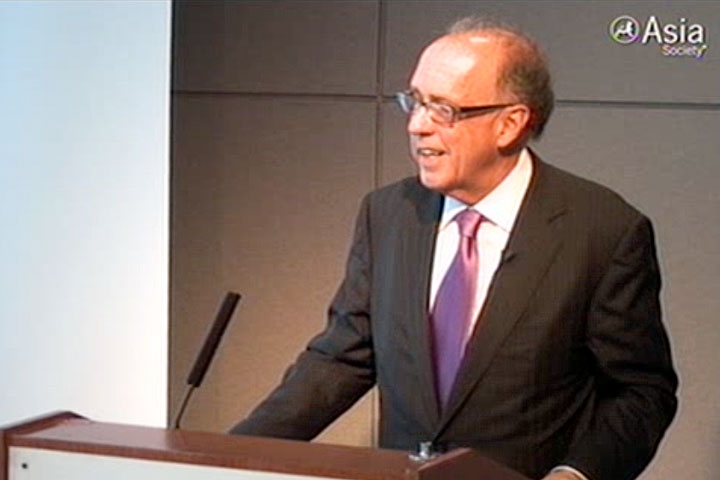 NEW YORK, September 30, 2009 – “The Next Asia” must balance its export-driven economy by increasing private consumption in order to survive the global economic crisis and become sustainable, according to Morgan Stanley Asia Chairman Stephen Roach.

He said the reality is that Western consumption of Chinese exports will remain low for years to come. No consumer in the Western world is more important in supporting the Chinese model than the US consumer, and neither model is sustainable.

Roach, author of the new book Stephen Roach on The Next Asia, recommends building social security, private pensions, and unemployment and medical insurance in order to encourage domestic spending.

“Asia… hasn’t done enough to now emerge as an engine of the global economy .... Seemingly it’s going to take a different Asia.” Asia, and particularly China, will not be able to face the ongoing economic crisis or lay down the foundations for a sustainable economy if exports increase and consumption decreases, he argued.

Roach said that domestic spending in China must be promoted in order to change the current “fear-driven or precautionary savings” which has increased from 27 to 37 percent since the turn of the century. The key to improving the consumer sector is creating safety nets so when thousands loose their jobs, they can survive.

Although China’s economy is strong on the surface, according to Roach, a deeper look shows an unbalanced, unstable, uncoordinated, and unsustainable economy. “This place is an export machine,” said the Morgan Stanley Asia Chairman.

Referring to Chinese Premier Wen Jiabao’s comments at the recent World Economic Forum in Dalian, Roach said that the recovery in the first half of this year was urgent and necessary, but fragile and based on an unbalanced model. Furthermore, export growth decreased to negative 25 percent in 2009 compared to a +25 percent the previous year.

In Roach's follow-up conversation with moderator John Delury, Associate Director of Asia Society's Center on US-China Relations, the question was raised: how does a one-party socialist system function with the rise of personal freedoms that come with consumer consumption? Roach said there is a need for widespread government and legal reform, and a role for all regions of China to aspire to higher living standards.

Looking into the growth of other Asian nations, and away from China’s macro story of savings, infrastructure, and foreign investment, Roach said India is on a different track: a micro story with better balance, rule of law, democracy, and a well-educated, IT-savvy, English-speaking population, albeit without sufficient infrastructure.

Stephen Roach on The Next Asia is available from AsiaStore.