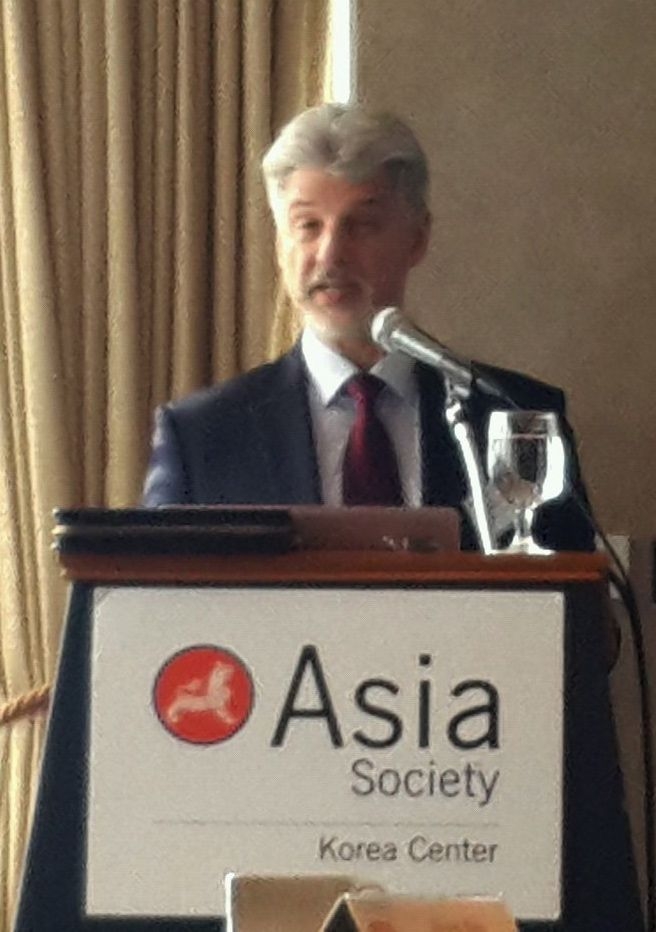 Ambassador Fabian, who is the Ambassador of Romania to the Republic of Korea, explained the political process that Romania went through when the government changed from a highly centralized communist regime to a democracy with a market economy. This was demonstrated through Romania’s shift in relationship with Korea, specifically in regards to the transition between being a close fraternal friend with North Korea in 1971, to becoming a strategic power with South Korea in 2008. Through a close examination of the case study regarding Romania’s transition from a communist government to a democratic government, Ambassador Fabian gave an extraordinary insight into the difficulties a country faces when changing its fundamental political ideology. This case study has valuable information that could be used when considering North and South Korea’s possible reunification and political and economic ramifications that could become evident.

Using the Conceptual Change Model of Kurt Lewis, Ambassador Fabian answered fundamental questions about why Romania decided to change from a communist system with a highly centralized government, to a democratic system. Those questions included why and how the shift happened, specifically examining the balance between the cost and benefits of a government change.

In 1971, Romania’s president, Nicolae Ceausescu, visited North Korea and was inspired by Kim Il-Sung’s cult of personality, as well as North Korea’s Juche philosophy of total self-reliance. Coming back to Romania, he issued widespread reform of the communist system modeled on North Korea’s government through his July Thesis. This thesis contained 17 proposals that would help to create a more centralized state. These policies were practiced by the regime of Ceausescu until there was a shift of government in December of 1989. During this time period, Romania was in the Frozen Stage of Lewis’s model.

According to Lewis’ model, the events of December1989 were the trigger that initiated the Melting Stage. This stage allowed Romania to begin the transition from the communist regime of Ceausescu, to a democratic government. “No exotic facts triggered the stage. Lower orders cannot react independently of the upper order, and when resources become exhausted, collapse or revolution follows,” said Ambassador Fabian. Finally, after this stage occurred, Romania went through a transition and stabilization stage, the final stage of Lewis’ model.

According to Ambassador Fabian, “In the early 1990’s, Romanian society was enthusiastic in embracing democracy, but as the process began, it became increasingly difficult to reconcile new changes with the old regime.” The new government faced a number of issues which included social, political, and economic challenges. Through the work of civil society, NGO’s, and an emerging middle class, Romania was able to slowly transition their government and society from a highly controlled and centralized state. Thus they gained many freedoms foreign to Romanians, such as freedom of speech, movement, and transparency of the system. It has taken the Romanian government over 20 years to fully change their system and become a powerful player in Europe as well as the rest of the world.

The enduring legacy of this change is the realization, as Ambassador Fabian put it that, “This was a complex process with steps forward and back. After two decades of homework, Romania has been able to learn how to manage conflicting relations between two different systems in terms of values, mentalities, basic concepts of functioning institutional structures, and economic mechanisms.”