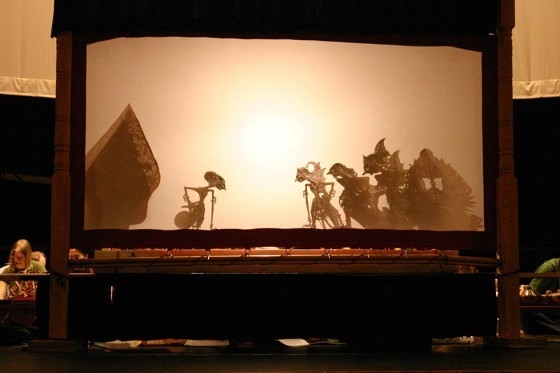 Wayang Kulit, an Indonesian form of shadow puppetry, holds the audience’s attention with riveting storylines executed masterfully by the dhalang, or puppeteer. The puppets are made of buffalo hide and intricately designed, down to the most minute detail of costume and color, to help the audience distinguish between the different characters.

The dhalang tells the stories of kings, princesses, ogres, and knights, using deft hand movement and narration. While traditional performances used cotton sheets and oil lamps to create the play of light, electric bulbs or other sources of light are used today. Many of the plots draw from episodes seen in the Hindu epics Ramayana and Mahabharata. Wayang Kulit was declared a Masterpiece of Oral and Intangible Heritage of Humanity by UNESCO in 2003.

Can’t make it to this program? Tune in Saturday, May 14, at 8 p.m. New York time for a free live video webcast. AsiaSociety.org/Live

In advance of Asia Society's presentation of wayang kulit on Saturday, we spoke to Rachel Cooper, Asia Society's director of Global Performing Arts and Special Cultural Initiatives, about this unique art form.

How popular is Wayang Kulit as an art form today? Has the form had an influence beyond Indonesia?

Shadow puppetry has been popular in various parts of the world, including China, India, and Turkey, but it has reached an extraordinary level in Java. It is usually performed in an eight to nine hour performance that goes all night.

Wayang kulit combines deep spiritual meaning, entertaining storytelling, extraordinary musicality (both in the gamelan and vocals), deep philosophical messages, current political commentary, and bawdy humor. It is one of the most complete art forms, with everything in the hands of the dhalang. A good dhalang is indeed a celebrity who commands a high fee and can perform in front of audiences as large as 6 or 7,000 people.

What are some of the distinctive features of a performance that differentiate it from other forms of puppetry?

Javanese shadow puppetry involves distinctive puppets that are art works in themselves. The gamelan orchestra is comprised of between 20 and 40 musicians and is made up of bronze instruments — gongs, metalaphones, strings, and vocals. It is one of the great art forms as it combines ancient stories, mystical mantras, and topical commentary.

In 2012, Asia Society presented a wayang kulit performance by Ki Purbo Asmoro. Click here to watch part one of this performance, and here for part two. In the below clip, the wayang kulit features an appearance by none other than Barack Obama who, of course, spent part of his childhood in Indonesia.