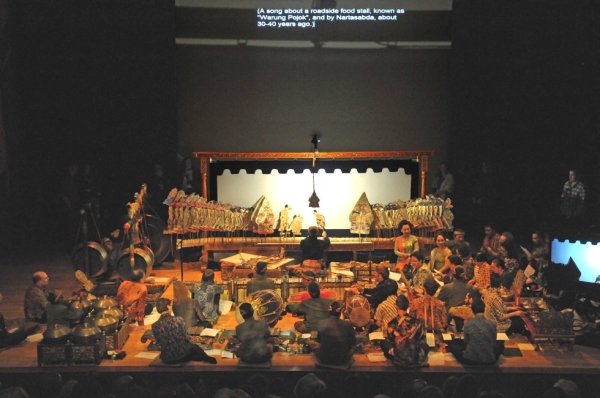 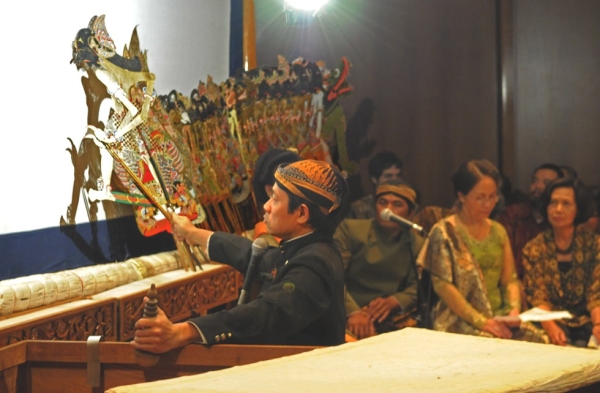 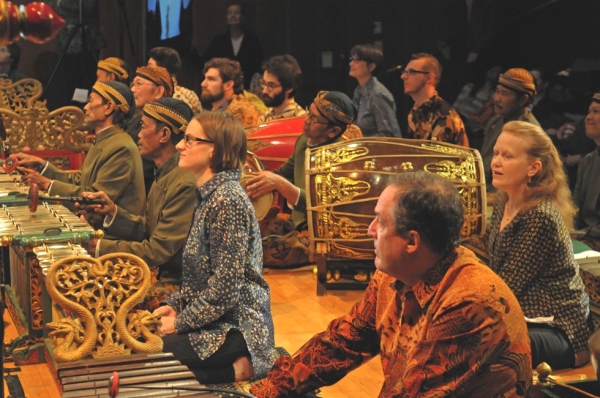 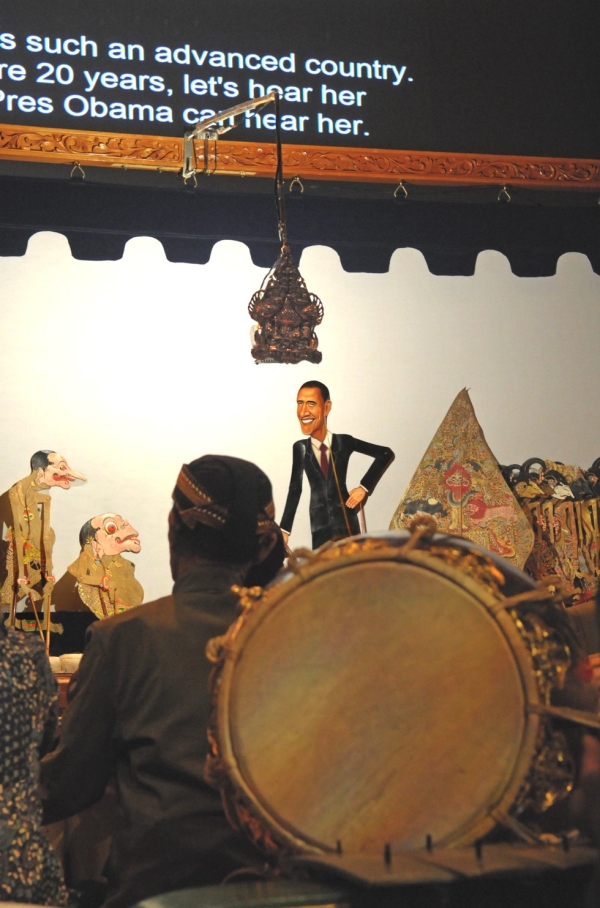 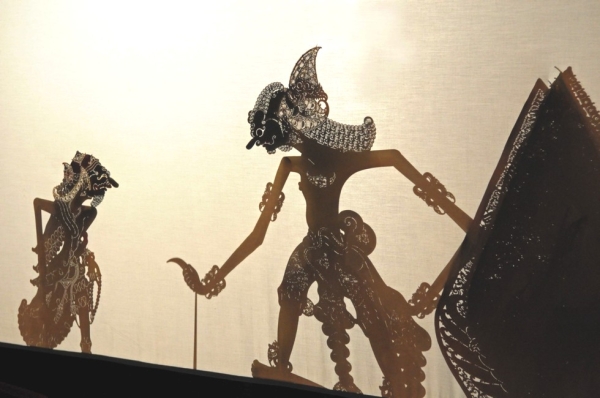 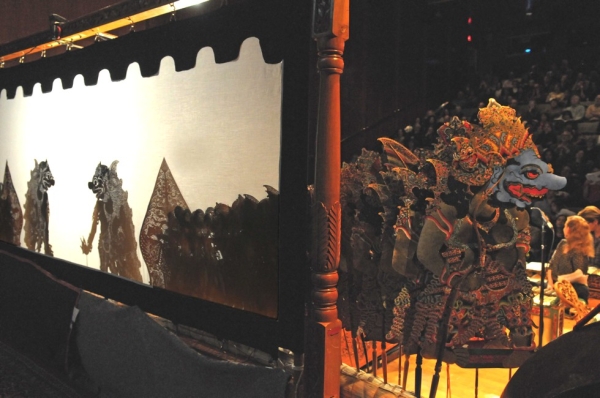 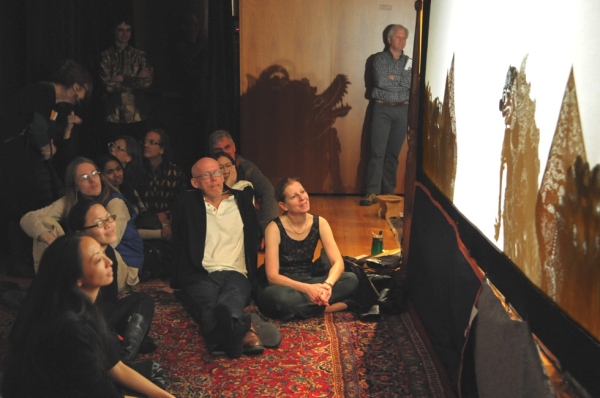 President Barack Obama has been called lots of things since he moved into the White House, but a sold out audience at Asia Society New York Friday night got a big surprise when he made an appearance as a puppet. Obama's cameo came during a performance of the ancient Javanese art of wayang kulit, commonly called shadow puppetry, which for centuries has been a way of telling stories, from myths and legends to topics of contemporary importance.

In his meeting with one the major Javanese clown characters, Bagong, Obama talked about spending four years growing up in Jakarta, and the clown gave him some budgeting advice — reallocate funds from war to arts and education. This scene, which was a comic interlude in the 3.5-hour performance by Ki Purbo Asmoro, in many ways exemplifies the art of wayang kulit. The puppeteer must be able to meld the story with music, comedy, local politics, philosophy and tradition. This dhalang (puppeteer) is perhaps Java’s most popular, easily garnering 3-4,000 attendees to his performances. At Asia Society, he was assisted by the expert simultaneous translation of Kitsie Emerson, 10 members of his Mayankara Gamelan troupe and 30 members of New York gamelan group, Gamelan Kusuma Laras.

Read The Village Voice's take on the evening here.

Rachel Cooper is Director of Cultural Diplomacy at Asia Society.

Rachel Cooper is the Director of Culture as Diplomacy initiative at Asia Society, a global not-for-profit institution devoted to building bridges of understanding across policy, arts and culture and education.   She is widely recognized as a leader in arts and culture and was the head of Asia Society’s renowned performing arts and cultural programs department for 27 years prior to taking this new position. She has produced and toured over 600 performances and developed new collaborative projects between Asia and the United States. She is a fierce advocate for the live arts and the artists who create in real time on a spectrum across definitions, from contemporary to traditional, from culturally specific to globally inclusive.   Some of the major projects she has helped create include New Voice in Screenwriting Fellowship, India, Dance the Spirit of Cambodia, Creative Voices of Muslim Asia, and NY City-wide Muslim Voices: Arts and Ideas Festival, Crossovers: the Performances of Asia America; Festival of Song; India Pakistan. She has worked with a wide range of artists – from hip hop to classical, from those based in heritage to the most experimental, including Yin Mei, Malavika Sarrukai, Bun Ching Lam, Yoyo Ma, Vijay Iyer, DJ Spooky; Shahram Nazeri, Sharmeen Obaid Chinoy and Meryl Streep among many others.  Culturally  traditional performanceshave included Korean Chindo Sikkim Kut, Indonesia’s Court of Yogyakarta, Burmese Saing Waing.Asian American artists such as Ma-Yi Theater, Keo Woolfrod, Roberta Uno, Jon Jang, Brenda Wong Aoki, Mark Izu, Rudresh Mahanthappa, Parul Shah, among others.

Cooper’s work focuses on process, cultural context, and relationship, exploring the connections between arts, culture, community and contemporary society. She is a frequent participant at major conferences and a commentator in the media from CNN to the NY Times. She has also served as an advisor or panelist for major international projects and institutions in the United States and Asia, including the Smithsonian Institutions, including the One Shared World, National Endowment for the Arts, US State Department, CenterStage ,Doris Duke Foundation for Islamic Arts, Aga Khan Music Initiative, Jaipur Literary Festival, among others.

Cooper received the Global Citizen Diplomacy Award for Best Practice in the Arts Award, Dawson Award for Programmatic Excellence from the Association of Performing Arts Professionals, Manhattan Award for Preserving Cultural Diversity in New York City, and a Rockefeller MAP award for choreography. From 1989-1993, she directed the Festival of Indonesia In Performance, bringing over 200 artists from Indonesia on 12 different tours across the United States.  She serves on the boards of Cambodian Living Arts, American Indonesian Cultural Foundation. Cooper is the co-founder and former director of the California-based Balinese music and dance company, Gamelan Sekar Jaya in1979. She lived in Indonesia from 1981-88. She studied at UCLA in World Arts and Cultures and Dance Ethnology.

Rachel Cooper directs the Culture as Diplomacy Initiative at Asia Society as leader in global culture.  Cooper’s explores the connections between culture and contemporary society. She is a frequent participant at major conferences and a commentator in the media addressing Asian performing arts, international arts exchange, and cultural diplomacy. She served as advisor and panelist for major institutions, including the  US State Department CenterStage, Duke Foundation, Smithsonian Institution, NEA, Aga Khan Music Initiative.

Cooper has received numerous awards including Borough of Manhattan Award for Preserving Cultural Diversity, a Global Citizen Diplomacy Award for Best Practice and Award for Sustained Programmatic Excellence from APAP. She directed the Festival of Indonesia InPerformance, bringing over 200 artists from Indonesia on 12 different tours across the United States. She did her undergraduate and graduate studies at UCLA in World Arts and Cultures and Dance Ethnology. Cooper conducted research in Indonesia from 1983-1988.