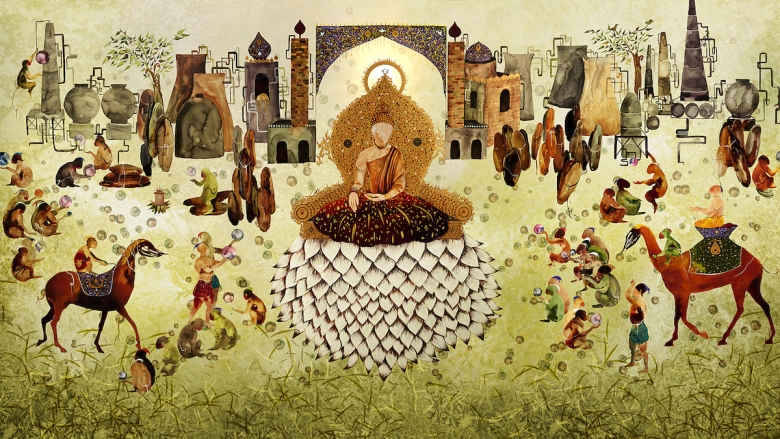 Shiva Ahmadi’s paintings, sculptures, and animations offer a critique of contemporary political conflicts through the tradition of Persian miniature painting. The artist first became interested in politics during the American invasion of Iraq in 2003 and while her compositions most often focus on tensions within the Middle East and between East and West, Ahmadi is ultimately interested in examining the relationship between absolute power and corruption. The artist was born in 1975 in Tehran, Iran, and currently lives and works in the Bay Area, California. She received a BFA in painting from Azad University in 1998 and MFA degrees from Wayne State University in 2003 and the Cranbrook Academy of Arts in 2005. Lotus is a single-channel video installation inspired by two Buddha sculptures from the Asia Society Museum Collection. The piece references Ahmadi’s 2013 painting of the same title. This recent foray into video animation allows the artist’s richly intricate narratives to come to life. The viewer is introduced to a bucolic scene that depicts the enlightened Buddha sitting atop a blooming lotus throne, and surrounded by his loyal monkey subjects, who bear offerings of delicate bubbles. As the narrative progresses, the monkeys’ bubbles turn into bombs and grenades while their behavior grows violent. As the Buddha begins to participate in the ensuing chaos, his appearance becomes increasingly warrior-like. The landscape changes into a dystopia filled with war and destruction as the once enlightened leader is transformed into a common tyrant.