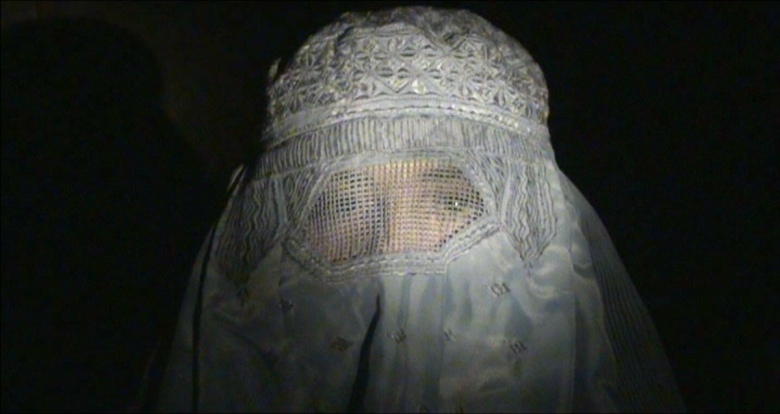 Born in Kabul, Rahraw Omarzad fled to Pakistan during the first Taliban regime but later repatriated, serving as the founding director of the Center for Contemporary Arts Afghanistan and supporting the Women’s Center for the Arts. Having embarked on a second chapter of living in exile when he and his family sought asylum in Italy last October, he acknowledges the weight of the responsibility of helping artists who remain at risk in the country and of establishing connections across the growing Afghan diaspora.

The Third One depicts a woman in a chadri (known as burqa in other regions). Completely shrouded except for her eyes, she is sequestered in a windowless space and becomes further separated from the viewer by a suspended black cloth. The soundtrack—a vaguely sinister, intermittent hammering sound—heightens the feeling of unease. As an unidentified hand begins to cut holes into the cloth with large sewing shears, the woman proceeds to embroider the holes with floral patterns. She is handed the scissors, which she throws to the ground, seemingly unable to free herself from the constraint of the cloth. Her inability to cast off the restricting barriers of the black cloth and her own chadri reflects the crippling effects a dictatorial regime has on the psyche.