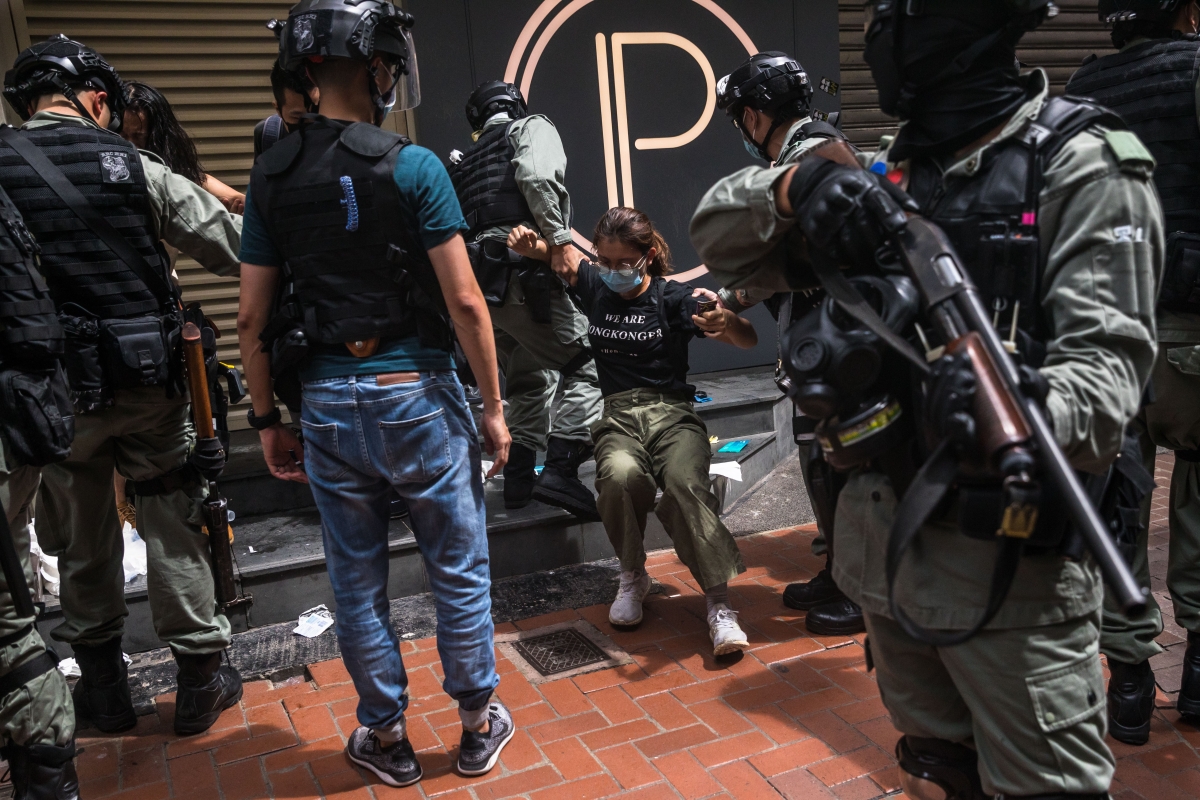 Riot police detain a woman as they clear protesters taking part in a rally against a new national security law in Hong Kong on the 23rd anniversary of the city's handover from Britain to China. - Hong Kong police made the first arrests under Beijing's new national security law as the anniversary of the city's handover to China was met by thousands defying a ban on protests (DALE DE LA REY/AFP/Getty Images).

China’s new national security law for Hong Kong is already having an impact in Hong Kong itself and in reactions around the world. Authorities in Beijing and Hong Kong claim that the law was needed to maintain security in Hong Kong and will apply to “an extremely small minority” of “troublemakers.” But the law’s passage has drawn fire from democracy advocates and raised concerns among business leaders, educators, and ordinary citizens about its effect on the autonomy that Hong Kong has enjoyed. What will the new law mean for the institutions that distinguish Hong Kong from Mainland China – a free press, independent judiciary, and supportive environment for international business and investment? How will the measure affect Hong Kong’s and China’s relations with the global community? What does the new law means for the “one country, two systems” principle under which Hong Kong has flourished since the 1997 handover from British rule?

Natasha Khan covers business and companies in Asia, as well as the Hong Kong, for The Wall Street Journal. An English, Cantonese and Mandarin speaker, she holds bachelor’s degrees in both law and business and a Master's in Journalism from the University of Hong Kong. Before joining the Journal in 2017, she spent six years at Bloomberg News, where she was a core reporter on the team that produced “Revolution to Riches” in 2012. The series, which uncovered the financial holdings of China’s ruling class, won a number of honors, among them the George Polk Award for Foreign Reporting and the Overseas Press Club Award for Best Investigative Reporting. She has also received accolades -- including from the Society of Publishers in Asia and as a finalist for a Livingston Award for Young Journalists -- for her reporting on women’s health issues in India, and on cancer and bankruptcy in China.

Christine Loh is Chief Development Strategist at the Hong Kong University of Science and Technology. She was Under Secretary for the Environment in the Hong Kong Special Administrative Region Government (2012-17) and a Member of the Hong Kong LEGCO (1992-97 and 1998-2000). She has been active in public policy and politics since the 1980s. She founded and was the CEO of the non-profit think tank, Civic Exchange (2000-12), and helped to established several non-profit organizations in Hong Kong related to the environment, equal opportunity, arts and culture, as well as human rights. She is currently a board member of the Robert HN Ho Family Foundation, board member of CDP Worldwide, board member of the Global Maritime Forum, member of the BASF Stakeholder Advisory Council, and an Advisor to the WYNG Master Award in photography. She also teaches a course on non-market risks at the Anderson School of Management, University of California at Los Angeles.

Andrew Sheng is Distinguished Fellow at the Asia Global Institute. He is Chief Adviser to the China Banking Regulatory Commission, a board member of Khazanah Nasional Berhad, Malaysia, a member of the International Advisory Panel to the Australian Treasury’s Financial System Inquiry, and an advisor to the United Nations Environment Program Inquiry into the Design of a Sustainable Financial System. He also serves as a member of the International Advisory Council of the China Investment Corporation, the China Development Bank, the Advisory Council on Shanghai as an International Financial Center and the International Council of the Freie University, Berlin. He is also an adjunct professor at the Graduate School of Economics and Management, Tsinghua University and the University of Malaya, Kuala Lumpur. In 2009, he became the Pro-Chancellor of Universiti Tun Abdul Razak. He served as Chairman of the Securities and Futures Commission of Hong Kong from 1998 to 2005, having previously been a central banker with the Hong Kong Monetary Authority and Bank Negara Malaysia. He also worked with the World Bank from 1989 to 1993. His most recent book is entitled From Asian to Global Financial Crisis: an Asian Regulator’s View of Unfettered Finance in the 1990s and 2000s. In April 2013, he was named by TIME magazine as one of the 100 most influential people in the world.

Daniel Russel (moderator) is Vice President for International Security and Diplomacy at the Asia Society Policy Institute (ASPI). Previously he served as a Diplomat in Residence and Senior Fellow with ASPI for a one year term. A career member of the Senior Foreign Service at the U.S. Department of State, he most recently served as the Assistant Secretary of State for East Asian and Pacific Affairs. Prior to his appointment as Assistant Secretary, Mr. Russel served at the White House as Special Assistant to the President and National Security Council (NSC) Senior Director for Asian Affairs. During his tenure there, he helped formulate President Obama’s strategic rebalance to the Asia Pacific region. Prior to joining the NSC in January of 2009, he served as Director of the Office of Japanese Affairs and had assignments as U.S. Consul General in Osaka-Kobe, Japan (2005-2008).

This program is made possible in coordination with the Asia Society Policy Institute.