The Russian Invasion of Ukraine: One Week Later 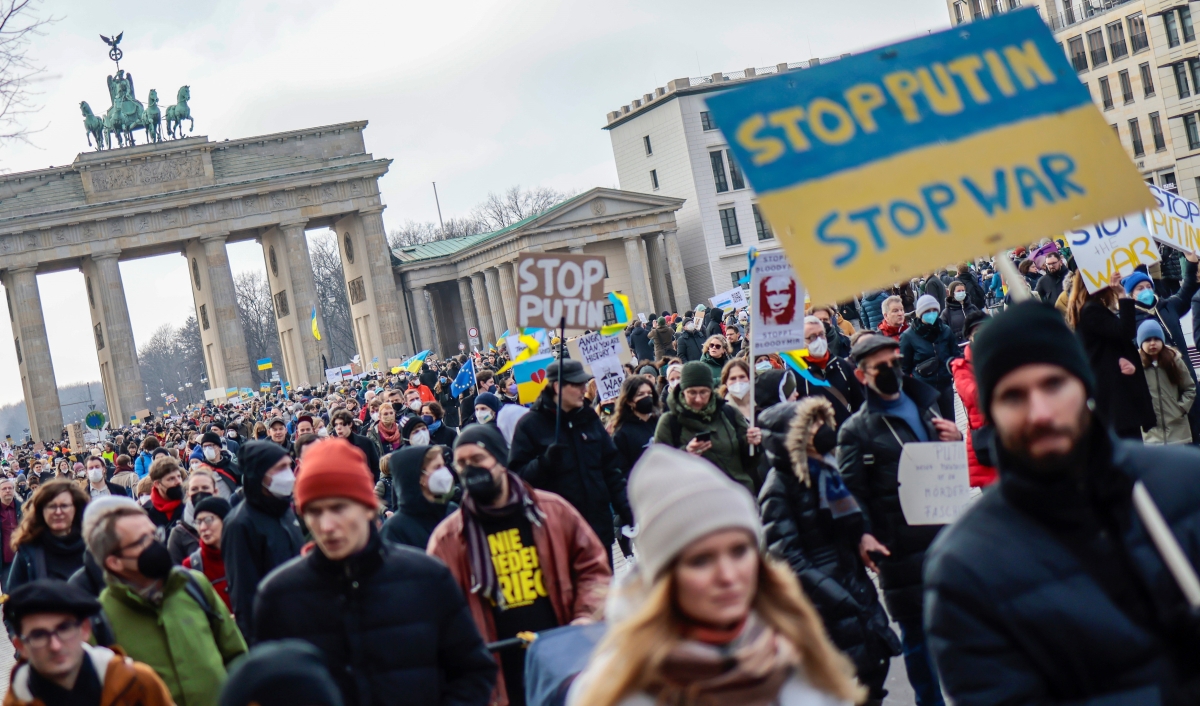 People gather at Brandenburg Gate to protest against the ongoing war in Ukraine in Berlin, Germany. Battles across Ukraine are raging as Ukraine seeks to defend itself against a large-scale Russian military invasion (Hannibal Hanschke/Getty Images).

It has now been over a week since the Russian invasion of Ukraine began, and its impact is being felt beyond Europe where a large scale political and humanitarian crisis is now unfolding. As part of the international community’s reaction, Russia is already facing a range of sanctions, including removal from the SWIFT banking network, and there has been large scale corporate divestment from many Russian companies. The United Nations General Assembly has also overwhelmingly voted to condemn Russia and demanded that Moscow cease fighting and withdraw its troops. What is Vladimir Putin’s calculus, and how much impact will the international community’s reaction have as well as domestic political opinion in Russia? What will therefore ultimately bring an end to the conflict and what could this look like? And what more can be done, including by those in Asia?

Join us for a special conversation chaired by Asia Society President and CEO the Hon. Kevin Rudd AC, with former Prime Minister and Foreign Minister of Sweden the Hon. Carl Bildt, European Parliament member for Poland the Hon. Radoslaw Sikorski, and the Center for New American Security's Andrea Kendall-Taylor, for another look at the crisis in Ukraine.

The Hon. Carl Bildt is the World Health Organization's Special Envoy for the Access to COVID-19 Tools Accelerator. He served as both Prime Minister and Foreign Minister of Sweden. Under his leadership, the government initiated major liberal economic reforms and negotiated Sweden’s accession to the EU. Previously, he served as EU Special Envoy to the former Yugoslavia, High Representative for Bosnia and Herzegovina, UN Special Envoy to the Balkans, and co-Chair of the Dayton Peace Conference. He also chaired the Global Commission on Internet Governance. He has served on various boards, including of the Centre for European Reform, the International Institute for Strategic Studies, the European Policy Centre, the Council on Foreign Relations in New York, the European Council on Foreign Relations, and as the first non-U.S. member of the Board of Trustees of the RAND Corporation.

The Hon. Radosław (Radek) Sikorski is a member of the European Parliament for Poland, sitting on Committees for Foreign Affairs, the Special Committee on Artificial Intelligence and the Security and Defence Subcommittee. He is the Chairman of the Delegation for relations with the United States. He is also a Senior Fellow at the Center for European Studies at Harvard and Distinguished Statesman at CSIS in Washington D.C. He was Poland’s Minister of Defence (2005-2007), Foreign Minister (2007-2014) and Speaker of Parliament (2014-2015). He served as a war reporter in Afghanistan and Angola. From 2001-2005 he was Resident Scholar at AEI and director of its New Atlantic Initiative. Together with Carl Bildt, he launched EU’s Eastern Partnership. He proposed and helped to set up the European Endowment for Democracy. In 2014 he led the EU mission to Kiev, which stopped the bloodshed on the Maidan.  Foreign Policy magazine named him one of 100 global policy intellectuals ‘for speaking the truth even when it’s not diplomatic.’  He is the author of several books, most recently Polska Może Być Lepsza.

Andrea Kendall-Taylor is a Senior Fellow and Director of the Transatlantic Security Program at the Center for a New American Security (CNAS). She works on national security challenges facing the United States and Europe, focusing on Russia, authoritarianism and threats to democracy, and the state of the Transatlantic alliance. Prior to joining CNAS, she served for eight years as a senior intelligence officer. From 2015 to 2018, she was Deputy National Intelligence Officer for Russia and Eurasia at the National Intelligence Council (NIC) in the Office of the Director of National Intelligence (DNI). Prior to joining the NIC, she was a senior analyst at the Central Intelligence Agency (CIA) where she worked on Russia and Eurasia, the political dynamics of autocracies, and democratic decline. She is an adjunct professor at Georgetown University’s School of Foreign Service. Her work has been published in numerous political science and policy journals, including the Journal of Peace Research, Democratization, Journal of Democracy, Foreign Affairs, the Washington Post, the Washington Quarterly, and Foreign Policy.