In the Green Room | Asia Society Skip to main content

In the Green Room

A Concert Layering Legacies of Women in Jazz 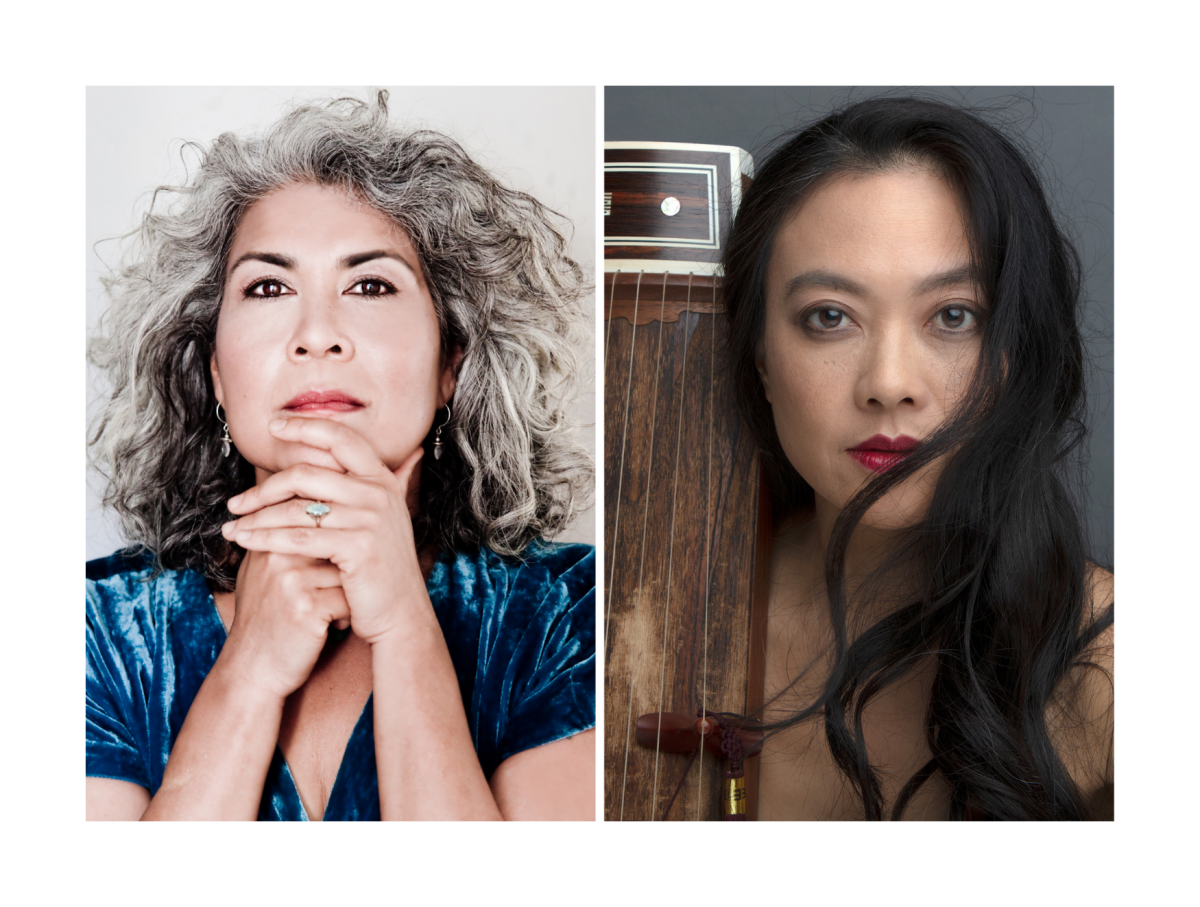 Join us for the world premiere of In the Green Room, a dynamic music performance conceived by composer/vocalist/multi-instrumentalist Jen Shyu, “an extraordinary voice” (The New York Times) and composer/pianist Sumi Tonooka, “provocative and compelling” (The New York Times). Shyu and Tonooka are joined by drummer/composer Terri Lyne Carrington and bassist/composer Linda May Han Oh.

Harnessing the power of music and storytelling, this group of acclaimed artists draws upon their own personal stories as well as those of important women in jazz, to reclaim and amplify their legacies. The weaving of these extraordinary stories creates an intimate portal into the living histories passed down through music and relationships across generations.

Funding for In the Green Room: Layering Legacies of Asian and Black American Women in Jazz is provided by the Doris Duke Charitable Foundation. Additional funding has been provided by the Asia Society Performing Arts Fund and Helen and Will Little.

In the Green Room: Layering Legacies of Asian and Black American Women in Jazz comprises performances, a series of video interviews with women in jazz who have inspired Shyu and Tonooka, and interactive workshops with a cohort of millennial women jazz musicians.

This project is part of Creative Inflections, a first-of-its-kind initiative of the Doris Duke Charitable Foundation that supports leading jazz artists to partner with presenting organizations in innovative collaborations that enable artists to take creative risks and expand the genre’s listenership by attracting younger and more diverse audiences.

Shyu has produced eight albums as a leader available on her label Autumn Geese Records. Her critically acclaimed Sounds and Cries of the World (2015) landed on many best-of-2015 lists, including those of The New York Times, The Nation, and NPR. Her album Song of Silver Geese (2017), was also included on The New York Times’ Best Albums of 2017. “When I Have Power” from her album Zero Grasses: Ritual for the Losses made NPR’s “Best Songs of 2021” list. Jen is co-founder of M³ (Mutual Mentorship for Musicians) with Sara Serpa and is a Steinway Artist.

Pianist, composer, Sumi Tonooka is a world class artist and composer in the business of jazz and music making for forty years, performing in venues and jazz festivals nationally and internationally. With twelve recordings to her name and a vast catalogue of compositions in genres symphonic, chamber, dance, and film, Tonooka continues to be a creative force. Most recently Tonooka is a 2020 winner of the Emerging Black Composers Project, a ten-year commissioning partnership co created with the San Francisco Symphony and San Francisco Conservatory of Music, 2020 Doris Duke Awardee for In the Green Room, a collaborative composer commission with vocalist/composer Jen Shyu and 2019 winner of Chamber Music America’s New Jazz Works grant. Recent recordings include a third release, Afrika Love with Alchemy Sound Project, a composer-led ensemble, founded by Tonooka. Afrika Love received Best of Year Jazz recordings in DownBeat magazine 2021. Tonooka studied with MaryLou Williams, Dennis Sandole, Bernard Peiffer, Stanley Cowell, Don Sebesky, and Charlie Banacos. Her first professional gig and jazz mentor was Philly Joe Jones, Le Grand Prix. In addition to her symphonic and chamber works, jazz recordings and performances, Tonooka has composed over twenty film scores, including the 2015 documentary, Mary Lou Williams, The Lady Who Swings The Band, Academy Award-nominated Family Gathering by Lise Yasui and Daring To Resist by Martha Lubell, which aired on PBS.

Terri Lyne Carrington is an NEA Jazz Master, Doris Duke Artist, and three-time Grammy award-winning drummer, composer, producer, and educator. She serves as Founder and Artistic Director of the Berklee Institute of Jazz and Gender Justice, as well Artistic Director for both Next Jazz Legacy program (a collaboration with New Music USA) and the Carr Center in Detroit, MI. She has performed on more than 100 recordings over her 40-year career and has toured and recorded with luminaries such as Herbie Hancock, Wayne Shorter, Stan Getz, Esperanza Spalding, and numerous others. Her artistry and commitment to education has earned her honorary doctorates from York University, Manhattan School of Music and Berklee College of Music, and her curatorial work and music direction has been featured in many prestigious institutions internationally. The critically acclaimed 2019 release, Waiting Game, from Terri Lyne Carrington + Social Science earned the esteemed Edison Award for music and a Grammy nomination. In fall of 2022, she authored two books, Three of a Kind (about the forming of the Allen Carrington Spalding trio) and the seminal songbook collection, New Standards: 101 Lead Sheets By Women Composers, accompanied by the album new STANDARDS vol.1 (Candid Records) and installation, New Standards, at Detroit’s Carr Center, as part of the Jazz Without Patriarchy Project.

Based in New York City, Linda May Han Oh is a bassist/composer who has performed and recorded with artists such as Pat Metheny, Kenny Barron, Joe Lovano, Dave Douglas, Terri Lyne Carrington, Steve Wilson, Geri Allen and Vijay Iyer. Originally born in Malaysia and raised in Boorloo (Perth), Western Australia, she has received many awards including a 2022 Deutscher Jazz Preis, 2nd place at the BASS2010 Competition, a semi-finalist at the BMW Bass competition and an honorary mention at the 2009 Thelonious Monk Bass Competition. She was voted the 2018-2021 Bassist of the Year by the Jazz Journalist’s Association, as well 2022 Bassist of the Year in Jazztimes. She also was voted 2019 Bassist of the Year in Hothouse Magazine and was the 2020 recipient of the 2020 APRA award for Best New Jazz Work. She has had five releases as a leader which have received critical acclaim. Her most recent release “Aventurine” is a double quartet album, featuring string quartet and vocal group Invenio. Linda has written for large and small ensembles as well as for film, participating in the BMI Film Composers Workshop, Sundance Labs at Skywalker Ranch, and Sabrina McCormick's short films, "A Good Egg" and “FracKtured.” Linda also composed and produced music for a collaborative film project with non-profit, “Hoperaisers” based in Korogocho, Kenya. Linda is based in New York City and is currently Associate Professor at the Berklee College of Music and is also part of the Institute for Jazz and Gender Justice. Linda was featured on bass in the Pixar movie "Soul" under the musical direction of Jon Batiste (The Late Show with Stephen Colbert) alongside drummer Roy Haynes.