Making a Difference Through the Arts 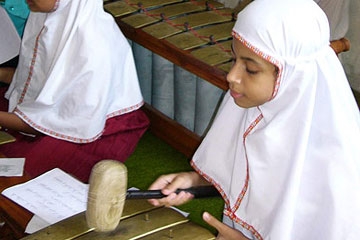 This Asia Society report, Making a Difference Through the Arts: Strengthening America's Links with Asian Muslim Communities, was conceived as an effort to stimulate new thinking and to identify extant resources that can enhance connectivity between the United States and Muslim communities in Asia. It is addressed to a broad range of constituencies: nongovernmental organizations seeking to initiate or expand their own projects; donor organizations active in economic, social, and cultural development; policy makers charged with considering the role of culture in public diplomacy initiatives; academic institutions seeking to enrich international studies programs; advocacy groups, scholars, and journalists; and entrepreneurial individuals with a passion to make a difference. The Asia Society report joins a growing number of recent studies that make a strong case for the role of arts and culture in expanding links between the United States and nations with Muslim-majority populations—Muslim, that is in any of the myriad ways in which Muslim identity may be expressed in the early 21st century.

Though Islamic civilization arose in the Middle East, more than half of the world's 1.6 billion Muslims presently live in Asia. The cultural contexts of Islam in Asia are as varied as the cultures of Asia themselves. In many contexts, Islamic practices and beliefs have syncretized with local forms of spirituality and culture to create exuberant tradition-based languages of art that are strikingly contemporary. These languages range from readily accessible forms of indigenous popular culture to cultivated and highly sophisticated genres of music, dance, theater, painting, and poetry. Other forms of local artistic and cultural creativity that display strong markers of place include handcraft, fashion, film, and cuisine. All of these creative languages embody forms of cultural knowledge that can be "translated," explained, and widely shared as a basis for developing cross-cultural connectivity.

This report offers examples of the diverse ways in which stakeholders in cultural development and exchange initiatives in and with Asian Muslim communities have built successful projects by drawing on culturally grounded knowledge and strategies. The panoramic range of projects, the impressive degree of imagination and innovation with which they have been designed and carried out, and the vital role they serve in fostering cultural pluralism and cosmopolitanism among both Americans and Asians makes these projects—and the people and organizations behind them—worthy of careful attention.

The Asia Society team that researched, wrote, and compiled this report has been fortunate to undertake its work in a political climate that has been supportive of cultural exchange initiatives with Muslim-majority countries. President Barack Obama's June 2009 speech in Cairo reset the tone of American diplomacy and sent a signal that the United States is serious about building stronger ties with the Muslim world. An April 2010 White House conference on entrepreneurship in Muslim-majority countries reinforced that message. Nonetheless, the political atmosphere that frames American relations with Muslim-majority nations and regions remains volatile, underscoring the fragility of cultural exchange and cultural diplomacy.

This Asia Society report complements a 2008 paper produced by the Brookings Institution's Saban Center for Middle East Policy, Mightier than the Sword: Arts and Culture in the U.S.-Muslim World Relationship, which focuses primarily on the Middle East. A number of the Asia Society report's findings and recommendations parallel and underscore those conveyed in the Brookings paper—in particular, the urgency of reaching out to young populations and the vast potential of new media and social networking platforms to do so. At the same time, the present report's focus on Asia rather than the Middle East, as well as the professional expertise of the principal investigators in the world of not-for-profit cultural organizations, academe, and international foundations, has led us to frame the challenges and solutions in a different way than the authors of the Brookings paper.

Next: Six core prinicples and strategies

We agree wholeheartedly with the recommendation of previous reports that arts and culture should play a central role in strengthening mutual understanding between Americans and citizens of Muslim-majority nations. These reports have presented persuasive evidence and arguments to support their position. Our own priority has been to profile actual arts and culture projects and initiatives that provide compelling models for strengthening cross-cultural connectivity, and, in so doing, to illuminate the qualities that make them successful. Consequently, in place of policy recommendations, Making a Difference presents six core principles and strategies synthesized from the empirical case studies featured in the report.

These principles and strategies exemplify best practices in seeding and cultivating cross-cultural connectivity, and are applicable to a broad constituency of interested parties. The six principles and attendant strategies are summarized as follows (see the report's Conclusion for a fuller presentation):

1. Knowledge and accurate information are crucial to strengthening cross-cultural understanding. The arts offer a powerful domain in which individuals and communities can acquire knowledge about the achievements, values, and aspirations of other cultures.

2. Cross-cultural collaborations should be formulated in a way that creates parity and equity between and among collaborators.

Strategy: Build programs from the ground up, rather than the top down, with frequent consultation, sharing of information, and consensus building about tactics.

Strategy: Invest in building relationships with a minimum five- to seven-year time frame, focusing on support for creative work as well as organizational capacity building.

4. Powerful forces for social change are linked to the invention of new technologies, such as the printing press, the Internet, cell phones, and digital media.

5. Rather than viewing cultural production as a mechanism for "monetizing" creativity, culture should be viewed as a unique form of social currency that serves as a positive force in building community.

Strategy: Explore new forms of noncommercial cultural dissemination and sharing (such as the Creative Commons model) that challenge conventional models of cultural ownership.

6. Direct people-to-people connectivity retains an abiding power in the age of the Internet and digital mediation. Events that bring together artists and audiences from different cultures create a frisson—difficult to replicate in mediated forms—that can open new, potentially transformative modes of perception.

Making a Difference Through the Arts is part of Asia Society's Creative Voices of Islam in Asia project and is made possible, in part, by generous funding from the Doris Duke Foundation for Islamic Art and by the New York State Council on the Arts.